New Myanmar Government Must be Inclusive if it is to Succeed 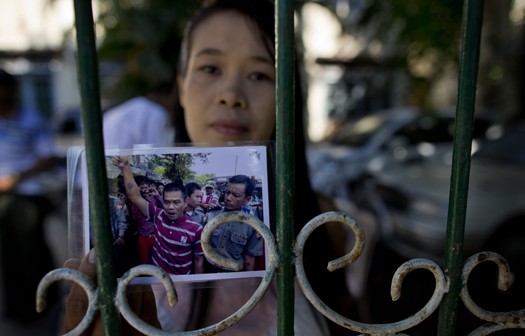 Htin Kyaw spent several months in prison in 2000. In September of that year, when Aung San Suu Kyi was out of house arrest but under restrictions, Htin Kyaw accompanied her to Yangon Central Railway Station, where she and a group of supporters tried to travel to Mandalay. When the station staff refused to sell them tickets, the group declared that they would not leave the station until they were able to buy tickets and board a train to Mandalay.

Htin Kyaw and the others were arrested on the spot, and Suu Kyi was returned to house arrest. Two of the men who were arrested that day, Thein Swe and Tun Myint, were elected to parliament last year.

Throughout the International Center for Transitional Justice’s engagement in Myanmar, we have discussed with many former prisoners their experiences in the past and hopes for the future. For many, everything they suffered would be worth it if they can obtain their goal of democracy.

Htin Kyaw, Suu Kyi and the former political prisoners who now sit in parliament have overcome incredible challenges to be able to participate in the governance of their country. Yet not all former political prisoners are in such a position. Torture, solitary confinement and lack of family ties have led to serious psycho-social challenges for which there are few support programs available.

Political prisoners were far from the only ones to suffer under the past government. Conflict in ethnic minority areas has taken a toll on individual residents and family and social ties in those areas. The military and ethnic armed groups have been accused of widespread sexual violence, child recruitment, torture, forced labor and other serious violations. Conflict areas are economically devastated, deprived of basic services and isolated politically, socially, economically and culturally.

The new government must make a special effort to hear the voices of conflict-affected communities. This includes discussing how they experienced conflict and what they need to overcome its impact and reconcile with the rest of Myanmar. If their concerns are not taken into account, the quality of peace and democracy will be diminished. It may not even be sustainable.

Curbs on the recognition of informal education, lack of identity documents, ethnic prejudice, the Unlawful Association Act, and residency requirements that disproportionately affect minority migrants and refugees are some of the many factors – in addition to active conflict – that prevent people from fully participating in the country’s reform process. Victims of serious human rights violations have particularly difficult challenges, including traumatization, loss of livelihood and lack of trust in government officials – or in anyone from the majority Burman ethnic group.

Htin Kyaw and his administration have a difficult task ahead, but they have been fighting for decades for this opportunity. For the best chance of success, they will need the full participation of people from all walks of life. The NLD has made overtures to the military and members of the former government to ensure their cooperation and participation in a spirit of national unity.

The incoming government would do well to continue this approach by addressing the challenges that prevent some of its citizens from contributing their talents. Beyond improvements in health, education and development, this means targeted programs to address the serious human rights violations suffered by so many over the past decades.

This article was previously published on South China Morning Post.

Download Aileen Thomson's briefing paper "Opening Up Remedies in Myanmar: Understanding the Range of Options for Dealing with Myanmar’s Past".

PHOTO: A Nov. 8, 2013 photo showing Than Than, wife of activist Htin Kyaw displaying a picture of her husband as she waits in a court till her husband was brought for trial in Yangon, Myanmar. Kyaw was found guilty Thursday, Sept. 11, 2014 of disturbing public order — the 11th sentence he has faced. (AP Photo/Gemunu Amarasinghe)