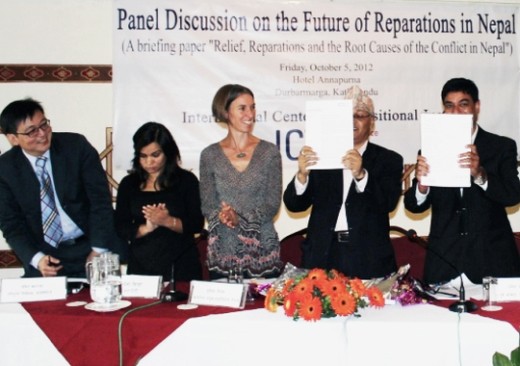 Six years after a peace agreement formally ended the conflict in Nepal, the slow, painstaking process of building the country’s new democracy has yet to provide comprehensive reparation to victims.

To fully acknowledge the experience of victims of the conflict, Nepal’s government should not mistake the issuance of relief through material benefits for the implementation of a comprehensive reparations program.

This is one of the central recommendations of Relief, Reparations, and the Root Causes of Conflict in Nepal, a major new report from ICTJ. The report, released today in Kathmandu, calls for reparations to acknowledge the suffering of victims, consider the root causes of the conflict, and recognize the social and economic circumstances of the victims that they seek to repair.

The war between Maoist insurgents and the Nepali state produced more than 13,000 fatalities, along with torture, illegal detention, abductions, extortion, and widespread disappearances.

As families and communities were torn apart by violence, so too were essential means for survival, such as farm land and small businesses.

The 2006 peace agreement between Nepal’s government and Maoist insurgents led to the establishment of the Interim Relief Program (IRP). So far, the IRP has provided benefits to over 30,000 people who were categorized as “conflict victims” and approximately 80,000 internally displaced persons.

ICTJ welcomes the inclusion of two categories of victims: those who were killed and those who were forcibly disappeared. However, ICTJ’s report identifies a number of flaws that make the IPR fall short of international standards.

During a 2007 interview in Nepal, ICTJ asked whether victims should receive reparations. More than 99 percent of respondents favored them. One female participant in Bardiya reflected on the many ways the violence had disrupted the normalcy of daily economic life: “Killings, disappearances, rape.… A shopkeeper can’t do his business properly. A traveler is stranded midway. A farmer couldn't till his land; a manual laborer couldn't ﬁnd daily subsistence.”

Relief, Reparations and the Root Causes of Conflict in Nepal maintains that reparations are the most tangible form of recognition and redress that states can provide to victims, and they have a two-fold purpose: they are meant to acknowledge the experiences of victims and their families, and they are meant to respond to the loss and material harm resulting from the violation.

So far, the IRP is the only transitional justice measure to be implemented in Nepal: measures to establish a truth and reconciliation commission remain pending, due to concern expressed by victims and the international community over provisions that could provide amnesty for perpetrators of serious human rights violations.

If Nepal’s roots of conflict are to be replaced with the seeds of peace, there can be no trade-off between compensation and accountability. As Nepal undergoes the many phases of dealing with the past, it should act to ensure that reparation programs work in tandem with an integrated approach to transitional justice.

To provide insight on the report and reparative justice in Nepal, ICTJ’s Reshma Thapa is interviewed in this short audio clip. Reshma is the Senior Program Coordinator with ICTJ’s Nepal program.

Photo: ICTJ launches the report "Relief, Reparations and the Root Causes of Conflict in Nepal."