In a briefing paper released on the eve of the International Day of the Disappeared, ICTJ documents the experience of the wives of the disappeared in Nepal and calls for measures to address the poverty, social stigma, and legal limbo they continue to face in their day-to-day lives. 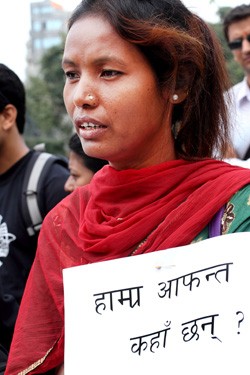 **Kathmandu, August 29, 2013 –**In a briefing paper released today on the eve of the International Day of the Disappeared, the International Center for Transitional Justice (ICTJ) documents the experience of the wives of the disappeared in Nepal and calls for measures to address the poverty, social stigma, and legal limbo they continue to face in their day-to-day lives.

Little is known about the fate of over one thousand victims of enforced disappearance from Nepal's ten-year armed conflict, which ended in 2006. The vast majority were young men picked up by state security forces and never heard from again, others were abducted by Maoist forces. For many, it was their wives and other family members who were left behind to pick up the pieces, feed their families, and search for the truth about what had happened to their loved ones.

The ICTJ paper, Beyond Relief: Addressing the Rights and Needs of Nepal’s Wives of the Disappeared, focuses attention on women in Nepal who were affected by the enforced disappearance of their husband, and the continued effects of this chilling crime.

"Enforced disappearances have an immeasurable impact on the wives of victims. It places them in situations of extreme vulnerability, even as they live with the uncertainty and unresolved pain of losing their husband," says Lucia Withers, head of ICTJ’s Nepal Office.

The paper, based on interviews with over 450 wives of the disappeared across Nepal, highlights the precarious economic situation that often results from the loss of a husband, who is most often the family’s sole breadwinner.

According to the report, the economic burden of supporting the family and children usually falls on the wife who is left behind. While a quarter of the women recalled not having enough before the disappearance, a staggering 70 percent reported not having enough after the crime.

A government-run relief program provides support to some victims of the conflict, including families of the disappeared. But its short-term, mainly financial benefits do not begin to address the complex and often long-term or permanent harms that result from an enforced disappearance.

For the majority of the women, their financial hardship is compounded by Nepali laws that do not recognize the “disappeared” as a legal category, despite a decade of violence that saw over a thousand go missing. Without declaring a husband dead, or without the cooperation of in-laws, a surviving wife cannot inherit land or other property. And without land, it is impossible to secure loans or mortgages or to otherwise achieve some level of economic independence.

In many cases, living with the disappearance of a husband has made women vulnerable to additional abuses. Because the wives of the disappeared are considered neither “wives” nor “widows,” they lack a recognizable social status in Nepali society. Some report discrimination and harassment by neighbors, public officials, and the wider community. Others have been rejected by their husband's family and even blamed for their husband’s disappearance.

Underlying their situation of chronic poverty and isolation is the desperate need to know what has happened to their husband. Despite commitments, the Nepali state has not taken steps to investigate the fate and whereabouts of the disappeared or try those suspected of committing the crime.

"Nepal can do much more to address the rights and needs of these women,” said Kelli Muddell, director of ICTJ’s Gender Justice program. “Most often it’s the wife, sisters, or mother who must pursue the fight for justice. So reforms to establish the legal status of victims of enforced disappearance and prioritize land title for the wives of the disappeared would help alleviate some of the ongoing consequences of these crimes.”

Other recommendations outlined in the ICTJ paper call on the government to provide stronger inter-ministerial coordination to improve responsiveness to victims and establish a full reparations program that addresses the rights and needs of the wives of disappeared and other victims.

PHOTO: A wife of a victim of enforced disappearance from Nepal’s indigenous Tharu community, carrying a sign reading, “Where are our loved ones?” The Tharu community was disproportionately affected by disappearances during the country’s 10-year conflict. Santosh Sigdel/ICTJ