Expectations for advancing much-needed justice and dismantling state and non-state criminal networks that persistently violate human rights have been dashed over the past three years in Mexico. Violence and impunity have increased. President Andrés Manuel López Obrador's campaign promises have not materialized in a serious effort to address the lack of security in the country or the justice system’s inefficiency. However, several efforts have persisted, characterized by cooperation among state institutions, civil society, and victims’ groups that not only give hope, but confirm the way forward. 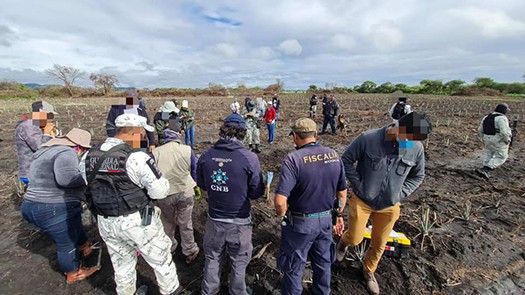 Expectations for advancing much-needed justice and dismantling state and non-state criminal networks that persistently violate human rights have been dashed over the past three years in Mexico. Violence and impunity have increased. President Andrés Manuel López Obrador's campaign promises have not materialized in a serious effort to address the lack of security in the country or the justice system’s inefficiency. However, several efforts have persisted, characterized by cooperation among state institutions, civil society, and victims’ groups that not only give hope, but confirm the way forward.

Despite his approachable manner of speaking, and his initial pledges to demilitarize law enforcement, listen to victims, and seek a comprehensive policy for peace and justice, President López Obrador opted to reverse course and instead take a far less innovative path. He institutionalized the use of the military to combat criminal violence through the creation of the National Guard, but without ever establishing any precise criteria for involving the armed forces in law enforcement operations nor any controls on it. Meanwhile, the new National Guard has had little apparent effect on law enforcement practices. Worse still, the president has refused to listen to those victims or civil society organizations that have been critical of his justice and security policies and has not delivered on his obligation to provide reparation to victims.

Perhaps most troubling, President López Obrador has missed the opportunity to consolidate an independent and effective attorney general’s office according to the legal framework that was defined with civil society’s participation and raised hopes for justice. Quite the contrary, and no doubt because of his authoritarian and narcissistic tendencies, he has restricted the freedom of prosecutors and their ability to effectively combat rising crime, as well as weakened mechanisms that ensure transparency and citizen’s participation, such as the advisory council in the office of the prosecutor which was established by the office’s organic law. Deadly violence against human rights defenders and journalists—already a problem during the previous administration—has only increased, and it has been at least tacitly encouraged by the president’s own polarizing rhetoric and verbal attacks on both groups.

These institutional setbacks contrast with the progress that has been made to advance justice in the Ayotzinapa case involving the 2014 abduction and disappearance of 43 college students in city of Iguala. Leaders in government appointed a special prosecutor and created a truth and access to justice commission, involving the participation of victims, representatives from civil society, and international experts. Both the special prosecutor and the commission have demonstrated resolve in pursuing accountability for crimes that epitomize the culture of impunity that often prevails in Mexico.

Also encouraging, the attorney general’s office and state prosecutors have started using innovative approaches to criminal investigations. In some cases, they have moved away from investigating crimes on a case-by-case basis, in favor of investigative strategies that consider patterns of crimes with a view to dismantling macro-criminal networks. In addition, they are beginning to allow victims and civil society organizations to participate in investigations. These approaches—recommended by victims’ groups and civil society organizations, including during ICTJ-led trainings—were adapted from similar ones that prosecutors in Colombia and Guatemala have use to successfully combat complex organized crime and break up networks involving local authorities. Prosecutors in Mexico have so far applied them in several broad investigations that are now yielding results, such as the recent case in Nuevo Laredo against navy personnel which led to an unprecedented public apology by the country’s navy.

Observable headway has been made in the search for missing persons as well. The government has supported the National Commission for the Search of the Disappeared and established the National Search System and a specialized forensic mechanism—encouraging signs of collaboration among relevant state institutions, victims, and civil society. While coordination remains difficult and progress is often slow, these initiatives have made inroads in identifying the disappeared and addressing the demand for accountability. Moreover, they clearly show the advantages of collaborative approaches involving the state, victims, and civil society, in which each brings to the table a unique perspective and skill set. They also offer invaluable learning about what forms of collaboration are most effective; how to ensure the confidentiality necessary to protect investigations, witnesses, and victims; and what roles different actors should play. Most importantly, they can build trust among public servants, victims, and members of civil society, which is indispensable to advancing this work.

While these initiatives may be incredibly valuable, unfortunately, they alone are not enough to root out organized crime, end impunity, and bring about larger societal changes, given the high levels of violence and the current administration’s militaristic and authoritarian approach to public security. The enormity of the challenge requires a comprehensive approach in which human rights are better integrated. Nevertheless, even if the administration continues on its current path, the positive examples described above offer some hope. The federal government and the attorney general would do well to advance and institutionalize these modalities of work. In particular, they should define mechanisms for allowing victims and civil society to contribute to these efforts, considering their experiences and skills. It is time to strengthen these initiatives, which are producing results. Although modest, they are well directed and collaborative and will improve capacity and provide lessons learned. Both are essential to achieving justice and for a new Congress that is not beholden to the president and has the determination and political will to respond to the demands for security, accountability, acknowledgment and repair, and respect for human rights.