In a Region of Côte d’Ivoire Ravaged by Violence, Traditional Chiefs and Youth Come Together to Build Peace 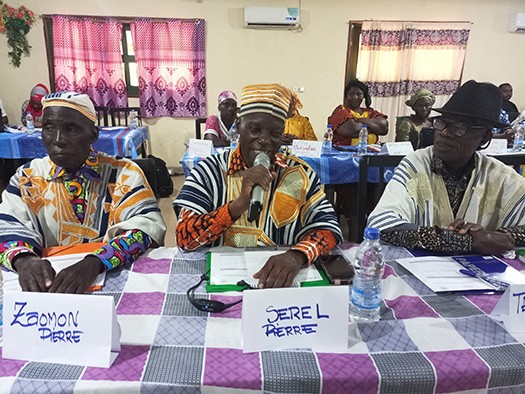 Duékoué, Côte d’Ivoire—Youth activists and traditional leaders from the city of Duékoué, in western Côte d’Ivoire, gathered on October 15 to discuss how best to strengthen social cohesion and prevent future conflict. The city and surrounding region were among the areas most affected by the violence that broke out across the country following the 2010 presidential elections and that left thousands dead and many more injured, beaten, or raped. Convened by ICTJ in partnership with the local chapter of the national youth group Réseau Action, Justice et Paix (RAJP), the daylong workshop centered largely on the aspirations and grievances of young people, as well as how traditional chiefs can help in achieving those aspirations and protect youth from political manipulation and incitement to violence, a recurring problem in the country.

The workshop brought together 50 participants, including 18 traditional chiefs and a diverse group of young activists—seven young women and 10 young men from RAJP, other youth groups, and political parties—as well as leaders of local nongovernmental organizations, the pastor of the nearby Baptist Church, and ICTJ staff members. The event offered a unique opportunity for a frank discussion among groups that are not often perceived as sharing common goals and visions for the future of the country, due to differences in class and age. For traditional leaders to listen to and understand the younger generation and to assume a direct responsibility in fostering social cohesion that takes into account young people’s experiences are great achievements and a sign of hope.

Chiefs of different communities and youth activists expressed a strong, shared commitment to preventing further violence. As one chief put in early remarks, “we in Duékoué know what war is about, […] but we can live together […] we know that we need to listen to each other.” The work ahead, however, entails finally addressing the root causes of the still simmering political tensions, such as social and economic marginalization that young people in particular experience, as well as the consequences of the post-electoral violence, including victims’ ongoing trauma and physical pain for which there has been no true accountability for or acknowledgment by the Ivorian state authorities.

Young people at the workshop conceded that many young Ivorians often feel that violence is the only means available to them to make their voice heard, earn respect, and have a say in decisions. But while young Ivorians often like to say, “if you want to be listened in Côte d’Ivoire, you need to shout,” the attendees unequivocally condemned violence.

The workshop also focused on the vital role that women, particularly young women, can and must play in building peace and preventing violence. At times in the workshop, the young women activists referred to the elders in the room as “their fathers”—out of the respect for them and their experience on the one hand, but also revealing the entrenched patriarchy undergirding Ivorian society on the other. Still, these women did not recoil in deference. Instead, they fully owned the time and space provided to them and spoke to the chiefs eye-to-eye about the importance of including women in the decision-making process, listening to their ideas, and finding solutions together with them. In her remarks, Mariam Bakayoko, an activist from the local organization Association Siguiyonya, said, “I would like to thank ICTJ to always allow youth to speak for themselves and young women to participate, as voices of youth are not only the voices of young men.”

Participants lastly discussed concrete steps for continuing their work together and developed a plan of action to address young people’s aspirations and the exclusion they face before the upcoming presidential elections in October 2020. In Côte d’Ivoire, where the population remains deeply divided along ethnic and political lines, and where the government’s only response to the past political crises has been empty calls for “social cohesion,” all relevant actors in society must demand redress for the harms caused by past violence and work together to prevent the recurrence of violence.

PHOTO: A chief addresses participants at a workshop on social cohesion and preventing violence held in Duékoué on October 15 that brought together traditional leaders and youth activists. (ICTJ)