In this opinion piece, Lucia Withers argues that Nepal's elected parties and their representatives should not limit their discussions to the establishment of a truth commission or whether it will provide for amnesties and/or prosecutions. Rather, they should focus on designing policies that are more comprehensive and that would better serve the rights and needs of conflict victims and contribute to broader peace-building efforts. 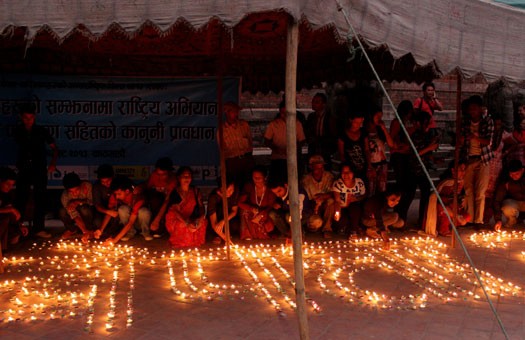 With campaigning for Constituent Assembly elections in its final days, the recognition in political party manifestos of the continuing need for justice for victims of conflict-related human rights abuses is to be welcomed. All the major parties, and some of the smaller ones, have included commitments to establish official truth-seeking mechanisms and provide relief and in some cases broader reparations for victims.

The parties differ in their approaches to truth-seeking and reparations, but commitments are nevertheless made. However, with few exceptions, they ignore other critical components of transitional justice, notably criminal prosecutions and institutional reform, including the vetting of security forces. As such, the manifestos reflect a broader misunderstanding among policy makers that transitional justice is something that can be reduced to a limited truth-seeking exercise and selective benefits for some, but not all, conflict victims.

But transitional justice is a complex, long-term process of mutually reinforcing measures that, only in combination, can effectively achieve justice, facilitate reconciliation and ensure the non-repetition of serious crimes in the future.

It is clear from two separate research projects conducted by ICTJ in the past 18 months involving nearly 1,000 victims or families of victims, that they do not share this limited understanding. Victims and their families consistently tell us that, for them, justice means a broad range of measures, including, but not limited to, a truth commission and relief.

For the most part, victims are positive about the financial benefits offered under the government's interterm relief program; but they regard them as falling far short of the reparative measures needed to adequately respond to the harms they have experienced. These harms have left many physically or psychologically wounded, socially excluded and without the means to make a decent living.

Much hope is still vested in the potential of a truth commission to reveal what happened during the conflict and why; but the notion that it should be a vehicle for amnesties or any form of forced reconciliation is strongly rejected. The desperate need of families of the disappeared to know the fate of their loved ones and recover their remains is consistently raised. However, a truth commission can only do part of the job; much of the work on the disappeared requires a specialized, long-term forensic search process, which could and should be established immediately.

But justice does not end here. A repeated demand of victims is to know who committed the human rights abuses against them or their family members. Many also wish to see those responsible held criminally accountable. This is not only a matter of personal satisfaction; it is also understood as a necessary part of State acknowledgement that crimes were committed and that they will not be tolerated in the future.

Likewise, the removal of individuals involved in the commission of abuses from public office and the security forces is seen as contributing to non-reoccurrence. To that extent, the Election Commission's recent decision that an individual convicted of a conflict-related murder is ineligible to stand for election is a positive step.

Victims also need and expect to be consulted on these matters. Indeed, the effectiveness and credibility of transitional justice processes requires that they respond to victims’ rights and that victims have confidence in these measures. Neither can be achieved if the design of these processes happens in closed-door negotiations among political parties or in government ministries.

The prospect of an elected parliament and government, after 18 months without either, opens new possibilities to rethink the transitional justice agenda in Nepal. The new government, whatever shape or color it takes, should do what previous governments have failed to do – to prioritize the establishment of credible, independent and effective transitional justice mechanisms and to open meaningful processes of consultation with victims.

The elected parties and their representatives should not limit their discussions to the establishment of a truth commission or whether it will provide for amnesties and/or prosecutions. Rather, they should focus on designing policies that are more comprehensive and that would better serve the rights and needs of conflict victims and contribute to broader peace-building efforts, while helping to ensure the establishment of rule of law and the end to impunity in Nepal. In so doing, they should seek the views of those who elected them, including the victims.