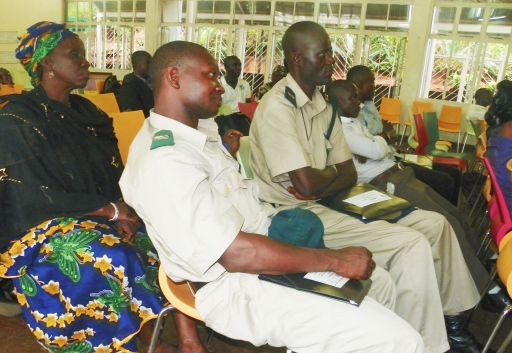 Participants at the launch of the new SL-TRC website in Freetown. Photo courtesy of Open Society Initiative West Africa (OSIWA).

Sierra Leone’s 10-year civil conflict was marked by intense violence against civilians, recruitment of child soldiers, corruption, and a bloody struggle for control of diamond mines.

The Sierra Leone Truth and Reconciliation Commission (SL-TRC) was established to produce “an impartial record of violations and abuses of human rights and international humanitarian law related to the armed conflict in Sierra Leone,” and to “address impunity, to respond to the needs of victims, to promote healing and reconciliation and to prevent a repetition of the violations and abuses suffered.”

The final report of the Commission contains a historical record of human rights violations and provides recommendations for the future. However, after its initial release in 2005, the report became largely unavailable for three years due to the close of the Commission’s website.

In response to a dearth of information on the Sierra Leone TRC report and the peacebuilding and reconciliation process, ICTJ joined its partners, Open Society Initiative for West Africa (OSIWA) and the Human Rights Commission of Sierra Leone (HRCSL) to support the development and hosting of a reconstructed and improved website of the SL-TRC process.

The launching of the reconstructed website attracted participants from government, the UN, victims, civil society, and the media. Speakers called for the government to implement the recommendations, including the reparations program.

The new website of the SL-TRC will be host to comprehensive resources, including the report, audio and video of the TRC, a new page on the Sierra Leone Peace Museum, background information on the relationship of the TRC and Special Court for Sierra Leone, pictures of the TRC and an interactive Recommendations Matrix.