Women played a crucially important role in brokering peace in Solomon Islands but they still face significant barriers to inclusion in transitional justice initiatives. ICTJ has been working closely with women groups to facilitate their formal contribution to the Truth and Reconciliation Commission (TRC). 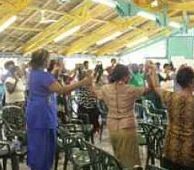 Women played a crucially important role in brokering peace in Solomon Islands but they still face significant barriers to inclusion in transitional justice initiatives. ICTJ has been working closely with women groups to facilitate their formal contribution to the Truth and Reconciliation Commission (TRC).

The conflict in Solomon Islands, known as the “tensions,” broke out in 1998 and continued until 2003, when, at the invitation of the Solomon Islands government, several neighboring countries deployed the Regional Assistance Mission to Solomon Islands (RAMSI). During the strife rooted in a complex mix of ethnic, economic and land issues, large numbers of people were displaced and beatings, arson, kidnapping, looting, torture, rape, murder and extrajudicial detention were committed.

Although women made a significant contribution to brokering peace informally, they were excluded from the negotiations resulting in the Townsville Peace Agreement in October 2000. Following the signing of this agreement, civil unrest and violence nevertheless persisted. With the state on the brink of collapse in 2003, the government welcomed RAMSI—a police-oriented multinational force comprising 15 countries of the region.

Since then, a range of transitional justice initiatives have been instituted, including “tension trials,” removal of police officers who were involved in the violence, and the establishment of the TRC.

Many of these initiatives, however, exclude women. This exclusion is not necessarily intentional, but there is a widespread feeling among Solomon Island’s women that transitional justice measures don’t take into account the significant and collective role many of them played during the tensions. Examples of such exclusion include the tension trials, in which several dozen suspects have been prosecuted for crimes committed between 1998 and 2003. Held with the assistance of RAMSI, these trials have dealt with a range of crimes, but there has not been any cases prosecuting sexual violence. Although it is thought that there were many sexual crimes against women committed during the tensions, no known efforts have been made to formally address them.

While attempts have been made to include women in the TRC’s work—the commission has two female commissioners, conducted a women’s public hearing and set a target that 50 percent of statements should come from women—still many feel there has been limited opportunity for them to contribute meaningfully to the process.

Working with women leaders, ICTJ hosted several workshops around the country—in Honiara, the capital, and in the provinces of Guadalcanal, Malaita, Western, and Choiseul—to address the importance of transitional justice and women’s contribution to the TRC. Participants of the regional workshops then came together for one national gathering to share their analysis and work on a combined submission to the TRC.

The workshops were filled with tears, laughter, reflection, and reminiscing; in many ways, they were like a reunion for the women. Many participants commented that since the tensions they had never come together to talk about what had happened and how they had survived. No victims’ groups or women’s groups dealing with the past exist in Solomon Islands.

At one point in the national workshop, women stopped the process and asked if some of them could share their stories. They said the TRC had “passed them by” and they wanted to talk now. One woman spoke of the loss of her son, her desperation still to know what happened and to have his remains returned. Other women spoke of displacement, harassment, torture, and loss of property.

And still, no one spoke of sexual violence. In Solomon Islands, the cultural taboo that silences experiences of sexual violence remains strong. As a result, many of the horrific incidents women have endured remain untold in any open setting. This highlights the enormous importance of implementing transitional justice initiatives sensitive to both culture and gender.

ICTJ is now supporting a group of women to pull together all the information and personal stories shared during the conferences to create a women’s submission to the TRC. The space created to facilitate this submission provided an important opportunity for women of Solomon Islands to mobilize, unite, share, and advocate for change. A change that will ensure their past experiences of violence will not be repeated.

Photo: An impromptu song from women attending a workshop in Honiara. Throughout July 2001, ICTJ's Solomon Islands program conducted workshops with women around the country in an effort to facilitate a space for them to create a women's submission to the TRC.