In South Africa, Education as Redress Has Seen Mixed Results

Can education help right the wrongs of the past, especially when the majority of the population was affected by those wrongs? Teboho Moja examines that question in the context of South Africa, where efforts to reform a discriminatory educational system and redress its consequences have been met with mixed results. 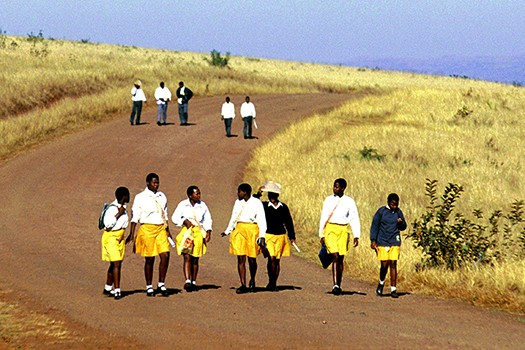 Can education help right the wrongs of the past, especially when the majority of the population was affected by those wrongs?

In South Africa redressing past injustice is complex because black South Africans, who make up over 80 percent of the population, suffered the most human rights violations under apartheid (1948-1994). Under the system of racial segregation, policies were implemented and acts passed that denied basic rights to non-whites. So-called Blacks, Coloureds (mixed race), and Indians were stripped of citizenship in their own country, prohibited from voting, and forced to live in separate “group areas,” among other injustices. This legalized oppression was justified by the government as a form of protection or preservation of the self-proclaimed superior white race.

Black South Africans in particular were subjected to a completely segregated education system, in which majority-black schools were under-resourced and of poor quality. Many who were active in the liberation struggle, which sought to end the apartheid regime and was partly based outside the country, missed out on educational opportunities altogether.

Education is a basic human right, and if it is denied or offered to people in a discriminatory or substandard form, their human rights are violated.

When apartheid ended, the new government prioritized redress for the historically marginalized populations through almost all sectors under the government’s control, including education. Education was seen as a potential form of redress almost from the beginning, forming part of the new South African Constitution of 1995, appearing in the Bill of Rights. It also predates the work of the Truth and Reconciliation Commission, which was set up by the Government of National Unity to help deal with what had happened under apartheid.

The post-apartheid government enacted targeted funding policies to support low-income communities, which mainly comprise blacks. It increased funding to historically black and under-funded schools, not only at the institutional level, but also at the individual level. For basic education, schools have been made free and compulsory until grade nine, and low-income families can receive exemptions from paying required school fees. At the level of higher education, black students now have a wide range of financial aid options in the form of grants, loans, and bursaries.

Increased funding was part of the recognition that exclusion from education had contributed to the poverty of black South Africans and their families in various ways. These policies were never referred to directly as “reparations,” but they do function as a form of redress for past injustice.

Today, more than 22 years after apartheid, while significant efforts have been made to create a more equitable education system, the results have been mixed. Altogether, the support provided is a start, but it is still inadequate. For example, while access rates to education have increased among black South Africans, students drop out in large numbers and the failure rate is high.

Historically black schools and schools in rural areas have remained majority black. Despite funding, they have remained second tier to historically white institutions, because the disparity in the quality of education was so wide to begin with that they have not been able to catch up.

In higher education, enrollment has nearly doubled, with the percentage of the black population enrolled increasing from 10% in 1996 to 16% in 2011. However, drop-out rates are high and most students take a long time to graduate. The performance of some black students is so low that they have been referred to by Mamphela Ramphele as “another generation betrayed.” This is because many are under-prepared for university and their performance in school is affected by persistent problems outside school, such as poverty and health issues, which stem from historical exclusion and injustice that have not yet been mitigated effectively through public policy.

At the same time, with these reforms there are perceived winners and losers. There are those, mainly from white, Coloured, and Indian groups, who see these policies as unjust. They believe that because reforms specifically target black South Africans, other racial groups in the country are now at a disadvantage. Indeed, there are those in South Africa who feel that because they did not participate in apartheid, they should not have to contribute to a system of privileges they themselves cannot directly benefit from.

Educational reform initiatives are needed for many generations to come. And there is no clear time frame for when the process will be “complete.” Is it possible to reach an “end”? If so, who, then, will get to decide when these reforms have “done their job?”

Clearly, although the doors of learning have been opened to all, not all have been able to enter and benefit. If reforms address only some of the needs of victims and not others that are equally necessary for them to succeed and actually benefit from increased opportunities, can the reforms truly be considered adequate?

The apartheid system created enormous inequities in state expenditures the fruits of which still pose major challenges today. Education policies were powerful tools for violating the basic human right to good and meaningful education of the majority of South Africans. It is in this sense that education reform must be recognized as a means to redress past injustices and a tool to transform the lives of victims across generations in South Africa.