A Struggle Against Invisibility: Gender Justice in the Middle East and North Africa 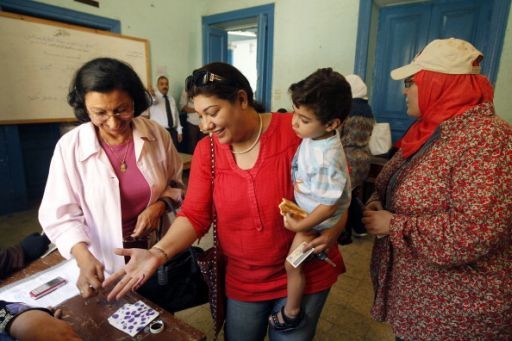 In the Middle East and North Africa, it is a challenge to ensure transitional justice measures do not further entrench the invisibility of gender-based abuses. As different countries consider the ways to confront the legacies of past abuses, ICTJ works with women’s groups across the region to build their capacity to engage in discussions around transitional justice and gender.

As we sat down with former political prisoners in Tunis, the women took turns describing their lives under dictatorship.

One by one, they recalled their arrests for political thought or religious observance. They described the brutal beatings they received under interrogation, and the sexual abuse at the hands of police and prison guards. They explained the oppression they faced even after their release - employment and educational blacklisting, and administrative requirements to check-in to the local police station multiple times each day, thus preventing them from pursuing what few work and educational opportunities may be available.

After decades of silence, these women are finally able to speak openly about these violations.

These stories aren’t unique to Tunisia. As in most other contexts in the world, women across the Middle East and North Africa (MENA) lack equal access to men’s social and political space, and economic resources.

While the revolutions sweeping the region have captured international attention, the unique suffering endured by women living under repressive regimes has gone largely unnoticed.

Women are often marginalized from the decision-making circles that shape the design of transitional justice measures, while those in these circles often do not understand the depth of gender-based violence that has taken place, or simply do not consider it important enough.

When women victims cannot adequately engage in transitional justice mechanisms, an important opportunity is lost: their experiences are not accounted for in the official narrative created by a truth commission, the lingering health consequences from torture, rape or sexual violence do not get addressed by reparations programs, and institutions like the police and the judiciary don’t receive necessary reform to ensure equal treatment under the law.

If victims of gender-based crimes are excluded, transition fails to bring about a new beginning, and justice is not served.

Transitional justice measures should serve to rectify, not replicate, patterns of discrimination against women. These mechanisms can challenge structural causes of gender inequality, by publicly acknowledging the factors that made such abuse possible.

Since January, 2011, ICTJ’s Gender Justice program has worked in MENA to build the capacity of women’s groups across the region to engage in discussions around transitional justice and gender.

Two countries where ICTJ is engaged- the Occupied Palestinian Territory (OPT) and Tunisia- demonstrate concrete efforts to integrate gender issues in efforts to deal with the legacy of the past and utilize transitional justice tools to provide truth, justice, and dignity to women.

Women in the Occupied Palestinian Territory (OPT) are victims of violence perpetrated by many sides – the Israeli military, Palestinian security forces, and those within their own communities. Despite this complexity, their calls for justice are straightforward - an end to the occupation, the cessation of unlawful killings and imprisonment of their loved ones, a halt to the violence between Palestinian groups, the ability to travel freely to work and school, and to be secure in their own homes.


Their fieldworkers, together with ICTJ, are gathering data that will be important in identifying the special needs of women and taking them into consideration when shaping broader transitional justice initiatives. WATC has also begun a one-year oral history project that aims to document stories of former female Palestinian prisoners, and ICTJ will assist with training on oral history methodology.

The Women's Centre for Legal Aid and Counseling (WCLAC) has also worked with ICTJ, jointly organizing a November 2011 workshop as part of the Center's regional gender project. The focus of the activity was on official and unofficial truth-seeking mechanisms. The two organizations will also work together to create strategies that can be used to bring gender issues into the public discourse on accountability. ICTJ has also undertaken consultations with WCLAC, Falastenyat, al-Haq, and al-Shams on how gender justice can be included in transitional justice programming.

Together with local partners like WATC and al-Shams, ICTJ has also raised these issues in the national media, providing interviews and doing call-in programs with radio outlets such as Radio Falasteen and Radio Nissaa, and submitting an article to WATC's monthly newsletter which is disseminated through al-Ayyam newspaper.

Earlier this month, an ICTJ delegation met with Tunisian Minister of Women and Family Affairs Sihem Badi, ministry employees, women activists, and former detainees to discuss ways to ensure that women and children are included in national TJ programming.

This meeting came as a follow-up to discussions in June in Tunis with ICTJ experts, and it was followed by a three day workshop entitled “Engendering Transitional Justice: Making Women’s Voices Heard.” ICTJ, the Justice and Rehabilitation Association, and the Arab Institute for Human Rights co-organized the event which aimed to strengthen the role of women in transitional justice processes, and reflected on means to promote and protect women’s rights. Participants from Tunisia, Libya, Egypt, Syria, and Yemen shared their experiences of human rights violations and their country’s approach in the field of gender justice.