Taylor’s Judgment Will Impact the Course of International Justice 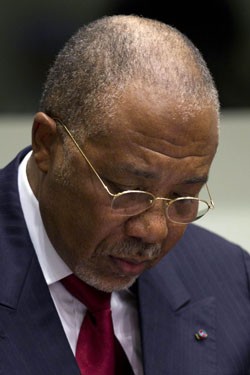 Charles Taylor is likely to spend the rest of his life in prison following the decision of the Special Court for Sierra Leone’s (SCSL) appeal judges to affirm his 50-year sentence for aiding and abetting crimes against humanity committed by rebels in Sierra Leone’s civil war. Although he avoided conviction for alleged crimes committed in his native Liberia, which he ruled from 1997 to 2003, the verdict will also be strongly felt in that country, and hopefully bring some measure of justice to his victims there as well.

The Special Court’s final judgment established that Taylor bears criminal responsibility for supporting the Revolutionary United Front (RUF) and other rebel groups in their campaign to instill terror in the civilian population of Sierra Leone. Although the court rejected the prosecution’s appeal to convict Taylor on the basis of his personal, individual responsibility for the campaign of murder, rape, sexual slavery and amputations, he was found guilty of “aiding and abetting” the commission of these horrendous crimes by providing RUF with essential material support, including weapons and supplies.

This judgment marks the fitting end of Taylor’s bizarre career as a brutal warlord, president, playboy, and, at one point, darling of the West. At the same time, it completes the work of the SCSL, the first so-called “hybrid” or mixed court – where international judges and staff worked alongside their Sierra Leonean colleagues - which is bound to leave a lasting legacy on the country, its judicial system, and its efforts to heal the scars of the civil war.

However, the significance of Taylor’s judgment rendered few days ago in The Hague goes far beyond Taylor himself, or even the Special Court for Sierra Leone. This decision will be an unavoidable legal precedent in any future deliberation of the role played by leaders and states in crimes committed by forces they support in other countries. The SCSL’s judgment in Taylor’s case has very significant legal consequences, distinguishing itself from other recent decisions by another international court and adding fuel to an already intense debate regarding the criminal responsibility of those who provide indirect support to perpetrators of mass atrocities.

To understand why this is so, we have to travel back to the 1990s, to a conflict thousands of miles from the coast of West Africa – the war in Bosnia and Herzegovina – and to another international court situated in the same Dutch town, only a few blocks from where the Taylor’s verdict was read out.

Perisic and his underlings had provided arms, equipment and other support to those who planned and committed these crimes against literally thousands and thousands of Bosnians.

Following the initial trial, Perisic was convicted and sentenced to 27 years imprisonment. This was hardly a surprise given the Tribunal’s jurisprudence and practice to date. There was no question that massive crimes had been committed in Bosnia by forces to which Perisic had supplied considerable material support, including large supplies of weapons and ammunition, without which these crimes may well not have happened or at least not on the same scale.

However, in the appeal decision that caused much surprise and generated great debate in international legal circles (as well as consternation and anger in Bosnia-Herzegovina), Perisic was acquitted of all charges and released. The ICTY appeal judges held that that in order for Perisic to have been legally responsible for crimes committed by the Bosnian Serb Army he actively supported, he must have intended that the material support he provided to these forces be used in the commission of those crimes. Or, in the words of the court, the prosecution failed to prove that Perisic’s provision of these weapons, support and materials was “specifically directed” toward the commission of crimes.

While legal scholars continue to argue about the Perisic case, on the practical level the decision meant that it would be extremely difficult to hold criminally responsible those who provide essential support, such as weapons and ammunition, to surrogate forces or allies that commit crimes. The “specific direction” standard is virtually impossible to satisfy because countries that provide aid to criminal groups will rarely give explicit directions about using the aid to further crimes, even though that is well understood by everyone involved.

The judicial decision heard around the world

The Perisic decision reverberated loudly in the corridors of courts and law schools around the world, but also of military establishments involved in supporting various forces in several ongoing or recent conflicts. Moreover, it also provided an opening for Charles Taylor and his camp. Bearing in mind the SCSL’s obligation to take into consideration the jurisprudence of the Yugoslav and Rwandan tribunals’ for guidance, a number of observers expected that Taylor would now be acquitted given the difficulty of meeting the “specific direction” standard as set out by the ICTY’s Perisic judgment.

However, the judges of the Special Court for Sierra Leone, after examining the precedents from international courts and customary international law did not follow the ICTY’s interpretation of “aiding and abetting” in Perisic and upheld Taylor’s conviction.

The opinion of Judges Shireen Avis Fisher and Renate Winter went a step further in underscoring this approach. They flatly rejected Taylor’s argument that without a standard of “specific direction” aiding and abetting liability would be overbroad and would criminalize the conduct of states assisting rebel movements in other countries, which might at the same time be supporting SCSL or other international courts. Judge Fisher was quite blunt: “Suggesting that the judges of this Court would be open to the argument that we should change the law or fashion our decisions in the interests of officials of States that provide support for this or any international criminal court is an affront to international criminal law and the judges who serve it.”

The importance of this judgment can’t be overstated. The SCSL’s judgment has not only finally provided a measure of justice to Charles Taylor’s many victims in Sierra Leone, it has provided a strong signal to those who want to commit horrific crimes though surrogates and puppets: they may not easily hide behind complicated legal constructs and are more certain to face the bar of justice. This a victory for justice everywhere and a warning to those who think that they can, like the Wizard of Oz, manipulate atrocities from afar and not face consequences.

This op-ed was previously published by Al Jazeera English.