Through a New Lens: A Child Sensitive Approach to Transitional Justice

As of 2010, over 1 billion children worldwide were living in territories affected by armed conflict, over one-quarter of them under the age of five. This means the “average” civilian victim—a person killed, injured, or forced to flee his or her home—is likely to be a child or youth. ICTJ’s pioneering report “Through a New Lens: A Child-Sensitive Approach to Transitional Justice” analyzes experiences of four countries—Liberia, Democratic Republic of Congo (DRC), Colombia and Nepal—and identifies some key lessons on children’s participation in transitional justice measures. 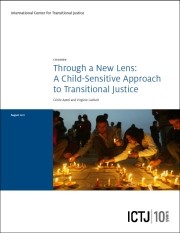 As of 2010, over 1 billion children worldwide were living in territories affected by armed conflict, over one-quarter of them under the age of five. This means the “average” civilian victim—a person killed, injured, or forced to flee his or her home—is likely to be a child or youth.

Yet despite the extent of human rights violations and crimes suffered by children, transitional justice mechanisms have frequently overlooked children’s interests and perspectives, and practitioners have only recently begun to acknowledge the significance of children’s participation in these measures.

Authored by Cécile Aptel and Virginie Ladisch, this valuable assessment in a largely unexplored area of transitional justice captures crucial aspects of different practices—from flawed attempts to include children in truth-seeking efforts in Liberia and their exposure to criminal cases in Colombia and the DRC, to the struggle for an adequate approach to the re-integration of child-soldiers in Nepal.

Examining truth-seeking, criminal justice, and institutional reform measures, the report also explores how children have been integrated into reparations programs. Of the four case studies, only Colombia has an administrative reparations program that specifically identifies children as primary victims based on violations they suffered due to the “illegal recruitment of minors.” In contrast in Nepal children are only eligible to receive benefits to the extent their parents were victimized.

“At a time where we see increased attention being given to the plight of children affected by massive human rights violations within the UN system (SC resolution 1998 passed in July 2011 as the latest example), it is essential that those of us working on post-conflict and post-authoritarian transitions integrate an analysis of children into our work,” said Virginie Ladisch, co-author of the report and the head of ICTJ’s Children and Transitional Justice Program. “Greater collaboration between the fields of transitional justice and child protection is essential for creating mechanisms that better address the full range of violations suffered by children, respond to their needs, create space for their engagement, and craft effective recommendations for moving forward.”

"We hope this report will encourage policymakers to devote more attention to the needs, rights, and demands of children and youth in post-conflict situations or following legacies of abuses, such as those in the Middle East and North Africa," said Cécile Aptel.

“Through a New Lens” strongly emphasizes the importance of engaging children for the sake of preventing recurring abuses. Often in their formative years when violations occur, children affected by crimes may lose points of reference of what is acceptable behavior on an individual and societal level. Thus, the potential for cross-generational conflict and future violence make the inclusion of children a fundamental concern of any transitional justice endeavor, the report states.

“Children and youth comprise a powerful sector of society that holds the potential to either support and strengthen the establishment of rule of law and durable peace, or be a potential spoiler. Transitional justice aims to catalyze social change away from impunity, toward a culture of democracy and respect for human rights. Key agents of that are children and youth; not only are they less likely to be set in their ways, they also have the most to gain by helping solidify a durable peace,” said Ladisch.

Listen to the Podcast