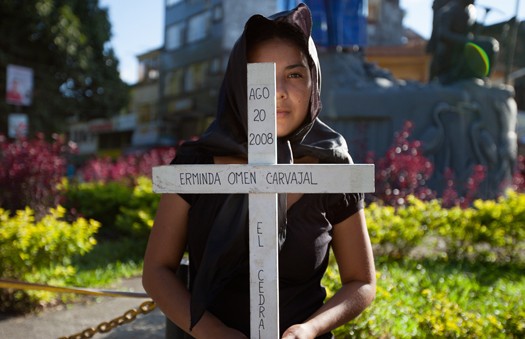 Whether emerging from revolution or repression, armed-conflict or dictatorship, societies on the path to re-establishing justice and the rule of law must ensure that women are not only at the table, but play an active part of determining the way forward. It is in this critical time that truth-seeking, institutional reform, reparations programs, and criminal prosecutions can all be ways to acknowledge and end impunity for the spectrum of violations and abuse against women and girls.

To mark International Women’s Day, we invite you to read about four countries that will be on the top of our gender justice priorities in the coming year, each with its own history, context, and complex sets of challenges. We’re working alongside partners on the ground to ensure that transitional justice initiatives reveal gendered patterns of abuse, enhance access to justice, and build momentum for meaningful and concrete reform for women’s rights.

In these countries and elsewhere, ICTJ salutes efforts to secure truth, justice, and the rule of law that are making a difference in the lives of women and girls.

When post-election violence erupted across Kenya in 2007, the Kenyan police force was deeply implicated. The subsequent loss of public confidence prompted the National Police Service Commission to embark on a nationwide vetting process of its officers to determine suitability for service and remove those who do not meet ethical, suitability, and competence standards.

This politically fraught initiative is particularly significant for women who tried to report their experiences of post-election violence at police stations: instead of being offered protection and a chance to report their abuse, they faced indifference, hostility, ridicule, and sometime sexual assaults at the hands of police officers.

ICTJ will work with the Commission and women’s groups in the coming year to ensure that the vetting process promotes accountability for police misconduct against women and others implicated in sexual and gender based violence. Including the voices of women in the vetting process can help ensure that the Commission takes police misconduct against women seriously.

It is time for the security forces of Kenya to challenge the culture of impunity enjoyed by the police force, and re-assure Kenyan women that the police serve to protect, not to harm.

Throughout Colombia’s armed conflict, generation after generation of women and girls have endured widespread violence. Crimes of rape, sexual assault, and other forms of abuse have been conspicuously neglected by authorities, and almost virtually ignored by the criminal justice system: for example, despite a 2008 referral to the national prosecutor of 183 cases of sexual violence, these women—most of whom who have suffered severe physical and psychological trauma—have yet to receive any guarantee that they will see justice.

Outrage of Colombian society over these delays, as well as scrutiny from the international community (including the International Criminal Court) is helping to bring about change, and recent events suggest that there is more momentum than ever to enact justice for sexual violence. For example, a draft bill may soon be passed that would amend Colombia’s Criminal Code to recognize certain forms of conflict-related sexual violence, such as forced nudity, abortion and pregnancy as specific criminal offenses. Additionally, Colombia’s Attorney General is now investigating more than 1,100 cases of sexual violence related to the armed conflict.

As peace talks in Havana continue and hopes of ending the armed conflict remain high, ICTJ is providing expertise and technical assistance to the authorities in support of efforts to ensure accountability for sexual violence and gender-based crimes.

### Tunisia: Facing the Truth about the Experiences of Women

After the collapse of the Ben Ali dictatorship, Tunisia set out to establish the truth about past human rights abuses. Thanks to a comprehensive transitional justice law, the formation of a truth commission is already underway.

Importantly, the law incorporates gender-based criteria in the commissioner selection process, requiring that each gender be represented by at least one third of its members. This is a strong signal that true gender parity in this commission is possible.

In this critical moment for Tunisia, ICTJ works with women’s rights and victims groups to ensure that women are included in the truth commission process. They can provide know-how on how best to approach women on sensitive issues, monitor a commission’s work on gender, and provide support that helps ensure women’s experiences are fully reflected in the commission’s findings.

### Nepal: Providing Women with the Support they Need

During Nepal’s armed conflict, women were victims of torture, abuse and sexual violence. In 2006, a peace agreement called for certain actions to be taken to address the legacy of abuse from the war.

To date, the government has created a humanitarian relief program - the Interim Relief Program (IRP) - that provides financial relief and in-kind assistance to the families of the victims who were forcibly disappeared or killed and to those who were made disabled or injured during the conflict. Victims of torture and sexual violence are in urgent need of psychosocial support that the IRP could provide; however, these victims are not eligible to receive these essential benefits, despite continuing to suffer both mental and physical injuries.

Over the coming year there are several opportunities to advance the discussion on reparations for victims. It is critical that reparations respond to gender-specific impacts of abuses, which include, but go well beyond rape and other forms of sexual violence.

ICTJ is working alongside victims and civil society groups to advocate for the inclusion of victims who have been denied essential support and services, including victims of sexual violence. Our forthcoming study on Nepal’s looks closely at the gendered impact of the conflict, particularly the implications for reparations programs. Through this report and more, we will continue to work with others to press for reparations with smarter, more informed measures for addressing the conflict-related trauma undergone by women in Nepal.