Three years after Tunisia's revolution, victims in the south of the country are still facing severe economic and social marginalization. In recent workshops with ICTJ, they explain why collective reparations and development are both central parts of their vision of justice. 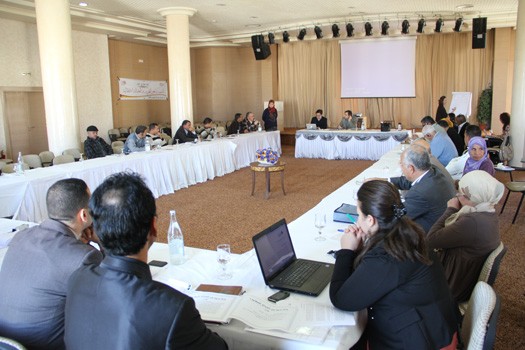 Three years ago, in an act of economic desperation and political defiance, a young street vendor in the south of Tunisia lit himself on fire. Little did he know that his decision would spark massive protests across the country, and his name, Mohamed Bouazizi, would go down in history as the start of the end of ex-President Zein el-Abidine Ben Ali’s 23-year rule.

The economic roots of the revolution have been part of the discussions about how the country should face the crimes of the past. Victims have asked that economic grievances be included in the spectrum of human rights violations that could come under inquiry, which include abuse related to physical integrity (such as killings, torture, and violence against protesters).

The transitional justice law sets out a comprehensive approach to addressing past human rights abuses. It creates a Truth and Dignity Commission and addresses reparations, accountability, institutional reform, vetting, and national reconciliation. It also creates a Fund for the Dignity and Rehabilitation of Victims of Tyranny” (article 41) and special chambers with trained judges to deal with cases of human rights violations.

As a major step for the county, the new law could play an important part to address the economic hardship faced in the region that Bouazizi called home. The southern interior region of Tunisia maintains a 30% unemployment rate, and endures aggressive economic marginalization from the rest of the country.

Such grievances are not bound by Ben Ali’s rule, but span decades prior to his rise to power. Hence, victims—particularly in the southern regions of Tunisia—have asked: how can transitional justice measures, such as reparations programs, help Tunisia address generations of economic and social subordination?

This was the topic of two workshops, hosted by ICTJ in the south of Tunisia, aimed at fostering the dialogue, cooperation, and coordination between diverse players in Tunisia’s transitional context.

The events—co-facilitated by the Tunisian victims’ organization, Justice and Rehabilitation—brought together an array of groups in Tunis, Tozeur and Tataouine, to assess progress made on the most urgent reparations, tackle key challenges facing future reparations policies and engage in constructive conversations about the different forms of reparations that may be relevant to the country.

Traditionally, reparations are given as compensation for individual harm suffered, and have addressed individual human rights violations like torture detention, killing, enforced disappearances, and sexual violence.

However, recent efforts have attempted to better redress collective harm, where a particular community or part of the population is targeted by repression or suffer marginalization.

It was this pattern of which is of the kind that happened to communities of the south in Tunisia, where the ICTJ workshops took place.

Several experiences from other parts of the world on community reparations offer important lessons and examples for those now embarking on collective reparations programs. Carranza, along with other ICTJ experts, including Cristian Correa, Shehzeen Saied, and Rim El Gantri presented the programs and approaches of these countries.

The experience of Peru, which has started to implement collective reparations in provinces that were most affected by the violence with Sendero Luminoso, involved victim representatives participating directly in the registration and policymaking process and led to a cash transfer program aiming at alleviation of poor communities. In Morocco, reparations were provided to 11 regions after a truth commission identified the areas as the most marginalized under the reign of the former king. Additionally, the province of Aceh, Indonesia initiated a community-based reparations program that directed development funding to repair infrastructure lost in the war.

In the aftermath of conflict or repression, there is an intuitive link between reparation programs and development, particularly where poverty is endemic, and economic hardships are at the center of community grievances.

A multitude of examples in the southern Tunisian context demonstrate the connection between development and reparations. Particularly, victims identified the political discrimination they faced in access to basic health services. They pointed to the need for hospitals and treatment centers that would provide specialized health care to victims of torture, and to children who were traumatized by the detention of their parents. Shadi, a 23-year old man that was injured during the protests, stated that “there are no specialized hospitals that were able to provide care for those injured by bullets,” adding that he had to undergo another operation to mend the medical error done in the first operation.

Others indicated the need for infrastructure, which can also serve as an act of memorialization. For example, some participants pointed out that building a school could service the community, but also memorialize victims. Koulthoum, one of the former detainees under Ben Ali’s dictatorship, pointed at the intangible harm that detention has brought on her and her child. “Memorialization will help us walk proudly in our communities and defy the social stigma that accompanied us as prisoners,” she said.

To achieve this type of integration in the southern region of Tunisia, participants from such the Office of Development for the South and the Tunisian General Trade Union (UGTT) in the south pointed to the need to engage economic institutions working on social and economic marginalization. Yet still reparations are a state responsibility and formal recognition of the loss, marginalization, and grievance must come from the state; in the workshops, ICTJ stressed that this recognition is critical to effective reparations programs.

With its partners, ICTJ is exploring the integration of reparations measures within development programs in the country. “We want to see transitional justice, but we also want to see it implemented in a way that is feasible, and effective,” said Carranza.

Read more about ICTJ's Reparative Justice Program in this interview with Ruben Carranza and Cristian Correa.