Turning Tears into Happiness: The Prospects of Local Reparations Initiatives in Nepal 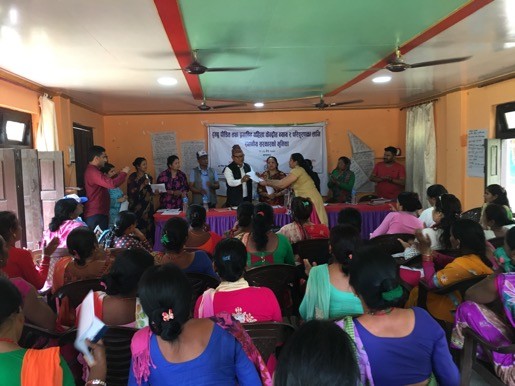 Earlier this month, ICTJ staff readied a small meeting room on the edge of Shuklaphanta National Park in Nepal’s far-western region of Kanchanpur for the last of three workshops organized by ICTJ, together with our implementing partner The Story Kitchen. We waited for the last of the 36 women conflict victims who were assembling there to arrive. They had traveled great distances by crowded bus and on foot for the chance to meet with local government officials to seek help and reparations for the harms they’d suffered during the war.

I could not tell whether any of the women felt hopeful: the room was close and hot, the faces serious. But I felt a touch of anticipation in the air brought on by the prospect of finally getting to speak, and perhaps being heard. One survivor described her faltering hope. “When I hear about the conflict, my heart is heavy,” she said. “The rivers [during the war] were full of blood. If you hear the story, it is hard to be brave. The central government did not do anything. Now that we have a local government hopefully they will do something.”

Those words underscore a great opportunity to act. Nepal’s new local government structure – comprised of districts, municipalities, sub-municipalities, and wards formed within the new federal system under the 2015 Constitution – offers the possibility of some individualized redress for victims at the community level.

As Bhupendra Khanal, Program Manager for ICTJ’s Nepal Program, explained, “under the new federal structure, local government officials have not only executive powers, but also legislative and judicial functions, and have jurisdiction to implement a wide range of tasks related to service delivery and development. In those new roles and powers, there is great potential for local governments to design and implement local level initiatives that can satisfy victims’ rights to justice, acknowledgment, reparations, and reform.”

Sushila Chand Singh, deputy mayor of Bheemdatt in Kanchanpur, and a champion of women’s rights issues, spoke of an initiative already underway in the nineteen wards within Bheemdatt Municipality. There, each ward has created an ‘area development committee’ (ADC) of between seven to fifteen people tasked with making local level government more functional, inclusive and representative. The ADCs are intended to be diverse, and as such, include women and conflict victims. These committees are collecting data using ‘female social mobilizers’ who will provide the municipality with the exact number of disadvantaged, poor, and vulnerable in the district informing more responsive programs and policies, including for conflict victims, said Singh, and offered heartfelt assurances, saying, “You have submitted this demand paper. I will make sure that we will keep your demands in mind when we develop policies or guidelines. We will think about the problems and address those demands. In my five years tenure, I will turn your tears into happiness.”

But efforts like Singh’s will take time to bear fruit and directly impact the women who we spoke with. What could make the difference? Women, victims’ groups, and civil society must have a say in policy development to ensure it addresses victims’ diverse needs and challenges. Kelen Meregali, an ICTJ expert in Nepal, who also participated in the workshops, emphasized the importance of outreach when I spoke to her during the workshops. “We need to get the word out now as local government functions, powers, and the scope of local jurisdiction are being elucidated, both in Kathmandu and at the local level. Civil society, victims’ groups, and human rights defenders need to be engaged to help ensure that input is flowing both ways, from the top down and the bottom up. Otherwise, conflict victims will not be heard.”

Even with local initiatives, big decisions will still need to come from Kathmandu. Any truly comprehensive reparations policy will require signoff there and the commitment of financial and human resources. It also means maximizing input from national agencies such as the Ministry of Peace and Reconciliation and the National Human Rights Commission, which have already collected significant information from victims and are aware of the violations suffered by many victims (although not all) and the resulting harms.

In addition, the two commissions tasked with bringing the truth about the violations of human rights to the public, recommending reparations, and reconciling society—the Truth and Reconciliation Commission and the Commission of Investigation on Enforced Disappeared Persons—need to be made effective and adequately resourced. And the National Integrity Policy—a proposed law that would impose more stringent governmental controls over non-governmental organizations operating there should be reconsidered. Additional restrictions on civil society are likely to narrow the space that remains for meaningful dialogue and eviscerate much-needed support which the government and victims’ groups themselves are already requesting, such as in the area of reparations.

The federalist structure in Nepal offers a window of opportunity that must be seized upon. As local governments make budgetary and resource allocation decision for this year and next, it is essential for local grassroots actors including victims and victims’ groups to be consulted about what is needed and where. Listening to the women and pledging to help is just the first step.