For children born of war, what future?

In this op-ed, ICTJ's Virginie Ladisch and Lindsay McClain Opiyo argue that children born of war remain largely ignored in responses to sexual violence in conflict. 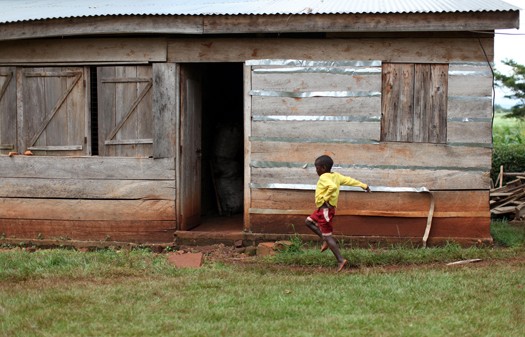 In recent weeks, more than 700 women and children have been rescued from Boko Haram by the Nigerian Army. Reports suggest that at least 214 of them are visibly pregnant. While agencies like the United Nations Population Fund (UNFPA) provide much-needed emergency medical and psychosocial support, little effective analysis exists on the long-term needs and challenges of these children born of war and their mothers.

Unfortunately, the experience of women and children abducted by Boko Haram is not unique to the emergent situation in northern Nigeria. Nearly 2,000 miles away from Boko Haram’s stronghold in the Sambisa Forest in northern Nigeria, the Lord’s Resistance Army (LRA) traverses the jungles of central Africa with hundreds of captive men, women and children. Known for using similar tactics of abduction and forced marriage as Boko Haram, the rebel group has survived for more than two decades despite numerous political and military attempts to expel it.

While the prevalence of sexual violence in conflict has received increasingly greater recognition in public, policy and academic circles around the world, the majority of the resultant reports and responses focus on short-term needs and largely ignore children born of sexual violence.

Last month, the International Center for Transitional Justice (ICTJ) conducted an assessment in northern Uganda to understand the needs and challenges of incorporating children born of war into reparations and development policies. Our findings, which will be produced in a report later this year, reveal long-term needs and challenges of children born of war that (re)integration programs and policies have largely ignored and overlooked. When the initial rush of attention and humanitarian aid wanes, it is important to keep in mind the longer term consequences of conflict on the children born of war and plan interventions accordingly.

Prioritizing the unique needs of children

There is a need for special programs for children born of war. Often times, programs focus exclusively on their mothers, as the immediate survivors of conflict sexual violence. While mothers undoubtedly have a need for such support, the needs of their children may differ and it cannot be assumed that programs designed for the women will trickle down to the children. In societies where one’s identity derives from paternal lineage, children with unknown or untraceable fathers can face considerable hardship living with maternal relatives. Increasingly, peer-support groups have been a popular strategy in northern Uganda to provide psychosocial support to female survivors of conflict sexual violence. No such groups exist for the children, in part because of a lack of prioritization by non-governmental organizations and donors, and because of the challenges and sensitivities involved in identifying and mobilizing them.

Further, the programs for women survivors who bore children need additional support to recognize their status as mothers. For example, in northern Uganda, where persons returning from the rebels were awarded reinsertion packages of basic household items by the government, there were no additional allowances for those with children born in captivity. This trend continues today, with many governmental and non-governmental programs recognizing formerly-abducted persons as a special category for assistance, but not children born of war.

Reintegration at the community level

As much as the children deserve special programs for the violations they suffered, their communities do too. In conflicts like those in northern Nigeria and Uganda, war has affected nearly everyone. Trauma and scarcity of resources, for instance, can contribute to the exacerbated stigmatization and rejection of children born of war. Formerly-abducted women and their children may only initially be welcomed into homes and communities due to the appeal of the resources from reintegration programs that they return with. Tensions and conflicts often emerge over time, however, especially as the resources dry up and children reach school-going age and require additional support for fees and school requirements. Other times, as experienced by some mothers in northern Uganda, their relatives initially welcomed the women but refused to accept their children, forcing the women to leave home and rent in urban centers where they experience relative anonymity.

Any programs or policies that support these children or their mothers must consider the social circumstances in which they live. Failing to view other relatives and community members as key stakeholders in any support they receive is likely to undermine any efforts. More than a one-off sensitization campaign, it is necessary to take the time to understand how the community perceives the returning mothers and their children born of war as well as the specific obstacles the children are likely to face (such as land access, stigma, and resentment) and together with the community devise strategies to overcome those obstacles. In northern Uganda many young mothers felt that receiving support to become productive and self-sufficient was the key to gaining respect in their community and overcoming stigma, rather than just psychosocial support.

The differentiated impacts of gender

Anticipating the nuances and gender differences among children born of war is a critical part of devising appropriate and responsive programs and policies. Even amongst children born of war under the same circumstances or within the same group of fathers, individual needs and circumstances may greatly differ. For instance, female and male children will face different challenges in societies in which females’ families receive dowry when their daughter marries while males are expected to inherit land and other resources when they come of age. In northern Uganda, some families and clans have rejected male children born of war to a higher extent than females because they do not want to allocate land to them on which to settle when they come of age.

Ethnicity can also affect levels of acceptance and acknowledgement, as can the identity of the father. In Uganda, children born of rape by government forces are largely invisible, due in part to the fact that the same government under which these atrocities were committed is still in power. Further, children whose parents are from different regions or ethnicities reportedly face greater stigma than children born of war to parents of the same ethnicity. This is especially severe if the father is believed to be from a group for which the conflict is blamed. Any interventions or responses to meet their needs must recognize these nuances and respond accordingly.

Focusing on the future

The ICTJ’s assessment underscored the reality that the needs of children born of war shift over time and require long-term visioning and planning. The needs of children born of war are not the same when they are infants as when they are young adults. Their identity and needs constantly evolve over time as conflicts and circumstances shift over time. The interventions of UNFPA and other organizations providing support in northern Nigeria must evolve accordingly.

Whereas the pressing need today may be counseling for the mother and medical support for a safe delivery of the child, in the future, the need may be access to education, land, livelihoods, justice and redress. Not every organization may have a mandate to provide support this far into a post-conflict period, but the needs of children born of war shall remain.

Organizations involved in programming and policymaking must maintain a panoramic view of the reparative justice needs of children born of war while the lens is still fixed on the young women rescued from Boko Haram. Within this view, taking the time to extend any work involving children must also incorporate the receiving communities to ensure that the cycle of violence is not repeated through the next generation. It is important to recognize and plan for children born of war so that they can outgrow the negative consequences of the circumstances of their birth, and have the hope of a brighter future where they are treated with dignity and their rights are respected.

This article originally appeared on OpenDemocracy.

A shorter version of this article was published on Insight on Conflict on June 17, 2015.

PHOTO: Lawrence, a boy staying at Omoana House, a child rehabilitation center in Jinja, Uganda, plays outside on Saturday, May 21, 2012. (Bread for the World/Flickr).