Making Justice a Reality Where It Counts

In this op-ed, ICTJ Vice President Paul Seils argues that the front line of justice must always be national courts and justice systems. "Citizens must see social institutions at work in their home countries, as it is there that courts can repudiate wrongdoing and reaffirm the most fundamental elements of the contract that binds a society together. It is there that having the dignity of a citizen can have its fullest meaning," writes Seils on International Justice Day. 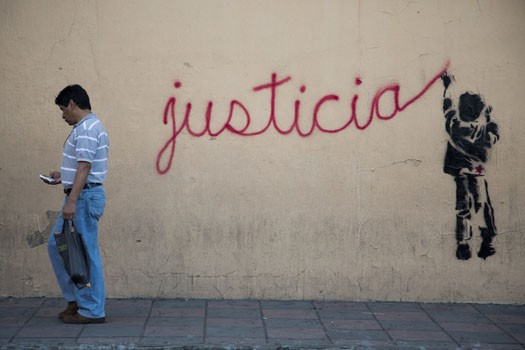 Some years ago I sat in a courtroom in the central highlands of Guatemala, a member of a legal team representing victims of a massacre committed by the Guatemalan Army and paramilitaries in March 1982. Over 170 women and children were killed in the attack. Very few men perished because most had been killed in a massacre one month before.

I sat beside one of the survivors, who had been a child at the time. His father was killed in the first massacre, his mother and sisters in the second. Several paramilitaries had decided to abduct some of the surviving children, including him and his two-year-old brother, and take them to their homes. Unfortunately along the way, the younger boy could not keep up. His head was smashed against a rock in front of his brother's eyes. His entire family had been wiped out in one month, in the most brutal ways. After three former paramilitaries on trial were convicted and the judges delivered their sentence, he turned to me and said, "They are peasants, just like me, but I suppose the law is the law." It was said with deep compassion.

It does not give back the crushed bodies of toddlers or the truncated hope of life. The struggle goes on for survivors, who are deprived of love and family breadwinners. And yet there is a profound wisdom in the simple phrase, "The law is the law."

What is the law's value? Some would say it lies in deterrence. This is a comforting thought but questionable in many ways. Fritz Bauer, the prosecutor who played a crucial role in the Frankfurt Auschwitz trials of 1963-1965, offered a more thoughtful view. When asked what was the point of prosecuting Auschwitz officials he said it was vital that everyone knew that it meant something to be protected by the German constitution, that the dignity of being valued by that law meant something real. I have come to think that this is close to what motivated my friend in Guatemala: However minimal, the conviction was a vindication of the dignity of his lost loved ones, of their violated rights.

We know that many countries are not in shape, or seem unwilling to get into shape, to carry out complex trials in fragile situations. International institutions like the ICC provide one answer for states under its jurisdiction, but the ICC is a court of last resort and will deal with only a few cases in the countries where it operates. It is an important backstop, but the front line of justice must always be national courts and justice systems.

Victims, survivors and society as a whole must feel that their national systems and constitutions are worth something -- that the rights they espouse are real, not illusory. The challenge remains in making justice a reality for more victims in these fragile circumstances.

Experience shows focusing assistance on specialized national capacities is the best way forward. They must be able to do five things. First, map out the most serious violations and develop credible criteria for identifying those most responsible for violations; second, develop effective outreach and communication with survivors and society to establish a relationship of transparency and good faith about the choices to be made and progress on investigations; third, carry out honest and effective investigations capable of proving the responsibility of those behind systems of atrocities, which requires specialized training because the kinds of investigations necessary are alien to most of the world´s prosecutors and police officers; fourth, ensure that witnesses and officials have appropriate protection before, during, and after proceedings; and finally, ensure that judges are trained to understand the legal issues and handle the pressures that can arise in the febrile atmosphere of atrocity trials.

We know that helping to build the specialized capacity of investigators, prosecutors, judges and defense teams to handle serious crimes is possible and cost effective. Some progress has been made over the years, with interesting, if not perfect, results in Bosnia, Colombia, Ethiopia and Guatemala, to name a few. The skills gained can be transferred to help national justice institutions develop in due course.

By insisting on specialized national capacities, international actors can shine a brighter light on the progress being made (or not made) to pursue accountability and can better identify and answer the help that is needed. Trusting that a general improvement in justice institutions will lead to effective investigations -- "a rising tide lifts all boats" -- is well-meaning but misguided. It more often translates into an excuse for inaction. Specialized capacities, built on targeted training and provision of resources, is the best way to make national systems deliver on justice for massive violations.

Citizens must see social institutions at work in their home countries, as it is there that courts can repudiate wrongdoing and reaffirm the most fundamental elements of the contract that binds a society together. It is there that having the dignity of a citizen can have its fullest meaning. From the peasant to the president, all citizens should know and understand what it means to say, "The law is the law."

This article was originally published on The Huffington Post.

PHOTO: A man walks by a graffiti that read in Spanish "Justice" in downtown Guatemala City, on Noember 9, 2013. (Moises Castillo/AP Photo)