Ahead of a UN Periodic Review, Uganda Must Do More to Combat Impunity and Deliver Justice to Victims

On January 27, 2022, the UN Human Rights Council's Universal Periodic Review (UPR) Working Group will examine Uganda’s human rights record. The UPR process presents an important opportunity to spotlight the human rights situation in the country, and recommend actions that the government of Uganda should take to fulfill its human rights obligations. 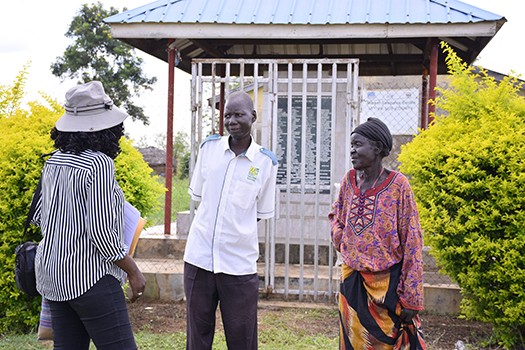 On January 27, 2022, the UN Human Rights Council's Universal Periodic Review (UPR) Working Group will examine Uganda’s human rights record. The UPR process presents an important opportunity to spotlight the human rights situation in the country, and recommend actions that the government of Uganda should take to fulfill its human rights obligations.

The UPR entails a state peer-to-peer review of the overall human rights situation in each state party to the United Nations. Once the UPR Working Group has considered all the information at its disposal, it offers a set of recommendations on addressing any breaches of international human rights law, which the state can then accept or reject.

ICTJ and members of the civil society transitional justice cluster in Uganda jointly submitted a report to the Human Rights Council describing human rights concerns in the country and assessing the Ugandan government’s implementation of previous UPR recommendations, including those related to transitional justice. The report identifies four areas requiring urgent action: (1) ensuring victims of human rights violations receive an effective remedy, (2) guaranteeing the rights of children born of war to nationality and birth registration, (3) dealing with past and present enforced disappearances, and (4) addressing conflict-related sexual and gender-based violence. It concludes with recommendations and actionable steps directed at the government to tackle these issues, fulfill its international obligations, and improve the human rights situation in the country.

The UPR takes place against the backdrop of rising cases of torture, arbitrary detention, and enforced disappearance; increased restrictions on civic space; and a failure to redress past atrocities. An absence of accountability has moreover created a culture of impunity in the country that undermines the rule of law and human rights.

In Uganda’s last UPR in 2016, the government accepted over 200 recommendations, including those specifically related to delivering redress to victims of mass atrocities, combating impunity, and dealing with sexual and gender-based violence. Notably, the Ugandan government agreed to adopt the National Transitional Justice Policy and enact the necessary legislation to help fulfill victims' rights to truth, justice, and reparations.

The government subsequently approved the National Transitional Justice Policy in June 2019, which was a welcomed development. That said, however, the government has done little to implement it in the past three years. This long delay deprives victims of access to an adequate, prompt, and effective remedy and reparations, in violation of their rights under various international human rights instruments to which Uganda is a party. Furthermore, there is yet to be any justice for the victims of the attack on the palace of the Obusinga Bwa Rwenzururu in the Kasese district in November 2016 that killed over 150 people, including at least 15 children and 46 royal guards.

In our joint report to the Human Rights Council, we call on the Ugandan government to immediately enact the National Transitional Justice Policy and establish measures to deliver truth, justice, and reparation to victims. We further urge the government to conduct an independent and transparent investigation into the November 2016 attack and enforced disappearances in the Kasese district and prosecute the perpetrators without delay and according to international due process standards.

In the 2016 UPR, the Human Rights Council called on the Ugandan government to accede to The International Convention for the Protection of All Persons from Enforced Disappearance. Enforced disappearance has been a main feature of Uganda's political instability and civil strife. It is estimated that over 80,000 persons were abducted during the armed conflicts in Northern Uganda and the Rwenzori region. While large numbers of these abductees have returned, 10,000 to 15,000 persons abducted by the Lord's Resistance Army, many of whom were children at the time, are still missing years after the end of the conflict.

Political activists were also unlawfully detained, forcibly disappeared, and extrajudicially killed during the 2021 general elections. State agents abducted and tortured dozens of opposition supporters. Our report calls on the government to establish an independent commission of inquiry to investigate all cases of enforced disappearance and provide redress to the victims. It further urges the government to create an inclusive database of those still missing and locate and recover the remains of the missing.

The report highlights the plight of victims of conflict-related sexual and gender-based violence and children born of wartime rape who face stigma, discrimination, and significant hurdles in accessing civil registration documents. The government should investigate and prosecute all perpetrators of conflict-related sexual and gender-based violence and provide reparations to victims, including comprehensive medical care and psychosocial support. It should also put in place simplified, trauma-sensitive administrative procedures that reduce stigma and allow flexibility in civil registration requirements to ensure that children born of war are not denied registration.

The UPR serves as a rare occasion for the Ugandan government to reflect on its human rights record and its obligations under international law as assessed by peers and members of the Human Rights Council. The council will no doubt hand down a new set of recommendations. This time, the Ugandan government must take concrete step to implement these recommendations if it is to finally address deeply entrenched human rights concerns and fulfill its international commitments.

PHOTO: An ICTJ staff member (left) meets with caretakers of the Atiak Massacre memorial site (pictured in the background) in Northern Uganda. The massacre occurred on April 20, 1995, when soldiers of the Lord’s Resistance Army rounded up and held captive some 300 civilians in the town of Atiak. The soldiers subsequently executed all the captives, save the young boys and girls whom they forcibly conscripted. (Patrick Suuna/ICTJ)