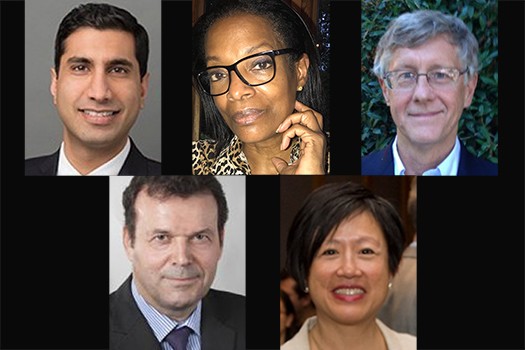 “We’re really excited to expand our board with five new members who will bring diverse expertise and insight to our work,” said Chairperson Robert Cusumano. “They have stellar track records as leaders, and we are confident that their wisdom and know-how will help us advance our mission.”

Mr. Barnett currently teaches career strategy at Rice University’s Jones School of Business and in its Masters of Global Affairs program. Previously, Mr. Barnett taught business and career strategy at the Yale School of Management. Earlier in his career, Mr. Barnett was a senior partner at McKinsey and Company, where he served clients across diverse industries and led the firm’s strategy consulting practice. Mr. Barnett established and headed the systems analysis office within the U.S. State Department’s Politico-Military Affairs Bureau, responsible for assessing various arms control and alliance issues.

Dr. Keller is Vice Dean and a professor at the University of Geneva Faculty of Law. He is a former fellow at the Carr Center for Human Rights Policy at Harvard University’s Kennedy School of Government. From 2002 to 2004, Dr. Keller actively participated in the negotiations between Israelis and Palestinians that led to the Geneva Accord. During that time, the Swiss Foreign Minister appointed him to serve as a special representative for the Middle East peace process.

Ms. Lin was the Sloan Foundation’s chief financial and compliance officer from 2010 to 2021, chairing the foundation’s Operations Management Committee and overseeing relations with its Board of Trustees. Previously, Ms. Lin served as Executive Vice President of the Nathan Cummings Foundation, Senior Treasury Analyst at Beatrice Company, and Regional Director of Operations for the Mid-Atlantic Region at the Trust for Public Land. Ms. Lin has served on the boards of organizations, such as the Women’s Housing and Economic Development Corporation and Philanthropy in New York.

“We are very fortunate to have such knowledgeable and well-respected individuals as members of our board” said Executive Director Fernando Travesí. “Their strong and strategically minded leadership will be invaluable to the organization, especially as we navigate the impacts of the pandemic. Our whole team is thrilled work with them as we embark on our new five-year strategic plan starting in April.”