‘A Drop of Water on a Hot Stone:’ Justice for Victims in the Central African Republic 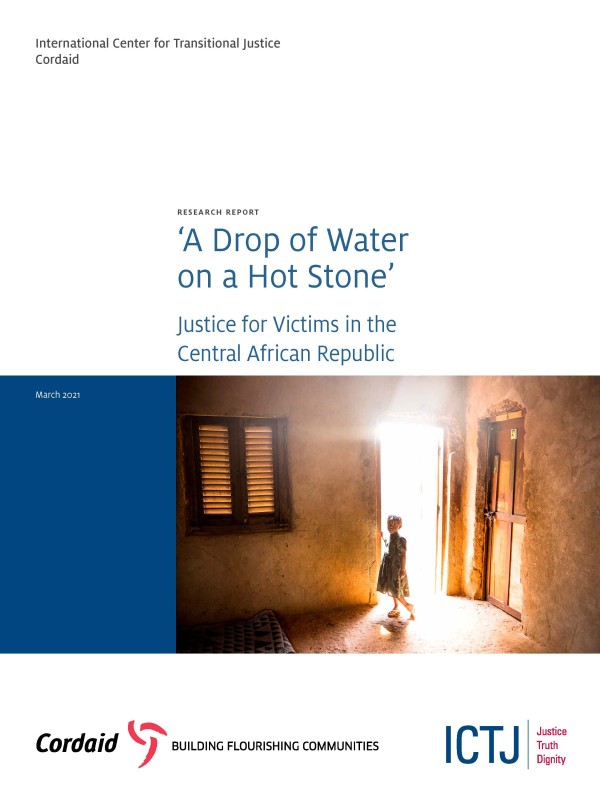 The Central African Republic (CAR) has endured six decades of violent conflict, which has fractured the country and weakened the state’s ability to provide not only justice but also basic services. Victims of human rights violations, especially those outside the capital Bangui, often belong to profoundly marginalized communities. Their victimhood is thus aggravated by daily struggles of exclusion, inequality, and the absence of alternatives. This research report examines the notion of justice and its feasibility from the perspective of a victim-centered approach in a context of profound fragility and extreme poverty.

The first section of the report gives an overview of the contextual challenges to providing justice to victims, including the ongoing violent conflict and widespread human rights violations, polarization, lack of inclusion, social norms, and the exclusion of young people from decision-making processes. These obstacles, which deepen the justice gap, are generally not taken into consideration when designing justice measures and initiatives.

The second section describes existing justice initiatives and those currently being established in CAR, including judicial and non-judicial mechanisms and those administered by national and international bodies. However, high operating costs, dysfunction, corruption, and centralization of services in the capital severely tend to limit the ability of these initiatives to deliver justice to victims.

The third section discusses victims’ demands and aspirations for justice based on their experiences and priorities. It sheds light on the need for meaningful participation of victims, members of marginalized communities, and civil society representatives, among others, in justice initiatives in order to ensure their legitimacy and facilitate their implementation. Garnering such broad participation requires engaging, unifying, and impactful communication and outreach strategies. The report concludes with a set of conclusions and recommendations that acknowledge the challenges in providing justice to victims in a fragile context like CAR and highlight innovative transitional justice strategies in which victims are the cornerstone.