“Now Is a Time to Lead:” Advancing Transitional Justice Initiatives through Local Governments in Nepal 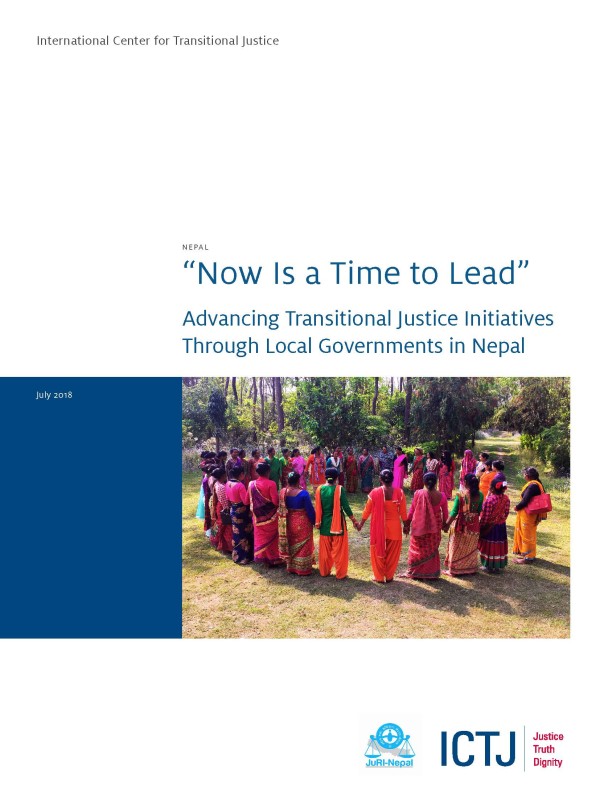 Recently, Nepal implemented some significant long-awaited changes to its structure of government that present new opportunities for addressing the justice needs of conflict victims. On September 20, 2015, a new Constitution came into effect, replacing the interim Constitution promulgated in 2007, soon after the conflict ended. That constitution introduced a new federal structure of government that, among other things, vests local governments with 22 powers and areas of responsibility over which they have broad authority. Many of these powers can be exercised to establish policies and programs at the local level for fulfilling victims’ rights to truth, justice, reparation, and acknowledgment for the human rights abuses victims suffered during the war.

Although local initiatives are not a complete substitute for a coherent national policy, these powers offer great potential for implementing measures to address promptly and directly a full spectrum of victims’ reparative needs, from the symbolic to the material. They encompass food, housing, employment and job creation, medical care, education, legal services, help obtaining official documentation, memorialization initiatives and other forms of public recognition, awareness-raising activities, and measures aimed at preventing the recurrence of human rights abuses. Many of these measures would fulfill fundamental rights guaranteed under the Constitution to all Nepal’s citizens, and additional rights secured there for vulnerable populations (such as the elderly, disabled, single women, those marginalized or indigent, and children). If designed to be reparative in nature, they could also fulfill victims’ rights to an effective remedy, including the right to “adequate, effective and prompt reparation,” as articulated by the UN General Assembly in its Basic Principles and Guidelines on the Right to Remedy and Reparation for Victims of Gross Violations of Human Rights Law and Serious Violations of International Humanitarian Law (UN Basic Guidelines).

This report aims to help local governments, victims’ groups, and other stakeholders to understand the scope and potential inherent in these powers and to identify what local governments and others can do to design and implement initiatives that support victims of conflict and that fulfill this potential. To this end, this report looks closely at the provisions of the 2015 Constitution and the Local Government Operationalization Act 2074 BS (2017 AD). It also considers the essential role local governments can play in crafting and coordinating responses alongside national-level institutions that are advancing transitional justice processes, such as the Truth and Reconciliation Commission (TRC), the Commission on Investigation of Enforced Disappearance of Persons (CIEDP), and the National Human Rights Commission (NHRC). Additional consideration is given to the provisions of the Enforced Disappearances Enquiry, Truth and Reconciliation Commission Act (the TRC Act), 2071 (2014), and the requirements established therein for local government cooperation and engagement with ongoing transitional justice mechanisms.

With offices within or near victim communities, local governments in Nepal are well situated to tailor initiatives to address victims’ particular needs. Coming as they do from out of the communities they serve, most local officials, including many who are victims themselves, are familiar with realities on the ground and nuances in the economy and in community practices that may affect whether a policy will benefit or might unintentionally harm victims, or could even exacerbate tensions within families or between neighbors. Many local officials speak and read the local languages and dialects victims speak and read. Also, many are privy to crucial differences among survivors’ experiences of war, as well as their current life situations. With access to information about existing services and knowledge of what is required to get things done locally, local governments offer real potential advantages for understanding and effectively responding to victims’ needs and for building the kinds of relationships needed to help bridge divides not only between and among victim populations, but also between victims and nonvictim communities in Nepal.

With five-year terms in office (and eligibility for an additional term), local officials at each of the different levels of local government (e.g., municipal, village, and ward) should be able to plan and undertake not only short-term or targeted projects that respond to victims’ urgent needs but also long-term, subsistence-based projects that can provide victims with the benefits they need to create a more stable life for years to come.

Many of these initiatives can begin while national policymakers in Kathmandu continue working on a comprehensive approach to transitional justice. National and local dimensions of transitional justice are not mutually exclusive; there is no reason local efforts cannot be designed in a way that meet victims’ needs for redress, in particular for the most vulnerable populations, while still meeting other government obligations, including those at the central and provincial levels. In fact, local governments working effectively now might relieve some of the pressures on the central government, by meeting victims most acute needs and collecting data and testing policies that could be implemented later at the national level.

To do so, all levels of government across the federal structure will need to coordinate, communicate, and abide by the essential elements of good governance, including preventing corruption. Victim initiatives must be designed in such a way as to “do no harm” and to ensure that victims are treated fairly and with respect and dignity. As Nepal has learned from its experience implementing the Interim Relief Program (IRP)—which was hampered by significant shortfalls in design and implementation (including insufficient funding, a lack of coordination among key stakeholders, the exclusion of some categories of victims and the unequal treatment of others, and the politicization of application processes and eligibility determinations)—it is essential to consult with victims, to be sensitive to their needs and vulnerabilities, to acknowledge the violations they experienced, and to monitor and evaluate implementation to prevent discrimination.

In all decisions and procedures, the safety, well-being, and dignity of victims must be considered and given priority. The victims will be paying attention. As one victim forcefully made the point, “We raise our voices. We do not give up. And we will not sit by in silence…I say to the government—listen to our voices, consider our demands.

The challenges local governments will inevitably face are innumerable. At each stage of the process, local governments will confront significant hurdles as they exercise their powers to design, plan, and eventually implement programs benefiting their constituents, including Nepal’s many conflict victims. This report highlights some of these major challenges based on feedback obtained during consultations conducted in preparation of this report in some of the districts where conflict victims live. Immediate steps should be taken to monitor, address, and mitigate the following challenges:

These challenges are likely to be made somewhat harder and confusing by parallel operations going on at the TRC and the CIEDP, both of which are tasked with fulfilling victims’ rights to truth, justice, reparations, and acknowledgment. At the time of the drafting of this report, the tenures of the TRC and the CIEDP had been extended until February 2019; the commissions had not concluded their operations or issued recommendations on reparations, which could form the basis for a future comprehensive reparations policy; and major amendments to the TRC Act were under consideration, which could provide further clarity about the form reparations will take and what categories of victims will be eligible to participate and how.

In fact, there is already much underway that is positive. ICTJ and JuRI-Nepal separately conducted a series of meetings and interviews to find out about those initiatives already in process to address victims’ reparative needs in Kathmandu and in conflict-affected districts, namely Kavre, Bardiya, Banke, Kanchanpur, Kailali, and Chitwan. Those interviews provide some useful insights into the approaches available to local governments for developing (and perhaps piloting) future reparations policies that address victims’ needs. Among the approaches worth noting are the following:

This report concludes by offering detailed recommendations for local governments that are considering measures of reparation for human rights victims and other transitional justice initiatives, including for promoting reconciliation and projects of memory. Recommendations are also offered to the national government and civil society for facilitating these measures and ensuring monitoring and consistency during implementation. These recommendations include the following:

For the national government