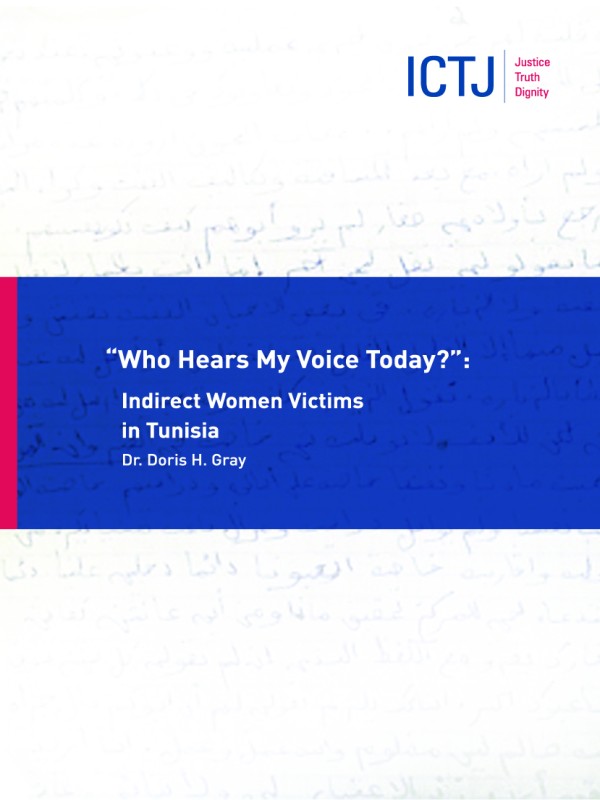 This report focuses on “indirect victims” of human rights violations in Tunisia, namely, the wives, sisters, and children of political prisoners in Tunisia, who suffered discrimination, social exclusion, police violence, and harassment as a result of their relatives’ incarceration during the dictatorship, as well as mothers of the martyrs. Though they may not have suffered incarceration, physical torture, or even death like their relatives, these victims were persecuted and discriminated against and experienced severe economic hardship and isolation after a family member was detained for political and/or religious activities. They were dismissed from work, expelled from school, and/or subjected to random police searches and harassment. Some women fled the country to escape a painful life of isolation and harassment, in many cases with their children, carrying nothing but the clothes on their back.

Until now, there has been no substantive, systematic study of these victims, who suffered economic blacklisting, denial of due process, as well as other social and economic rights violations. The aim of this report is to shed light on this population of victims that is often overlooked or silenced in the process of transitional justice and post-uprising nation building.

Accurate data on the number of people who were detained for political reasons during Tunisia’s dictatorship period (1955–2011), including women activists, has been nearly impossible to collect. What is known is that the immediate and extended family members of these prisoners, who also suffered human rights abuses, continue to live with the consequences of those violations today. Their fate raises important questions in the human rights discourse because the violations they suffered do not fit neatly within typical human rights narratives, which tend to prioritize civil and political violations and violations of physical integrity. The findings in this report are based on extensive interviews conducted with more than 250 women family members of detainees and mothers of martyrs from nine regions and Tunis in July, August, and December 2017.

For many victims, the most pervasive and sustained consequences of the human rights violations they suffered have been the break-down of the family and lost confidence in the judicial and political system, coupled with the sowing of mistrust among family members and communities who feel betrayed. According to the Universal Declaration of Human Rights, families are the building blocks of a society; thus, the destruction of the family unit has serious consequences for individuals and society. In most cases, the forced separation of family members—wives from husbands, mothers and fathers from sons and daughters—has led to permanent estrangement or domestic strife. For example, when husbands were incarcerated, the pressure on their wives was sometimes so great that they were compelled to give their children away to be raised by members of their extended family. Further, women who had not previously worked outside the home or who lost their job as a result of being related to an “enemy of the state” had to generate an income and/or depend heavily on the financial and social support of relatives.

Women relatives of political prisoners were also harassed by Tunisia’s system of pointage (which required the relatives of prisoners to report daily to different police stations) and having to travel long distances to deliver couffins (traditional baskets) containing food, clothing, blankets, and/or medicine to their incarcerated relatives, who were often relocated to far-away prisons to increase the burden on families. Many women experienced sexual harassment and violence, sometimes at the hands of police officers during their pointage-mandated check-ins, other times by neighbors or others in the community who took advantage of their heightened vulnerability in the absence of male family members. This type of harassment and violence further enhanced these victims’ sense of shame, estrangement, and self-loathing, especially considering the highly conservative religious communities most lived in.

Detainees, once released from prison, were often incapable of resuming their normal family relationships with their loved ones, returning from torture chambers to their homes. An inability to engage in healthy marital relations led, in some cases, to violent interactions with their family members. Though many wives, sisters, and mothers feel a need to stand by their persecuted men, interviews revealed that some children resent their father’s political choices, which they blame for destroying their hope for a decent life. In some cases, women were even forced by their family to divorce their husband while he was in prison and marry a man from the police or security forces, in order to lift the weight of alienation and harassment from the extended family. It is essential that this array of consequences be examined in a systematic way, in order to begin to understand the full impact of the state’s willful destruction of families on indirect victims.

Many Tunisians have spent a majority of their life living under repressive rule, and from interviews, it seems clear that some of the effects of such a life have not only persisted for the women but in some cases have transferred to their families. The deeply entrenched and justifiable lack of trust in state institutions expressed in interviews with victims (both direct and indirect) can only be repaired with efforts on the part of the state to highlight the human rights violations experienced, address the needs of victims and ensure non-repetition.

After the 2011 revolution, Tunisia embarked on a process to address past human rights violations under the comprehensive framework established by the Organic Law on Establishing and Organizing Transitional Justice. The process has faced numerous challenges, including a difficult political terrain, and victims have expressed frustration with the lack of results. The Truth and Dignity Commission was plagued by internal divisions, while the Specialized Chambers has faced slow implementation. The other elements included in the law – reparations, memorialization and institutional reform – are still forthcoming.

This report offers documentation and analysis that aims to enhance the current understanding of the experiences of this population of victims. It underscores the importance of actively involving victims in the process of societal transformation. The transitional justice process in Tunisia must recognize the experiences of indirect victims and seek to address the consequences of the violations they faced. This report highlights that this goes beyond ensuring their participation in the process, which is important, to contributing to their ability to exercise agency in their lives and make up for the opportunities they were denied by the state.