Accountability in Policing COVID-19: Lessons from the Field 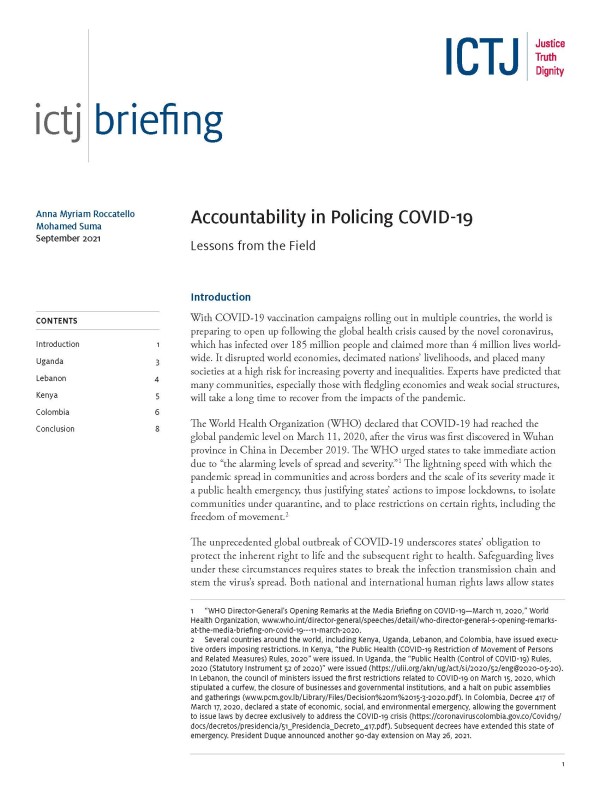 As countries around the world roll out their COVID-19 vaccination programs and gradually reopen their economies and borders, the coronavirus continues to ravage vulnerable communities. Moreover, these same communities have borne the brunt of the economic disruption caused by the pandemic, which decimated livelihoods, increased poverty, and exacerbated inequalities in many countries.

Early in the pandemic, countries rushed to shut their borders and impose emergency measures, such as curfews, travel restrictions, and community lockdowns. States deployed security forces to enforce these measures, some of which resulted in widespread human rights violations, including torture, killings, and intimidation of persons perceived as failing to comply with their orders. Colombia, Kenya, Lebanon, and Uganda—all countries where ICTJ works—are among those whose security agencies weaponized their powers under these emergency measures and often used brutal means to keep people off the streets. While constitutional police forces committed the bulk of these abuses, a growing number of paramilitaries, citizen vigilantes, and other nonstate forces have also committed human rights violations while enforcing the emergency measures.

However, the COVID-19 pandemic underscores states' obligation to protect the inherent right to life and the subsequent right to health. Moreover, national and international human rights laws allow states to temporarily suspend certain rights and invoke special powers that would be considered an infringement of civil liberties in normal situations. Thus, the suspension of those rights is justified by the need to protect the collective good.

This paper analyzes the emerging trends of draconian regular policing and vigilante policing during the pandemic in Colombia, Kenya, Lebanon, and Uganda. The paper also describes how armed nonstate groups have come to exercise control in communities where there is no government presence to enforce emergency lockdown and other measures, with little regard for the principles of proportionality and non-discrimination. In all contexts, since the outbreak of the COVID-19, regular police and paramilitary forces have increased their powers, which they have abused extensively. As a result, some policing practices have become deadlier than the virus itself and have exposed the profound frailties of democratic governance.