Can Building Bridges Break the Cycles of Corruption and Political Violence in Kenya? 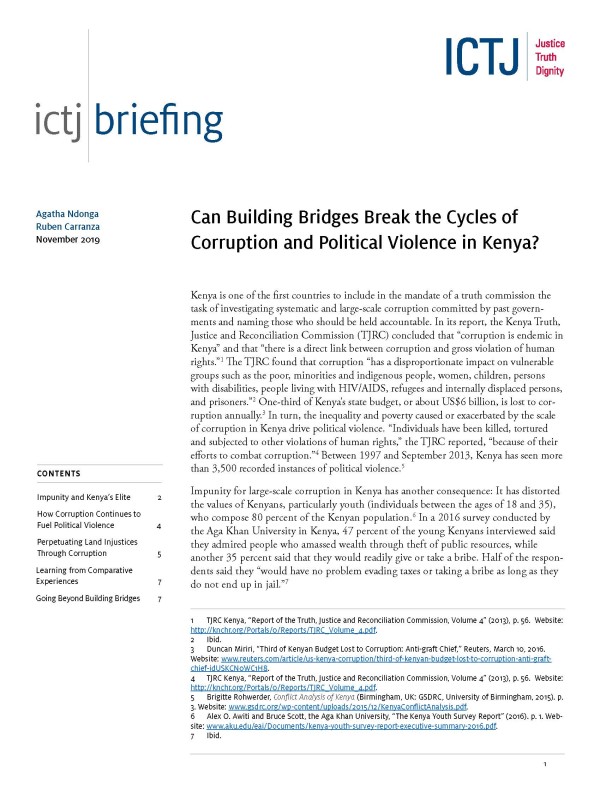 Kenya is one of the first countries to include in the mandate of a truth commission the task of investigating systematic and large-scale corruption committed by past governments and naming those who should be held accountable. In its report, the Kenya Truth, Justice and Reconciliation Commission (TJRC) concluded that “corruption is endemic in Kenya” and that “there is a direct link between corruption and gross violation of human rights.” The TJRC found that corruption “has a disproportionate impact on vulnerable groups such as the poor, minorities and indigenous people, women, children, persons with disabilities, people living with HIV/AIDS, refugees and internally displaced persons, and prisoners.” One-third of Kenya’s state budget, or about US$6 billion, is lost to corruption annually. In turn, the inequality and poverty caused or exacerbated by the scale of corruption in Kenya drive political violence. “Individuals have been killed, tortured and subjected to other violations of human rights,” the TJRC reported, “because of their efforts to combat corruption.” Between 1997 and September 2013, Kenya has seen more than 3,500 recorded instances of political violence.

Impunity for large-scale corruption in Kenya has another consequence: It has distorted the values of Kenyans, particularly youth (individuals between the ages of 18 and 35), who compose 80 percent of the Kenyan population. In a 2016 survey conducted by the Aga Khan University in Kenya, 47 percent of the young Kenyans interviewed said they admired people who amassed wealth through theft of public resources, while another 35 percent said that they would readily give or take a bribe. Half of the respondents said they “would have no problem evading taxes or taking a bribe as long as they do not end up in jail.”

In 2018, President Uhuru Kenyatta and former prime minister and political opposition leader (now a political ally) Raila Odinga jointly launched an initiative called the Building Bridges to a New Kenyan Nation Initiative, now commonly referred to as “the handshake.” According to the document drawn up by the two parties, the initiative is meant to draw “a path to dignity, prosperity and security.” The document highlighted nine issues that the initiative is to tackle to create a united nation for present and future Kenyans. One of those issues is corruption, which was described as “an existential threat to Kenya.”

But while the government has taken steps to address corruption, including through the Building Bridges Initiative, these measures have been largely rhetorical and have done little to change the perception that corruption remains entrenched in Kenyan society. This paper therefore considers the extent of impunity for corruption in Kenya, how corruption fuels and facilitates political violence and land injustices, and how Kenya can learn from other countries’ experiences to go beyond building bridges among the elite and meaningfully protect the rights of its citizens.