Dead at the Root: Systemic Dysfunction and the Failure of Reform in Lebanon 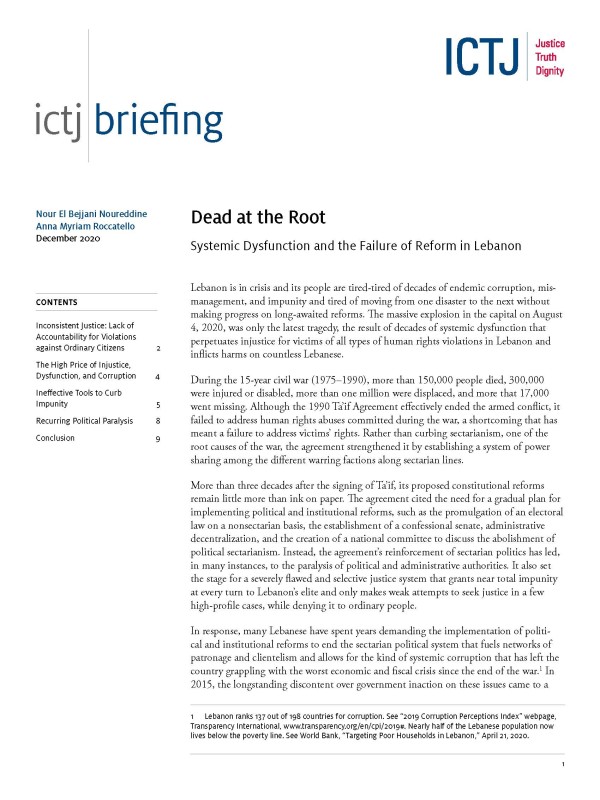 Lebanon is in crisis and its people are tired of decades of endemic corruption, mismanagement, and impunity and of moving from one disaster to the next without making any progress on long-awaited reforms. They have been left with a local currency that is rapidly declining in value, thus eroding their savings and livelihoods. The massive explosion in the capital on August 4, 2020, was only the latest tragedy, the result of decades of systemic dysfunction that perpetuates injustice for victims of all types of human rights violations in Lebanon and inflicts enduring harms on Lebanese society.

During the 15-year civil war (1975–1990), more than 150,000 people died, 300,000 were injured or disabled, more than one million were displaced, and more than 17,000 went missing. Although the 1990 Ta’if Agreement effectively ended the armed conflict, it failed to address the human rights abuses committed during the war, a shortcoming that has also meant a failure to uphold victims’ rights. Rather than curbing sectarianism, one of the root causes of the war, the agreement strengthened it by establishing a system of power sharing among the different warring factions along sectarian lines.

Today, nearly half of Lebanon’s population is living below the poverty line, with limited services and high economic insecurity. Since the war, the elite class in Lebanon has consistently blamed the country’s dysfunction on others, including neighboring countries and the international community, which have interfered in different ways in the politics and finances of the country. That narrative is no longer sufficient. It is clear that the problems Lebanon is facing today have deep-rooted causes that were never addressed at the end of the war. People will continue to find themselves victims of a corrupt and unjust system until that system is uprooted entirely, and a new, more just, equal, inclusive, and nonsectarian structure is set up in its place.