Justice for Syrian Victims Beyond Trials: The Need for New, Innovative Uses for Documentation of Human Rights Violations in Syria 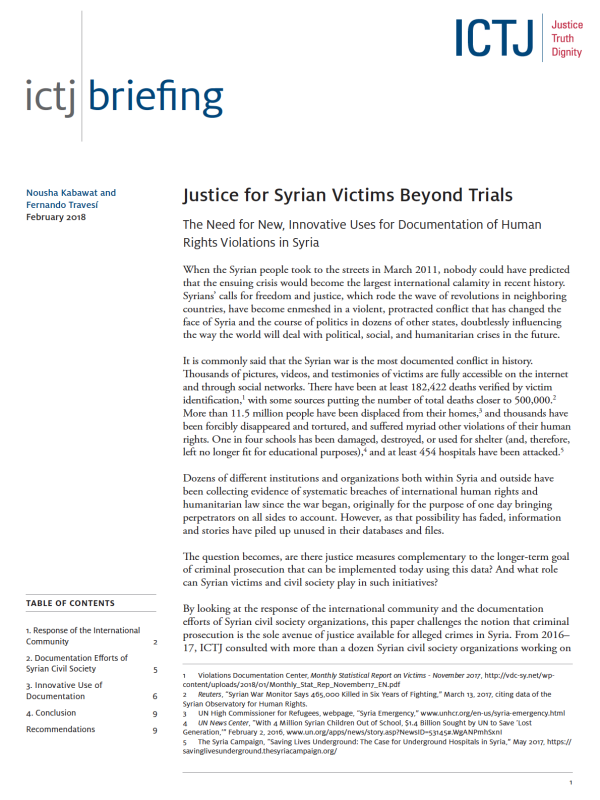 When the Syrian people took to the streets in March 2011, nobody could have predicted that the ensuing crisis would become the largest international calamity in recent history. Syrians’ calls for freedom and justice, which rode the wave of revolutions in neighboring countries, have become enmeshed in a violent, protracted conflict that has changed the face of Syria and the course of politics in dozens of other states, doubtlessly influencing the way the world will deal with political, social, and humanitarian crises in the future.

It is commonly said that the Syrian war is the most documented conflict in history. Thousands of pictures, videos, and testimonies of victims are fully accessible on the internet and through social networks. There have been at least 182,422 deaths verified by victim identification,1 with some sources putting the number of total deaths closer to 500,000.2 More than 11.5 million people have been displaced from their homes, and thousands have been forcibly disappeared and tortured, and suffered myriad other violations of their human rights. One in four schools has been damaged, destroyed, or used for shelter (and, therefore, left no longer fit for educational purposes),4 and at least 454 hospitals have been attacked. Dozens of different institutions and organizations both within Syria and outside have been collecting evidence of systematic breaches of international human rights and humanitarian law since the war began, originally for the purpose of one day bringing perpetrators on all sides to account. However, as that possibility has faded, information and stories have piled up unused in their databases and files. The question becomes, are there justice measures complementary to the longer-term goal of criminal prosecution that can be implemented today using this data? And what role can Syrian victims and civil society play in such initiatives? By looking at the response of the international community and the documentation efforts of Syrian civil society organizations, this paper challenges the notion that criminal prosecution is the sole avenue of justice available for alleged crimes in Syria. From 2016–17, ICTJ consulted with more than a dozen Syrian civil society organizations working on issues related to transitional justice, with a specific focus on documentation, in order to understand their processes, use of documentation, and impact, as well as the challenges they face. It is clear that documentation could be used for important other avenues of justice, such as acknowledgement, fulfilling victims’ right to truth, and informing and preparing future transitional justice processes. This paper makes several recommendations for what can be done with documentation to support victims in the face of continuing injustices in Syria.