"We Cannot Forget": Truth and Memory in Post-Conflict Nepal 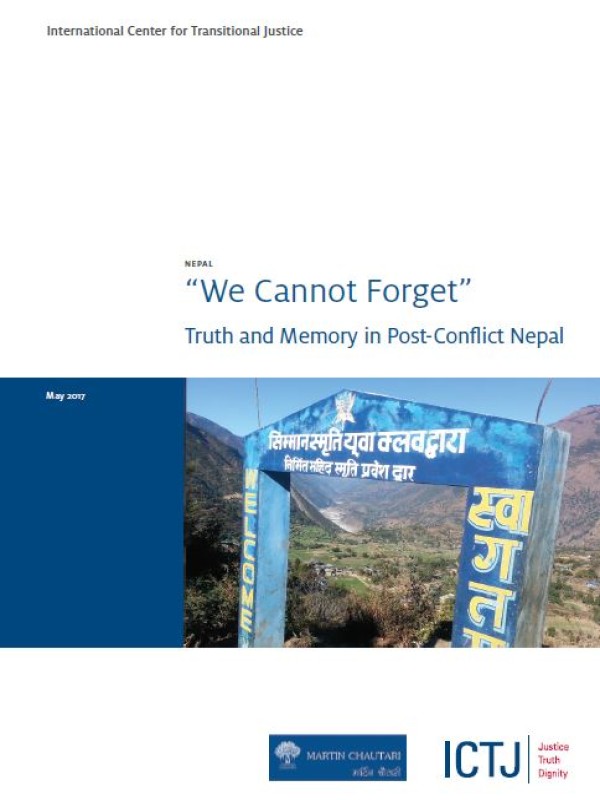 In the context of an ongoing truth-seeking process in Nepal, the manner in which victims conceptualize truth and relate it to justice is instructive. This is particularly true as the country's two truth commissions, the Truth and Reconciliation Commission (TRC) and the Commission of Investigation on Enforced Disappeared Persons (CIEDP), advance in their efforts to provide victims with truth about past events. Victims'conceptualizations about the value and meaning of truth illustrate the importance of why "it is not enough to know what has been done, but also to know what it means to various actors in society. In trying to understand different perceptions of truth in various districts of Nepal, it is clear that previous and present historical and political contexts have informed the way in which the past is understood by various actors, at all levels.

Interviews of victims of human rights violations and other serious crimes committed during the armed conflict conducted from 2014-2015 for this study have revealed important information about the views of this fundamental constituency regarding truth-seeking efforts in Nepal. Victims clearly value the identification of perpetrators and explanations for the causes that led to violations, the circumstances and facts of violations, and the fate and whereabouts of the forcibly disappeared. For some, especially victims of sexual violence, truth is more complicated, and effort will be needed to help victims to overcome societal stigma and use existing opportunities to break down harmful misconceptions about their experiences.

Historically and politically situated truth-seeking practices reveal the importance that victims place on not only situating their individual experiences within the broader context of conflict, but also the significance of acknowledgement of the harms they and their loved ones endured. Making public the individual and collective stories of sacrifice and contribution means victims' gaining respect, a sense of dignity, and self-worth. Further, there are clear demands for prosecution and reparative measures to hold perpetrators to account and get to the root of victims' current suffering.

Obstacles to the full realization of meaningful truth-seeking efforts remain. On the national level, policy makers and other government officials seem to have limited understanding of victims' needs and experiences, and in many cases they are willing to forego further search for the truth in deals to resolve other political disputes. At more regional and local levels, while government actors are much better informed about victims' experiences and expectations, they also tend to rely on patronage networks. This has led to the perception among victims that many of those receiving benefits are not "real" victims but simply have close connections to local elites. Lack of outreach and poor decentralization efforts may also impede inclusive truth seeking if concerted efforts are not made to include those in even the most far-reaching districts.

For those affected by the conflict who were historically marginalized, memorialization as a form of reparation and truth telling is an important option that respondents tend to believe would help garner respect and legitimacy for victims, their relatives, and communities, locally and nationally. While the effects on social reconciliation and healing are yet to be fully explored, there are indications that the creation of meaningful, victim-centered memorials designed in consultation with victims and communities could be an important way to both acknowledge victims' diverse experiences and supplement the truth-seeking, criminal justice, and reparative measures victims seek.

It must be noted that because a limited number of districts formed the core of this research, there are limitations to the extent to which these findings may apply to the larger population. Further, while some perpetrators were interviewed, the perspectives of perpetrators still need be explored in more depth by future research. Despite these limitations, these findings represent a valuable starting point for engaging in reflections about Nepal's long transition to sustainable peace. More thinking can be done about how to evaluate truth seeking and memorialization in Nepal at both the local and national levels.

Based on the findings in this report, we make the following recommendations in support of victims' right to truth in Nepal:

To the TRC and the CIEDP