From Optimism to Disillusionment: Examining Civil Society Perceptions of Police Vetting in Kenya 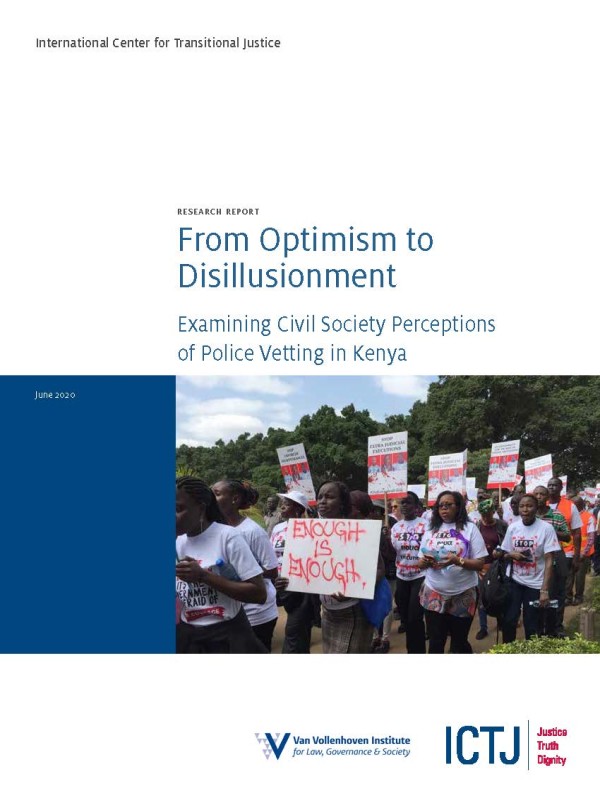 Download the full report From Optimism to Disillusionment here.

In 2013, a police vetting process began in Kenya in response to the 2007-2008 post-election violence. Some reports suggested that the police had failed to stop that violence, others that the police had actively contributed to it. For decades, the police force had been notorious for its corruption, extrajudicial killings, and torture. This was the context in which a comprehensive police reform program was set up, one that included a vetting component and was led by the newly established National Police Service Commission (NPSC). The NPSC was mandated to screen every officer inside the Kenyan police.

Civil society organizations (CSOs) initially expressed a great deal of optimism about the vetting plans. Indeed, political will for the process seemed to be present. The vetting of the judiciary, which had started shortly before the police vetting and was considered to be quite successful, also strengthened CSOs’ beliefs that serious and genuine police vetting was possible. Unfortunately, their optimism quickly turned to disillusionment and their confidence in the process crumbled. Six years after the commencement of the police vetting process, CSO representatives commonly agreed that it had failed.

From Optimism to Disillusionment: Examining Civil Society Perceptions of Police Vetting in Kenya, the report from ICTJ and the Van Vollenhoven Institute at the Leiden Law School, offers an account of the police vetting process in Kenya. Drawing on interviews with CSO representatives, former NPSC commissioners, staff, and panelists, and victims of police violence, the report focuses specifically on the causes underlying civil society’s disillusionment.

One of these causes was the outcome of the vetting. Out of the estimated 80,000 officers in service, the commission vetted only 5,993, of whom 445 were found unsuitable and dismissed. While the program did subject the very top police commanders to vetting, and the early hearings occurred in public, which was groundbreaking, in the end less than 7.5 percent of all police officers were subjected to vetting.

But the more important cause may have been the process. The commission was certainly not simply engaged in a whitewashing exercise, and was at times, at least initially, quite committed to the vetting process. But the NPSC was also seen by civil society as a commission that, crucially, did not always take the CSOs seriously, culminating in a lack of responsiveness, sensitivity, and transparency on the commission’s part. While the commission’s approach seems to have also resulted at least partially from external pressures, it seriously hurt the overall assessment of the vetting exercise by the CSOs.

The report is accompanied by two additional publications. The briefing paper Hearings and Decision Making During Transitional Vetting Processes: Insights from Kenya focuses on micro-level decision making within the commission, illustrating how a combination of factors—discretion, decision makers’ experience, and social tensions—can affect the outcomes, perceptions, and legitimacy of a vetting process.

The policy brief Reflections and Recommendations for Transitional Vetting draws on the research conducted in Kenya to highlight the importance of strategy, coherence, information gathering, communication, expertise, and political and material support in vetting processes more generally.