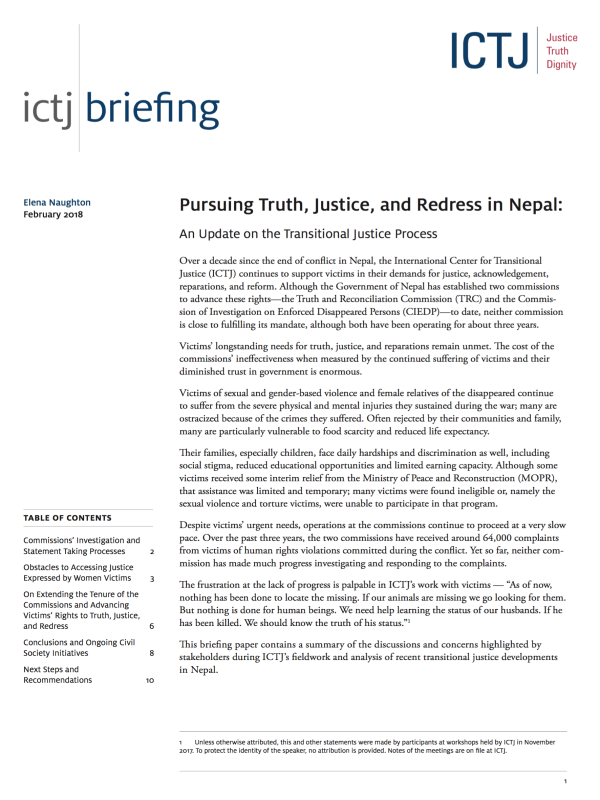 Over a decade since the end of conflict in Nepal, the International Center for Transitional Justice (ICTJ) continues to support victims in their demands for justice, acknowledgment, reparations, and reform. While the Government of Nepal has established two commissions-the Truth and Reconciliation Commission (TRC) and the Commission of Investigation on Enforced Disappeared Persons (CIEDP)-to advance these rights, neither commission is close to fulfilling its mandate, although both have been operating for about three years.

Victims' longstanding needs for truth, justice, and reparations remain unmet. The cost of the commissions' ineffectiveness, when measured by the continued suffering of victims and their diminished trust in government, is enormous. Victims of sexual and gender-based violence and female relatives of the disappeared continue to suffer from the severe physical and mental injuries they sustained during the war; many are ostracized because of the crimes they suffered. Often rejected by their communities and family, many are particularly vulnerable to food scarcity and reduced life expectancy. Members of their families, especially children, face daily hardships and discrimination as well, including social stigma, reduced educational opportunities, and limited earning capacity. Although some victims received some interim relief from the Ministry of Peace and Reconstruction (MOPR), that assistance was limited and temporary; moreover, many victims were found ineligible for that program, while others, namely victims of sexual violence and torture, were unable to participate in it.

Despite victims' urgent needs, operations at the commissions continue to proceed at a very slow pace. Over the past three years, the two commissions have received around 64,000 complaints from victims of human rights violations committed during the conflict. Yet so far, neither commission has made much progress investigating and responding to these complaints.

The frustration at the lack of progress is palpable in ICTJ's work with victims.

"As of now, nothing has been done to locate the missing. If our animals are missing we go looking for them. But nothing is done for human beings. We need help learning the status of our husbands. If he has been killed. We should know the truth of his status." —Workshop participant.

This briefing paper contains a summary of the discussions with and concerns raised by stakeholders during ICTJ's fieldwork and analysis of recent transitional justice developments in Nepal.