The Place of Reconciliation in Transitional Justice 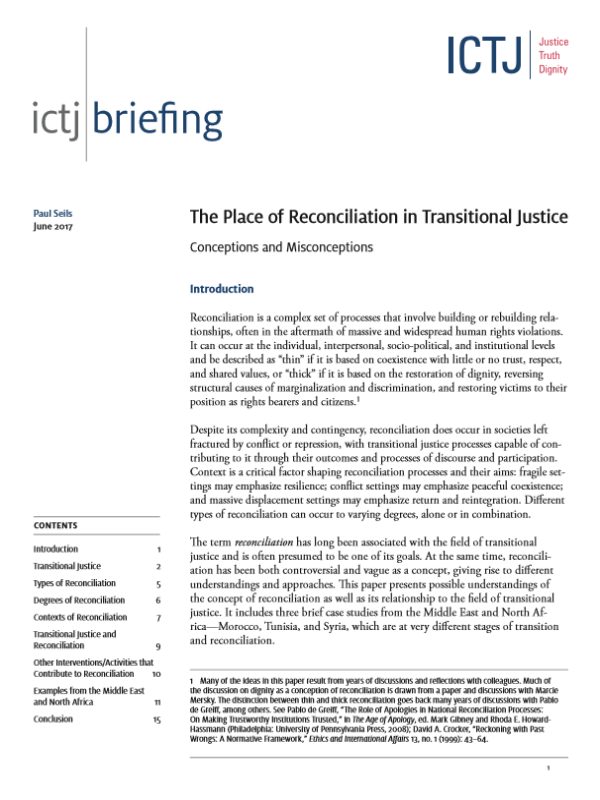 Reconciliation is a complex set of processes that involve building or rebuilding relationships, often in the aftermath of massive and widespread human rights violations. It can occur at the individual, interpersonal, socio-political, and institutional levels and be described as “thin” if it is based on coexistence with little or no trust, respect, and shared values, or “thick” if it is based on the restoration of dignity, reversing structural causes of marginalization and discrimination, and restoring victims to their position as rights bearers and citizens.

What are the different types of reconciliation?

Individual Reconciliation: In order to rebuild their lives and their relationships with others, victims may have to reconcile themselves with their past experiences, including the harms, suffering, and damage that have resulted from human rights violations. While this is a conception of reconciliation that is often overlooked, it emerges frequently in work with victims.

Interpersonal Reconciliation: Often focusing on the relationship between victims, perpetrators, or beneficiaries of rights violations, interpersonal reconciliation can involve processes based on acknowledgement of past wrongs, reform, and forgiveness between individuals. This type may draw on religious understandings of reconciliation.

Socio-political Reconciliation: Socio-political reconciliation focuses on relations between groups—social, political, ethnic, religious, or other—in divided societies. In contexts where existing parliamentary and other structures may be relatively strong, processes may lead to respect for others who hold different beliefs and to a commitment to resolve differences through agreed-on, non-violent means. In other contexts, where society has no political history of strong institutions, agreements can commit to acknowledgment of harms done and respect for others the future.

To what degree can reconciliation be established?

Relationships can be built or rebuilt in different ways and to different degrees. This is often discussed in terms of “thin” or “thick” reconciliation, although the distinction is not always clear cut. Furthermore, reconciliation can play out on the vertical and horizontal axes to smaller or greater degrees.

Restoring dignity in this sense may require processes aimed at countering negative attitudes, restoring those who suffered violations to their proper position as rights bearers and citizens, and reversing or reducing the structural causes of marginalization and discrimination. It takes seriously the social and economic harms that have been caused by violations and taking steps to remedy them.

How does context affect reconciliation?

As with transitional justice generally, context determines to a large extent what reconciliation means, what relationships need to be restored, and how much progress can be made.

Religious and other beliefs

In South Africa, the discourse of the Truth and Reconciliation Commission emphasized largely a religious conception of reconciliation. It also invoked the notion of Ubuntu, an ethical approach that emphasizes common humanity in order to promote broader concepts of healing and harmony. In Chile, the transition was more about the need to overcome societal divisions between the political left and right, and respect the rule of law, and protection of human rights.

In Argentina, the emphasis was less on fostering respect for different political beliefs and more on restoring trust in state institutions and the demonstration of their efficacy in protecting human rights. In particular, there was a need to restore the military as an institution to its place in the democratic order and in reestablishing the rule of law over state terror.

In contexts of fragility, where institutions are weak and resources scarce, a development lens may emphasize the importance of reconciliation for notions of resilience—the capacity to absorb, recover from, and resist shocks and crises, including systemic rights violations. Resilience in peacebuilding contexts is seen to include psychosocial recovery, social cohesion, and inclusive governance; development practitioners connect more resilient societies with levels of reconciliation and trust.

In contexts of conflict-affected states, a security lens may emphasize the importance of reconciliation for peaceful coexistence. The dynamics of armed conflicts can be more complex than those of authoritarianism, particularly in terms of the range of non-state armed actors involved, the cross-border movement of combatants, and the scale and nature of violations committed. Reconciliation is likely to involve the reintegration of ex-combatants into their communities, often through local or traditional practices.

In contexts of large-scale displacement, which are very often those of fragile and conflict-affected states, the notion of return may emphasize the importance of reconciliation for their reintegration. Reintegration may depend on reconciliation between returnees and state institutions, which failed to protect them, as well as between returnees and those who remained in their communities for the duration of the conflict. The restoration of dignity may require specific measures, such as the restitution of land and property, and addressing any psychosocial or socioeconomic damage done.

Are reconciliation and justice compatible?

To the extent that transitional justice processes succeed in recognizing victims, restoring trust in the state and one’s fellow citizens, and preventing future violations, they may positively contribute to vertical and/or horizontal reconciliation in different contexts.

In Argentina, the prosecution of the military leadership and the reparations program implemented for victims were important in restoring trust in the institutions of democracy and in placing the military in its rightful place in that context. In Chile and South Africa, a great deal of weight was placed on making the truth known about what had happened, why, and which institutions were responsible through their truth and reconciliation commissions.

To the extent that transitional justice processes succeed in recognizing victims, restoring trust in the state and one’s fellow citizens, and preventing future violations, they may positively contribute to vertical and/or horizontal reconciliation in different contexts.

Processes, therefore, embrace consultation, media relations, gender sensitivity, political alignment, and broad civil society engagement. The case of transitional justice fostering divisions, if seen as lacking legitimacy or impartiality, is likely if it is inappropriate for the context or without participation and transparency. Reconciliation may have negative connotations if it is promoted by actors as the only possible outcome, as a substitute for accountability and recognition, or as a synonym for criminal justice.

Where are some recent examples of transitional justice and reconciliation?

After decades of abuses committed by the government, Morocco began to undertake a multi-stage political reform process in the country. This process, through which reconciliation became part of the public discourse, included granting amnesty to political prisoners and the return of the forcibly disappeared; creating an arbitration body to grant reparations to victims; and establishing the Equity and Reconciliation Commission (IER).

A number of different measures have contributed to reform, including: individual and community reparations; history and memory initiatives; addressing structural issues that led to prior violations; and the re-establishment of trust between citizens and the state. Reconciliation in Morocco at one level has involved a socio-political process, through the creation of a political community based on democratic values. Contributing to this was the acknowledgement of the country’s social and cultural diversity in formal processes. At another level, reconciliation has involved reestablishing trust between citizen and state institutions, further emphasized by civil society activism.

Since the overthrow of the previous government, Tunisia’s transition has focused on addressing the Ben-Ali regime’s legacies of abuse and corruption while preventing their recurrence. This has included passing a Transitional Justice Law in 2013, which established a Truth and Dignity Commission (TDC) to examine and report on past abuses and the Specialized Judicial Chambers to pursue criminal accountability. While a lack of understanding of reconciliation still exists, it is understood in terms of personal and collective dignity, political recognition and reform, economic justice, equality, social stability, and restoring victims’ rights.

Discourse in Tunisian society involves the idea accountability should prelude reconciliation, and the relationship between the state and citizens should be reformed through the judiciary. There are also strong beliefs that reconciliation will require the recognition of long-term social exclusion and regional inequality through advocacy of civil society and the continued transitional justice process.

Syria presents an extremely challenging context for reconciliation processes because of ongoing conflict, atrocities, and almost half of the country’s population is displaced. Steps should be taken now to ensure the participation of displaced persons and other victims in discussions about return and reconciliation upon a political settlement being reached. The priorities among refugees for a return process include security, the assurance of basic needs, access to government services, psychosocial support and family reunification. Significant divisions have emerged and the make-up of Syrian society, as well as divisions between those who left and those who remain, will make progress toward reconciliation complicated.

The term coexistence is more common than reconciliation, referring to re-establishing social ties, and is seen as an obligation. Dignity is another term used by many refugees, which is related to reconciliation, because loss of dignity is viewed as one of the most significant harms of the displacement experience. Many seek tribal justice mechanisms because of mistrust of national and international judicial systems. Interviews with refugees and civil society actors highlight the harms and losses experienced by Syrians, both individually and collectively.