Failure to Reform: A Critique of Police Vetting in Kenya 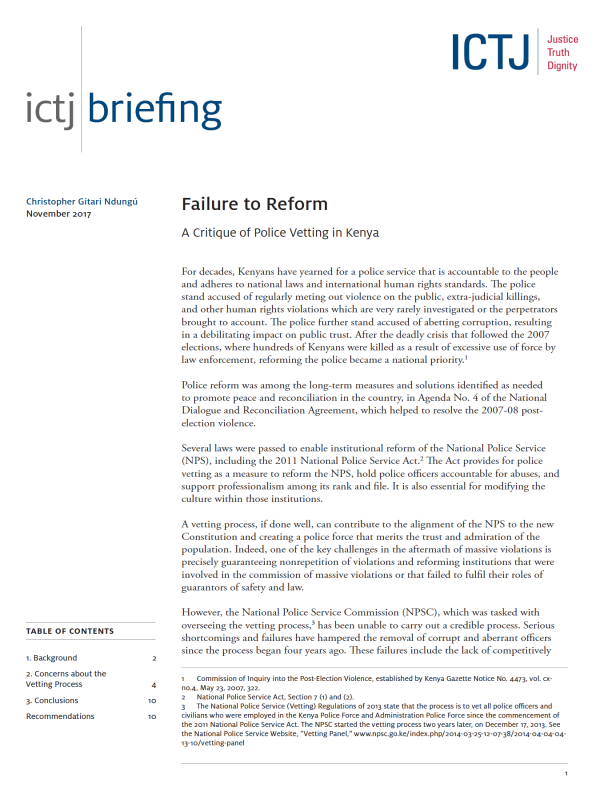 Police reform was among the long-term measures and solutions identified as needed to promote peace and reconciliation in the country, in Agenda No. 4 of the National Dialogue and Reconciliation Agreement, which helped to resolve the 2007-08 post-election violence.

Several laws were passed to enable institutional reform of the National Police Service (NPS), including the 2011 National Police Service Act. The Act provides for police vetting as a measure to reform the NPS, hold police officers accountable for abuses, and support professionalism among its rank and file. It is also essential for modifying the culture within those institutions.

A vetting process, if done well, can contribute to the alignment of the NPS to the new Constitution and creating a police force that merits the trust and admiration of the population. Indeed, one of the key challenges in the aftermath of massive violations is precisely guaranteeing nonrepetition of violations and reforming institutions that were involved in the commission of massive violations or that failed to fulfil their roles of guarantors of safety and law.

However, the National Police Service Commission (NPSC), which was tasked with overseeing the vetting process, has been unable to carry out a credible process. Serious shortcomings and failures have hampered the removal of corrupt and aberrant officers since the process began four years ago. These failures include the lack of competitively recruited staff, a seeming inability to vet senior police officers implicated in graft and other violations, allegations of corruption within the NPSC, and the exclusion of media from covering the vetting process.

Troublingly, amid reform efforts, Kenya has witnessed an increased number of human rights violations committed by police officers. Extra-judicial executions and enforced disappearances have markedly increased, possibly indicative of police officers’ lack of fear of repercussions from the vetting process or any other accountability measures. The fact that the police vetting process will only affect a small percentage of the police population has essentially neutered its sting. There is now a sense that the police are insulated from accountability demands for which the vetting process was supposed to achieve.

In addition, key actions by State officials have actively undermined the process. For example, the late Minister for Interior, Joseph Nkaissery, on a number of occasions openly dismissed and criticized the basis and purpose of the vetting process. These pronouncements underscored the NPSC’s dwindling political and financial support from the Executive.

This has contributed to apathy and loss of confidence in the process. Countrywide consultations with human rights defenders and civil society suggest that these weaknesses are so severe that the NPSC will not achieve its objectives by the end of its mandate on October 2018.

This paper details ways that the police vetting process has fallen short and makes recommendations to the Kenyan government and the NPSC on how to salvage the process. In particular, it calls on the NPSC to halt the process and issue a comprehensive interim report. It also calls for a major overhaul of the process to enable proper targeting, efficiency through delegation, and injection of professionalism by hiring experts, which would infuse much-needed integrity into the NPSC.