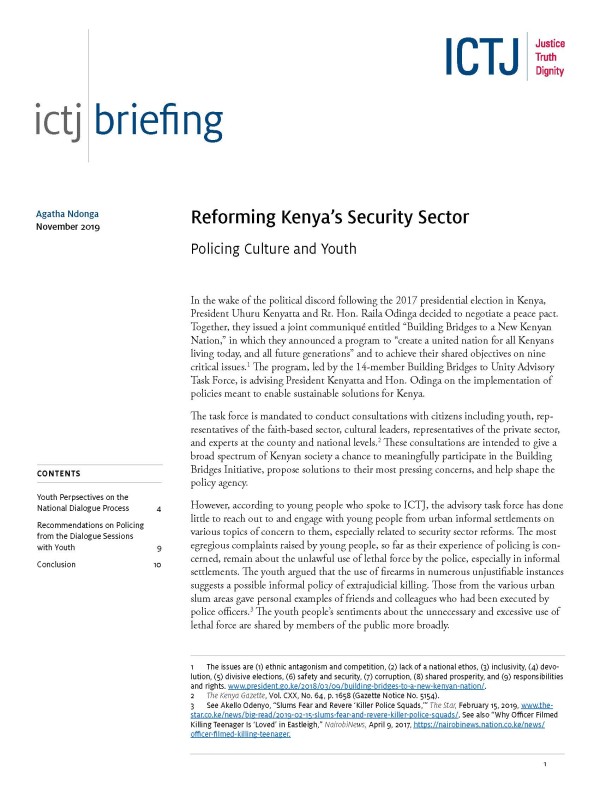 In the wake of the political discord following the 2017 presidential election in Kenya, President Uhuru Kenyatta and Rt. Hon. Raila Odinga decided to negotiate a peace pact. Together, they issued a joint communiqué entitled “Building Bridges to a New Kenyan Nation,” in which they announced a program to “create a united nation for all Kenyans living today, and all future generations” and to achieve their shared objectives on nine critical issues. The program, led by the 14-member Building Bridges to Unity Advisory Task Force, is advising President Kenyatta and Hon. Odinga on the implementation of policies meant to enable sustainable solutions for Kenya.

The task force is mandated to conduct consultations with citizens including youth, representatives of the faith-based sector, cultural leaders, representatives of the private sector, and experts at the county and national levels. These consultations are intended to give a broad spectrum of Kenyan society a chance to meaningfully participate in the Building Bridges Initiative, propose solutions to their most pressing concerns, and help shape the policy agenda.

However, according to young people who spoke to ICTJ, the advisory task force has done little to reach out to and engage with young people from urban informal settlements on various topics of concern to them, especially related to security sector reforms. The most egregious complaints raised by young people, so far as their experience of policing is concerned, remain about the unlawful use of lethal force by the police, especially in informal settlements. The youth argued that the use of firearms in numerous unjustifiable instances suggests a possible informal policy of extrajudicial killing. Those from the various urban slum areas gave personal examples of friends and colleagues who had been executed by police officers. The youth people’s sentiments about the unnecessary and excessive use of lethal force are shared by members of the public more broadly.

Between April 15 and May 3, 2019, ICTJ held a number of consultations with young people from several informal settlements in Nairobi and Mombasa to reflect on their understanding of security sector reforms and their connection to the ongoing national dialogue process, particularly as it relates to inclusion. These informal settlements were chosen because they had been most affected during the 2007 and 2017 election violence, with numerous violations reported in each area. ICTJ used its recent briefing paper on security sector reform and inclusion to guide this dialogue. About 120 young people, from Dandora, Kayole, and Mukuru Kwa Njenga in Nairobi and Changamwe in Mombasa, participated in the focus group discussions; between 30 and 40 young people took part in each discussion. Their instructive input served as the basis for this briefing paper and should form a key part of discussions about the national dialogue process in relation to young people’s inclusion and security.