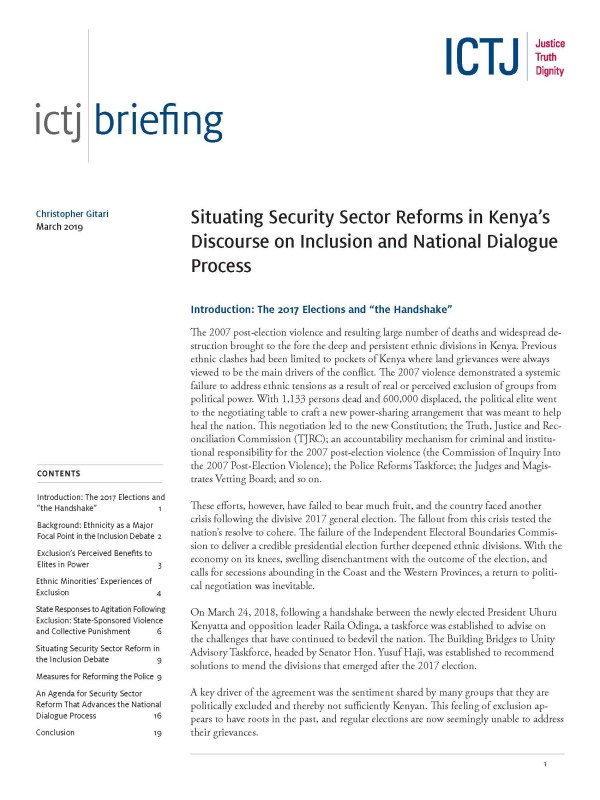 The 2007 post-election violence and resulting large number of deaths and widespread destruction brought to the fore the deep and persistent ethnic divisions in Kenya. Previous ethnic clashes had been limited to pockets of Kenya where land grievances were always viewed to be the main drivers of the conflict. The 2007 violence demonstrated a systemic failure to address ethnic tensions as a result of real or perceived exclusion of groups from political power. With 1,133 persons dead and 600,000 displaced, the political elite went to the negotiating table to craft a new power-sharing arrangement that was meant to help heal the nation. This negotiation led to the new Constitution; the Truth, Justice and Reconciliation Commission (TJRC); an accountability mechanism for criminal and institutional responsibility for the 2007 post-election violence (the Commission of Inquiry Into the 2007 Post-Election Violence); the Police Reforms Taskforce; the Judges and Magistrates Vetting Board; and so on.

These efforts, however, have failed to bear much fruit, and the country faced another crisis following the divisive 2017 general election. The fallout from this crisis tested the nation’s resolve to cohere. A return to political negotiation was inevitable.

A key driver of the agreement was the sentiment shared by many groups that they are politically excluded and thereby not sufficiently Kenyan. This feeling of exclusion appears to have roots in the past, and regular elections are now seemingly unable to address their grievances.

Elections in Kenya are sort of an ethnic census, a zero-sum game where the winning ethno-political outfit is rewarded, and the losers are marginalized and excluded. Professor Karuti Kanyinga notes rightly that “the state became the institution critically necessary for changing the economic fortunes of individuals and their ethnic constituencies.” Once in power, the political elites seek economic gain for themselves and those around them at the exclusion of the other ethnic groups in the country.

The economic, social, and political exclusion of ethnic minority groups results in inequalities and human rights violations that have lasting, adverse effects on those communities for generations. Such inequalities are reflected in a disproportionate lack of access to key services and patterns of poverty in various regions that are visible today. While poverty is a national problem, certain regions marked by economic marginalization experience disproportionate burdens of poverty.  These imbalances in poverty are attributable to exclusionary practices in the distribution of public resources.

This paper explores political exclusion in Kenya and its consequences on the social fabric of the nation. It draws from past governmental reports and analysis to formulate new recommendations that can inform current discourse. It first provides an overview of ethnicity in Kenya, its role in the country’s politics and the debate on inclusion, and how political elites often benefit from ethnic tensions. Next, it describes experiences of exclusion by minority groups, as well as state responses to exclusion. The paper then looks at efforts to reform the security sector, specifically the police who have contributed to ethnic violence and committed human rights abuses. It closes by offering some general guiding principles and recommendations for developing an agenda to reform the security sector and for a national dialogue process.