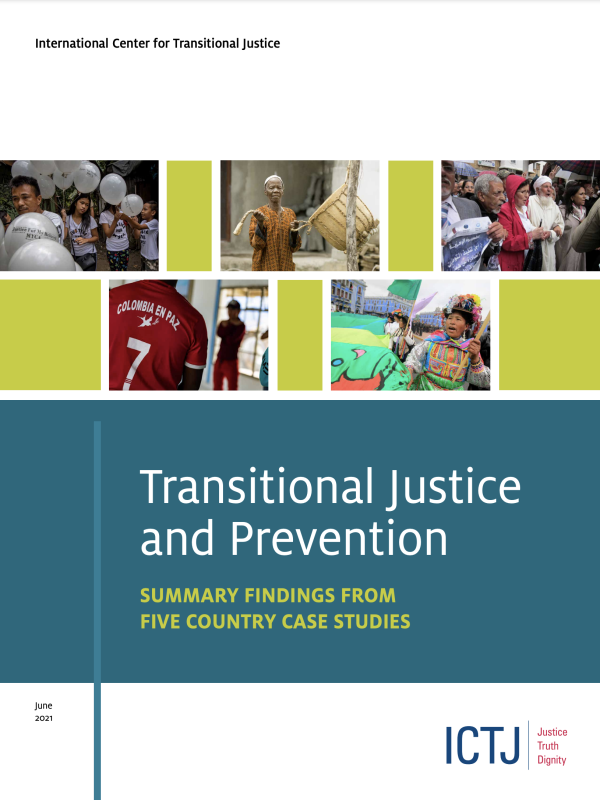 This report summarizes the findings of an ICTJ research project exploring the role that transitional justice can play in preventing both massive and serious violations of human rights as well as violence and violent conflict more broadly. Its conclusions are drawn from case studies of five countries—Colombia, Morocco, Peru, the Philippines, and Sierra Leone—representing a range of complex contexts in which societies are grappling with violent conflicts, repressive governments, or acute inequality. It argues that transitional justice should be an integral element of conflict prevention, peacebuilding, and sustainable development.

The report contends that transitional justice can contribute to prevention by: (1) addressing the exclusion and other harms that victims experience due to human rights violations they suffered; (2) addressing the exclusion and related injustices that communities and social groups face as a result of targeted violations and structural marginalization; (3) strengthening the rule of law and making it more inclusive; and (4) catalyzing the reform of institutions and laws that have perpetuated violence and discrimination as a means to exclude marginalized groups.

The report also identifies a number of limitations to the preventive impact of transitional justice, including: (1) tensions that can exist between justice and prevention initiatives, especially in the short term; (2) justice processes that may be seen to be insufficiently participatory or even exclusionary themselves; (3) a lack of implementation of measures and reforms that are designed or recommended; and (4) contextual factors such political dynamics, security concerns, and the absence of broader structural change.