An Uncertain Homecoming: Views of Syrian Refugees in Jordan on Return, Justice, and Coexistence 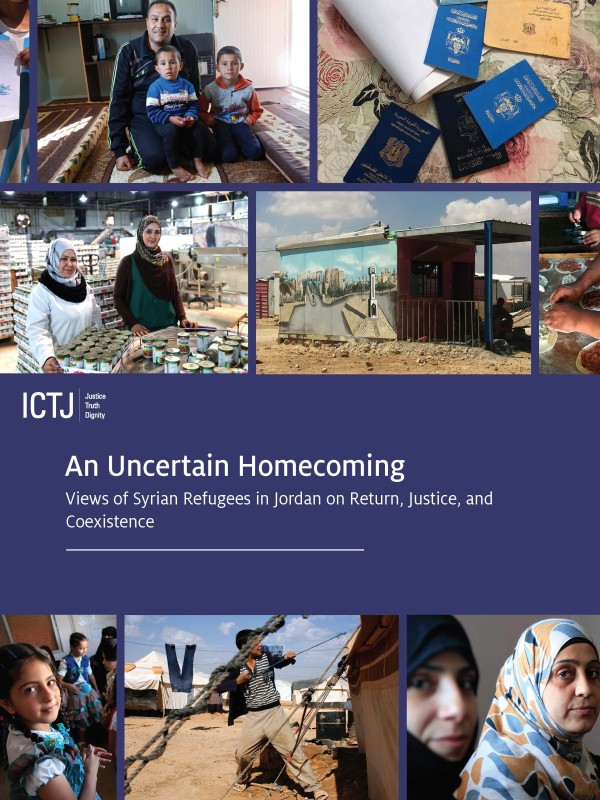 The protracted conflict in Syria continues to have serious and widespread ill effects on the lives of Syrian individuals, households, and communities. The majority of the Syrian population has been affected by the war, including women, children, and elderly, with millions forced to leave in search of protection and safety. Most have sought refuge in neighboring countries, including Jordan, Lebanon, and Turkey, and beyond the region, in Europe and elsewhere.

After the war ends, drafting a new constitution, reconstruction efforts, reforming state institutions, holding elections, and mending the economy will be necessary but not sufficient to secure peace at the local and community levels. A peacebuilding process that fails to understand the political, sectarian, and social dynamics at the local level will also fail to promote peaceful coexistence or recreate social trust. A bottom-up approach to refugee return, justice, and coexistence that engages refugees, along with local civil society and communities, and that prioritizes listening to and addressing local needs is critical.

This study addresses the impact of the conflict and displacement on Syrian refugees in Jordan and the potential for justice and coexistence among Syrian communities. It aims to provide a better understanding of the experiences of Syrian refugees, including the harms and losses they have suffered, both individually and collectively, and their expectations, concerns, and priorities for potential durable solutions to their displacement, including the conditions that would facilitate return to their country and communities and help them to overcome divisions, rebuild relationships, and promote justice.

The concerns raised by the refugees interviewed for this study are pressing, particularly after Syrian government forces retook most of the country last year. The current regime, which is run by a feared and notorious security system, is winning the war militarily but has offered no acknowledgment of committing any crimes or abuses and therefore no reform agenda for its security institutions, making it extremely difficult—if not impossible—for refugees to return in the short term.

Despite the continued lack of security, some host countries have used the near-complete return of government control as a pretext to call for the large-scale return of refugees. Another unfortunate push factor is the dwindling funding provided for refugees by the international community, despite the position of the Office of the UN High Commissioner for Refugees (UNHCR) that present conditions in Syria are not conducive for voluntary repatriation in safety and dignity.

The focus on coexistence in this study shows the extent of the challenges, revealing the level of enmity resulting from injustice and the need to identify adequate steps for return that would allow refugees to feel safe in going back to their homes and living with members of community groups perceived to be hostile. The general sense among interviewees was that the change to government control has brought a situation of victor’s justice and that there will be no justice in Syria, particularly as long as the regime remains in power. This study demonstrates the need for forms of justice to be adopted nationally and internationally to address war crimes and crimes against humanity that have taken place in Syria.

Syrian refugees’ experiences and views are shaped in important ways by the geographical areas in Syria from where refugees came as well as their gender, age, and faith. Regarding return, interviewees from all areas expressed a common concern about safety and security, especially fears of arrest and detention, punitive or retaliatory acts, indiscriminate shelling, physical destruction, sectarian divisions, and perceived demographic changes.

Economic concerns included damage to or occupation of homes, broader destruction of the country’s physical infrastructure, and employment. Women interviewees, especially widows, expressed particular concern about going back to Syria without a house or source of income. Syrian legislation that allows the government to claim abandoned property was perceived by some as an effort to dissuade refugees from returning, in part because of the difficulty of obtaining documents proving ownership.

Refugees articulated skepticism about the possibility of achieving justice, although some spoke about the need for truth, reform, accountability, compensation, divine justice, and restitution of housing, land, and property. Views on future coexistence were more varied. For refugees from Daraa’s Bosra al-Sham and Homs, concerns centered around Sunni-Shi’a and Sunni-Alawite relations. Among refugees from Daraa and Swayda, concerns also had to do with relations between Sunni and Druze. In each case, their concerns were shaped by their perceptions of  the roles of different groups in the violence, political dynamics, and their personal experiences during displacement.

Children and youth spoke about safety and security, sectarian divisions, and especially the trauma caused by what they had seen and experienced. Men spoke about their fear of arrest, detention, torture, and forced conscription, in particular, while women related their traumas and larger responsibilities, family relationships, and economic challenges, as well as their resilience and new social roles.

Intersectional vulnerabilities among different social groups have also affected the views of refugees, revealing similar concerns about safety and security and distrust of the state or fear of armed opposition groups. For some, security meant removing the current regime and holding its members accountable or dismantling militias and armed groups. Some said they could not forgive those who supported the opposition, which they perceived as causing the destruction of the country.

Refugees’ experiences while in Jordan also have implications for return, justice, and coexistence. They have faced a range of challenges, including social and economic exclusion, tensions with host communities, and restrictive state polices. While these have left refugees vulnerable as a whole, particular groups are especially marginalized, and refugees in camps often feel trapped and excluded. At the same time, refugees both inside and outside of camps have shown their resilience in the face of hardship.

In efforts to find durable solutions, pursue justice, and foster coexistence, refugees must be part of the process. The following steps are therefore recommended: