“We Want to Be Heard”: Obstacles to Women Taking Part in Participatory Mechanisms for Dealing with Victims of the Internal Armed Conflict 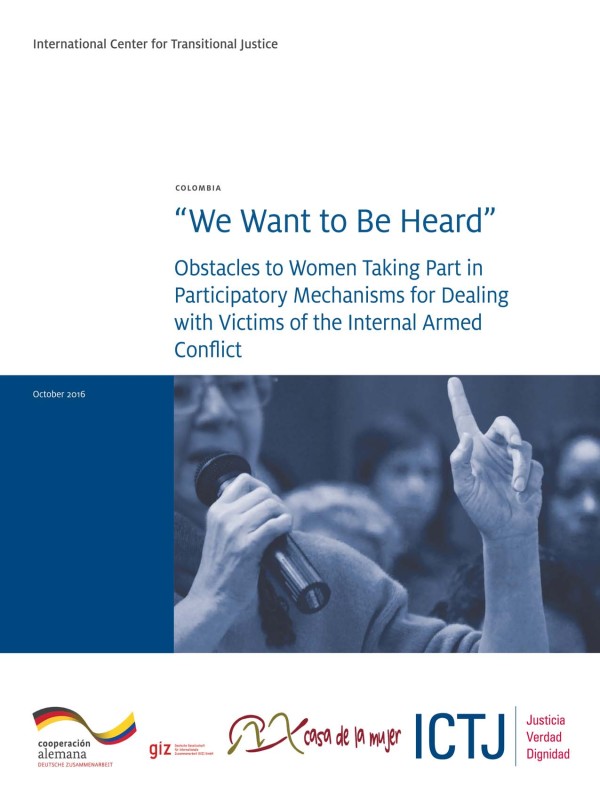 At various points in this long conflict, several governments and institutions have tried to implement measures aimed at promoting peace, accountability for human rights violations and assistance to victims. The most recent effort was Congress’ passing of Law 1448 of 2011, also known as the Victims and Land Restitution Law (Victims Law). This legislation established reparations and land restitution programs for victims of the armed conflict. At the same time, it contains norms that guarantee the effective participation of victims in the different stages of reparations. To this end, it mandates the setting up of the Roundtables for the Participation of Victims at a municipal, district, departmental and national level as well as the designing of a protocol for effective participation.

It is important to bear in mind that women account for almost 50% of all victims and that the patterns of violence they experience may be different from those experienced by men. The realities they face in the context of the armed conflict in the regions under study show a continuum in the violence exercised against them, their subordinate role, their oppression, the threats and harassment by the armed actors and the lack of economic resources to live a dignified life. Thus, women’s participation in the framework proposed under Law 1448 of 2011 is imperative in order for their experiences and suggestions to be made known and in order to enable them to influence the implementation of public policies that affect them. Likewise, it is essential to identify the social, economic, political, institutional and cultural obstacles that they and their organizations face in participating in these ways.

This research looked at the obstacles faced by women and their organizations in the participatory processes for the implementation of Law 1448 of 2011 in the departments of Cesar and Meta and the Capital District of Bogotá. The information was gathered through interviews with the authorities and public servants at a municipal and departmental level, as well as workshops with organized and unorganized victims.

The obstacles faced by women can be grouped into three categories: those derived from their status as women; sociopolitical and economic; and institutional and organizational. Some of these have also become serious impediments to the participation of women victims becoming a mechanism to transform this situation.

The first group of obstacles is the result of the social construction of what it means to be a woman and the implications of this on institutional responses to restoring and guaranteeing the effective enjoyment of their rights. Firstly, this means that women have difficulty in acknowledging that they have a right to participate in the public sphere. Linked to this is an ignorance of their rights and the laws and public policies that protect them, including the Victims Law, and the opportunities they have to report crimes and demand justice. Added to this, among other factors, are the difficulties caused by the dynamics of the armed conflict, such as the ripping apart of the social fabric, the destruction of means of economic sustenance, the traumas felt in the wake of atrocities and being uprooted from one’s community.

In the second category, socio-political and economic obstacles faced include the fact that participation is limited to a purely formal aspect for the sake of political correctness, and reduced to a series of established mechanisms limited by legal provisions. Consequently, the spaces are only, or mainly, useful for justifying decisions in which the women have not taken part, or to meet political or legal requirements.

The precarious socio-economic situation in which many women live is another factor that curtails their participation in the spaces of the Victims Law. Lastly within this second grouping, the persistence of the armed conflict and the increasing threats against and harassment of leaders were identified by the women as significant obstacles that curb their participation.

The third and final category of obstacles identified is related to organizational and institutional barriers and, in turn, comprises three aspects. Firstly, the difficulties encountered with public institutions and the experience and abilities of those charged with dealing with victims. Secondly, the difficulties in organizing victims and the failings of these organizations in processes of participation and restoration of rights. Lastly, there is the distrust of public institutions, which can be seen in the complaints about the ineffectual, feeble and inefficient (insufficient?) assistance given by the state as well as in, the identification of the state as one of those responsible for women’s plight.

Overcoming these obstacles and guaranteeing women’s access to the participatory spaces created under Law 1448 of 2011 requires decisive action by the state institutions entrusted with its implementation. In order to strengthen these participatory mechanisms, the involvement of women victims and the promotion of their proposals must be incentivized and improved.

Improving the response of public institutions requires access to accurate and disaggregated data on the socio- economic conditions of the victims, the design of strategies to minimize those conditions that curtail their participation, and training of public servants to incorporate a rights-based and differential approach to dealing with women victims. Finally, there is a need to improve the protective measures to guarantee the security and physical integrity of these victims, their leaders and organizations.

It is not enough to include a strict gender parity in spaces for participation, but, rather, there is a fundamental need for measures that change prejudices, judgments, and social imagery, at an individual level (between men and women), at the institutional level, and in the wider society.

These conclusions are based on the research conducted in reference to the participation of women in mechanisms contemplated in the Victims’ Law. It is worth noting that the realities women face in the context of the armed conflict, as narrated by interviewees at workshops in three cities (Valledupar, Villavicencio, and Bogotá), reflect a continuum of violence against them. This continuum encompasses their subordination and oppression, threats and harassment by armed actors, and the lack of economic resources to live a dignified life.

It is important to clarify that while the research did not look at how institutional obstacles to participation affected male and female victims differently, the findings indicate such obstacles impact women to a greater degree. This is partly due to the fact that women are not recognized as active agents of political agreements. Their oppression and subordination is not acknowledged, and, therefore, democracy is not reconfigured in order to effectively facilitate the full enjoyment of women’s rights. It is not enough to include a strict gender parity in spaces for participation, but, rather, there is a fundamental need for measures that change prejudices, judgments, and social imagery, at an individual level (between men and women), at the institutional level, and in the wider society.

The most significant conclusions are:

Women’s participation was reduced to a formality.

Armed conflict and violence against women is the most significant obstacle.

The rights of women victims by public servants are not recognized.

The following recommendations suggest how obstacles that impede women’s participation in mechanisms established under the Victims’ Law could be overcome.

Response to the Public Institutions

Security Situation for the Participation of Women Victims