“The War As I See It:” Youth Perceptions and Knowledge of the Lebanese Civil War 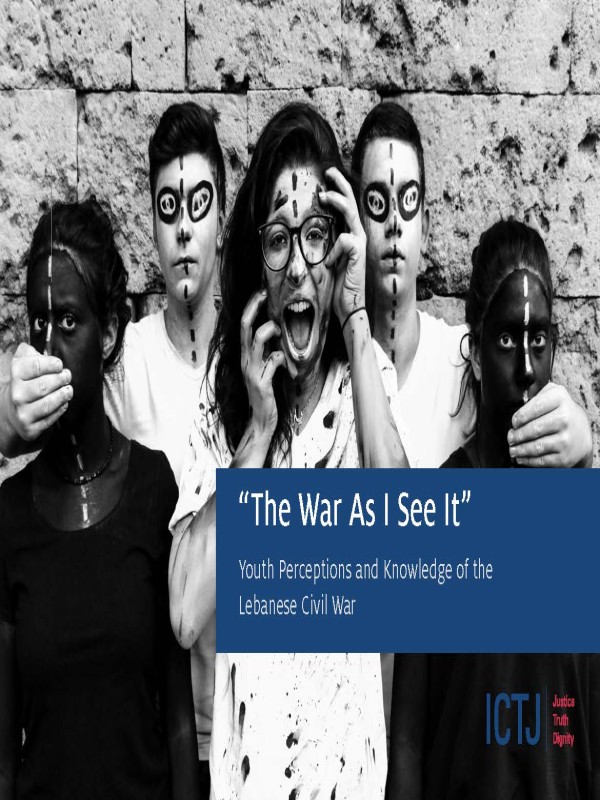 Since the negotiated political settlement that ended the war in 1990, no serious attempt has been made to deal with the war’s legacy. Accountability for human rights violations committed during the conflict has been absent. There has been no effective truth-seeking process, formal acknowledgement of victims’ suffering, or the establishment of an accurate and objective war narrative. This has allowed political and social factions to compete for control of the historical record, with the different sides blaming each other, resulting in multiple politicized and fragmented narratives.

Because school curricula do not cover Lebanon’s war or recent history, today most accounts of the conflict are based on personal memories transmitted from generation to generation by family members and neighbors who survived the war. This has left young people without an official source of information about the war to help them to understand it and its legacy, although it often forms part of their personal history and identity. As a result, the post-war generation, and the larger public, does not know what really happened during the conflict. With waves of instability and political violence that risk spiraling out of control, recalling the prewar era for many who lived through the war, young people are left vulnerable to political manipulation.

"Features of the Truce" by Christina Boutros

However, many Lebanese communities, teenagers, and young adults are asking questions about the past and their family members’ suffering. In response to this, in October 2015, the International Center for Transitional Justice, with the support of the Embassy of Switzerland in Lebanon, launched a photo contest for youth (aged 15–25), titled “The War As I See It.” The project involved several elements: a photo contest for young people aged 15 to 25; a traveling exhibit featuring 26 photo entries, which ran from September 2016 to February 2017; and discussions held during the exhibits to generate constructive conversation about the past, particularly among experts, academics, and young people.

This publication presents the findings of that project. It showed that the generation born after 1990 lacks basic information about the war and that the young people who participated had a genuine curiosity to learn about and reflect on the war. Academics and experts who participated in the discussions expressed the importance of promoting knowledge and discussion of the civil war and its causes among young people, in order to build durable peace and prevent the recurrence of violence.

In general, youth participants’ knowledge about the civil war and post-war violence and the importance of clarifying what happened in the past increased as a result of the exhibit and discussion. In total, 82.9 percent of participating youth reported that the exhibit and discussion had made them reflect on how the war had affected them, their community, and Lebanese society as a whole. Of these participants, 66.4 percent reported that the exhibit and discussion showed that many different communities and groups have been affected by the war. Many participants stated that they have more empathy for different people’s experiences of the war and post-war violence after participating in discussions. At the same time, numerous participants expressed concern about the future of their country, fearing the recurrence of armed conflict and citing a lack of trust in leaders and state institutions.

Going forward, tackling the lack of knowledge about the war is essential to countering the situation of impunity for past violations and the injustice that victims face. Engaging youth and achieving change could enable young people to start elaborating a war narrative from a different perspective, one focused on victims’ rights, and foster demand for accountability. Generating experiences and best practices about truth telling at the local level could also help to build momentum for change at the national level.