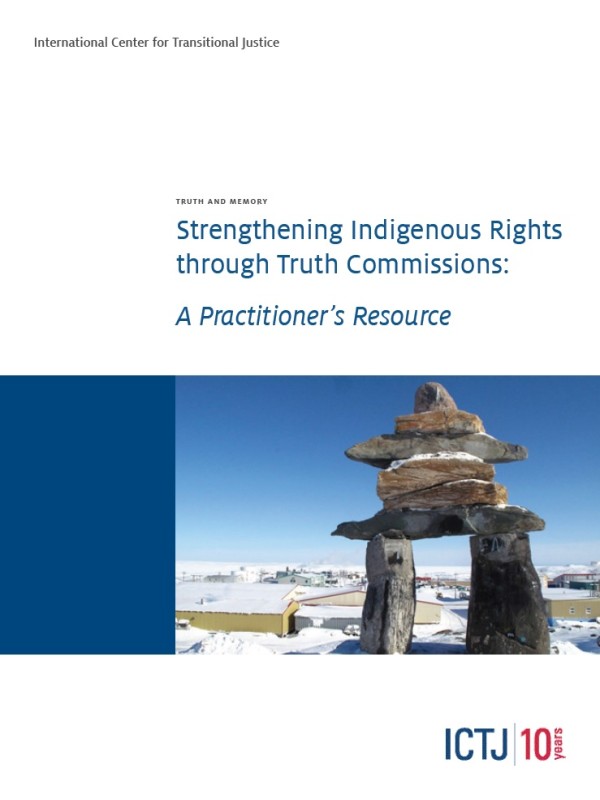 Susceptibility to violent conflict and poverty are both a cause and an effect of another phenomenon affecting indigenous peoples: their weak voice in the political arena and in judicial institutions. As a result, when societies decide to confront the legacy of war, tyranny, or entrenched injustice, the suffering of indigenous communities is often marginalized or inadequately addressed.

Some truth commissions have addressed cases of violence against indigenous peoples, such as those in Guatemala, Peru, and Paraguay. New commissions are now working or emerging on the horizon that will investigate contexts where indigenous peoples were targeted by gross human rights violations, including in Canada, Cote d’Ivoire, and Nepal.

This trend has coincided with the international community’s historic recognition of the rights of indigenous peoples as human rights and the extraordinary achievement of the 2007 UN Declaration on the Rights of Indigenous Peoples.

This resource book focuses on truth commissions mandated to look at a period of human rights violations that particularly affected indigenous communities, such as those listed above. It is an initial effort to systematically organize lessons learned and make further progress by designing truth processes that are fully compliant with the rights of indigenous peoples.

Truth commissions have typically been established as instruments to reaffirm goals of unity and reconciliation within a nation-state. The nation to be reconciled by a truth commission is usually understood as the one represented by the central government. This model may be inadequate to set the goals of a truth commission dealing with first nations that may, or may not, recognize themselves fully as part of the state.

Commissions have usually focused on instances of recent violence; cases that can be remembered by individual witnesses and survivors, and that can be recorded in writing for the benefit of policymaking. Indigenous peoples who remember long-term, historical violence affecting a communal way of life, often transmitted through an oral tradition, may find the standard model of truth commission to be alien or insufficient.

Our goal, then, should be to rethink the work of truth commissions to better address indigenous experiences and better serve their rights. On a substantive level we identified the following broad areas for consideration in a truth-seeking approach when engaging indigenous rights:

Based on this substantive discussion, truth commissions should involve indigenous peoples at all stages. Some areas that could be examined include:

Our goal, then, should be to rethink the work of truth commissions to better address indigenous experiences and better serve their rights. 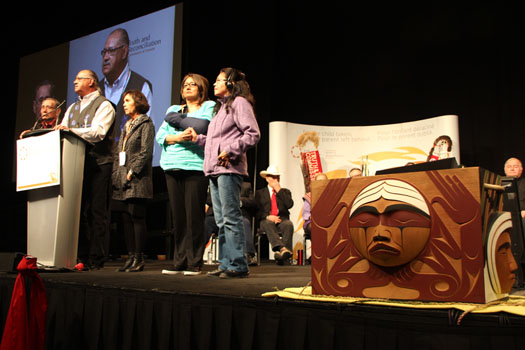 This abuse has long been formally overlooked, at best, and portrayed as a necessary part of “modernization,” at worst. These attitudes, however, are neither sustainable nor justifiable. Indeed, indigenous movements, parties, NGOs, and conferences have become increasingly vocal advocates of indigenous rights—seeking to bring attention to past abuses and ensure a better future for indigenous peoples—as individuals and as collectivities. Drawing support from international agencies such as the United Nations, the International Labor Organization, and various NGOs, indigenous peoples have found various venues for demanding recognition, reparations, and reform.

In the context of these historical political wrongs and this contemporary political momentum, the question is, how can one right these past wrongs? One could imagine many possible instruments of change: democratization; constitutional and institutional reforms; elections; legislation on a range of issues including territorial autonomy, political sovereignty, education, and social services; and international pressure; etc. For ICTJ, the question is, what role can and should truth commissions play in the pursuit of indigenous rights. Can they help redress (some of) these past wrongs? If so, how? This essay serves as an overview to address these basic questions. It is organized in three parts. Part I does some conceptual groundwork by addressing core indigenous agendas. Part II probes the degree to which truth commissions can address these issues, discussing both benefits and recommendations. Part III highlights the challenges and obstacles for truth commissions as instruments in pursuit of indigenous rights.

The underlying argument developed throughout this essay is that truth commissions can serve to bring attention to past abuses and even to provide momentum to advance indigenous agendas with greater force and legitimacy. However, to address and defend core indigenous rights, more fundamental political changes must also be advanced—including political suffrage, representation, and autonomy rights—so as to provide an ongoing mechanism for indigenous people to insert claims into the political arena. Truth commissions are powerful and yet temporary institutions that can highlight issues and set agendas; however, they cannot hold people to account indefinitely or force them to follow their recommendations. In this context, indigenous people and their allies also need to work with other more enduring political institutions (such as constitutions, legislation, elections, and autonomy rights) that can provide ongoing mechanisms to secure and defend rights, both those articulated now and those likely to emerge in the future.

In addressing violations of indigenous peoples’ rights to territory, land, and natural resources, the logic of transitional justice can be problematic for at least two different reasons. The emphasis on restitution, characteristic of the restorative logic of transitional justice, may clash with ethical, political, and legal principles that are just as important, and may neglect considerations of distributive justice.

Second, indigenous peoples’ conception of the conflict that resulted in the deprivation of their rights may differ significantly from that of the mainstream and dominant sectors of society. For example, indigenous people may view the conflict as extending back to the era of colonization and may not agree with the narrower temporal focus of transitional justice policies, which tend to target a specific period of armed conflict or totalitarian rule. Or they may disagree even with the idea that a transition is taking place at all. According to González and Rice: Transitional justice has been utilized in situations of extreme or massive violence such as armed conflict or under dictatorship, while indigenous peoples have often suffered forms of structural violence that are normalized and continue to apply in times of peace, even under otherwise democratic regimes.

In addition, transitional justice policies may emphasize the responsibility of certain actors (such as illegal armed groups) while minimizing the responsibility of others (such as the state itself or private corporations that have provoked, facilitated, or aggravated violations of indigenous groups’ territory, land, and natural resource rights). As Rodolfo Stavenhagen, the first UN special rapporteur on the rights of indigenous people, has stated: “When land ownership is part of the problem, then strong private economic interests make it very difficult for Indigenous communities to obtain justice, particularly when there has been little or no progress in the passing of adequate legislation.”

In this context, the present article seeks to broaden the conceptual and empirical outlook on transitional justice through the inclusion of a new criterion of justice, collective ethnic justice (CEJ),17 which is analytically different from transitional justice and social justice, though their challenges may overlap. We contend that collective ethnic justice is especially significant for addressing violations of indigenous peoples’ rights to territory, land, and resources during conflicts and in contexts of transition, given that the rights at stake are collective in nature and the victims are communities whose cultural survival depends on effective enjoyment of these rights.

Although CEJ is based on various principles and standards that have been established in both international law and national norms, its conceptual clarification and practical application remain pending tasks. Thus, to help fill this void, we concentrate on collective ethnic justice as a criterion for reparation and assignation of territory, land, and natural resource rights in particular. Our aim is threefold: First, from an analytical viewpoint, we seek to give conceptual clarity to the principle, explaining its relationship to other parameters of justice that are relevant to agrarian reform and reparation policies. Second, from a legal and policy viewpoint, we elaborate the implications for transitional justice programs by establishing the standards that should guide reparations for indigenous groups that have been victims of forced displacement and land dispossession. Finally, we seek to provide an idea of how CEJ might look in practice in times of transition or conflict by briefly exploring the ways in which truth commissions and CEJ can be mutually reinforcing.

Indigenous peoples’ conception of the conflict that resulted in the deprivation of their rights may differ significantly from that of the mainstream and dominant sectors of society. For example, indigenous people may view the conflict as extending back to the era of colonization and may not agree with the narrower temporal focus of transitional justice policies, which tend to target a specific period of armed conflict or totalitarian rule. 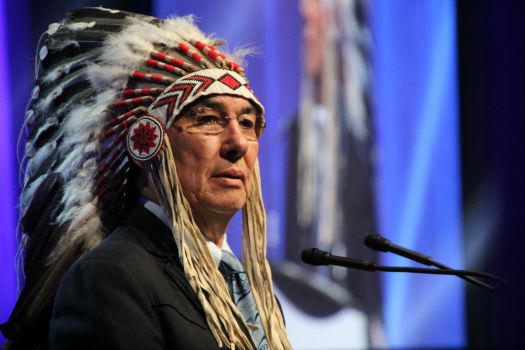 In the past, truth commissions have not made much of a difference on these particular issues, it is true. Perhaps Guatemala’s Commission of Historical Clarification (CEH) is the only one that has made a demonstrable contribution to the participation of indigenous people in public life. The commission’s finding that the state had committed acts of genocide against indigenous peoples helped to reframe political debate in Guatemala, and the struggle for truth and reparations galvanized a range of indigenous groups to become more active politically. The story continues, more than 10 years after the government initially rejected the CEH’s report. In June 2011, a former general in the Guatemalan army was arrested—the first person to be arrested in Guatemala on charges of genocide.

A truth commission cannot lead to self-determination by itself. But it may be part of a longer-term process leading in that direction. In order to contribute, however, they may need to operate a bit differently than in the past. The goal of this paper is to identify some practical recommendations for a truth commission to consider, to contribute to the realization of self-determination and other political rights for indigenous peoples.

In international law, self-determination is defined as the right of all peoples to “freely determine their political status and freely pursue their economic, social, and cultural development.” While recognizing that there is a diversity of opinion within indigenous communities about what form self-determination should take, this paper will focus on claims that do not involve secession from a state. This choice is made due to two simple facts. First, claims for secession are not the dominant ones among indigenous peoples today (although they do exist). And, second, achieving secession, whether for indigenous groups or national minorities, has proved extremely difficult, the recent case of Kosovo notwithstanding. Therefore, the paper will look at a group’s right to freely determine its own development in terms of pursuing that development as part of an existing state.

Political rights refer to the rights of all individuals to participate in decisions that affect their lives, and effective participation will be the focus of this paper. This includes, among other things, voting, membership of a political party, and standing for election. Effective participation is important for other political and civil rights, as well as economic, social, and cultural rights.

Finally, since other authors in this resource deal with cultural rights and land claims, this paper will avoid those topics. However, it must be noted that these issues are intertwined. Claims to self-determination are often deeply linked to land among indigenous peoples, as a special connection with a territory shapes the distinctive identity—as well as the livelihoods—of indigenous groups. Effective participation is often linked to protecting important cultural rights, as well as a community’s capacity to reproduce its culture across generations.