In Colombia, Precedent Is Set for Acknowledging Past Atrocities 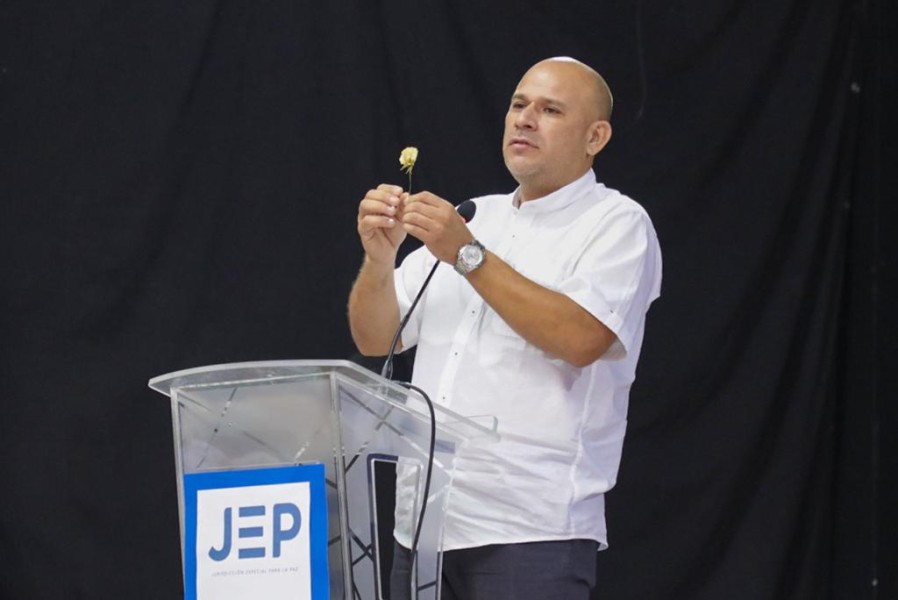 The Final Peace Agreement signed in 2016 between the Revolutionary Armed Forces of Colombia (FARC-EP) guerrillas and the Colombian government created an ambitious and innovative transitional justice system called the Comprehensive System of Truth, Justice, Reparation and Guarantees of Non-Repetition. This System includes judicial and extrajudicial mechanisms to both guarantee the rights of the victims and achieve a stable and lasting peace in the country. The Special Jurisdiction for Peace (JEP) is the judicial mechanism in charge of determining and overseeing the measures to hold to account those responsible for the internal armed conflict and ensure they accept their crimes and answer to the victims and society in general for them.

On April 26 and 27, the JEP held the first public hearing on acknowledging responsibility. It was about case 03 regarding murdered and forcibly disappeared persons presented as casualties in combat by state agents. At the request of the victims, it took place in Ocaña (Norte de Santander), a historically marginalized municipality along the border with Venezuela. This town, which lacks a significant state presence and is known for violence, is where some of the young people from Soacha (a municipality adjacent to Bogotá) were murdered. After being deceived into traveling to Ocaña, these young men were murdered and presented as alleged guerrilla members killed in combat, which earned the officials benefits and positions within the army and police. This horrible practice is otherwise known as “false positives.”

A general, four colonels, five officers and non-commissioned officers of the National Army, and a collaborating civilian acknowledged their responsibility in these war crimes and crimes against humanity, with which the Chamber for the Recognition of Truth and Responsibility charged them. In their respective testimonies, the individuals explained the circumstances in which the crimes were committed and recognized the harm suffered by the victims and their families. In response to the mothers’ demands, the individuals sought to restore the good name of each of the victims, emphatically asserting that they murdered innocent people who had nothing to do with the armed groups. Several victims expressed some relief from their pain upon better understanding what happened to their loved ones. For their part, those appearing before the JEP had the opportunity to understand the different dimensions of the harm they caused and the seriousness of the crimes they committed. For the general public, the hearing shed light on these crimes, not as isolated incidents but as part of a structural problem that has deeply undermined the legitimacy of the Colombian Army. According to the information analyzed by the JEP, at least 6,402 cases of false positives were committed throughout the country between 2002 and 2008.

This hearing represents a major step forward in guaranteeing victims’ rights to truth, justice, reparation, and non-repetition, and it constitutes a precedent in the application of restorative approaches in the criminal prosecution of international crimes. It is the result of a long preparatory process of dialogue between the victims and those testifying, first separately and then jointly, facilitated by an interdisciplinary team from the JEP made up of lawyers, anthropologists, psychologists, and political scientists.

However, this first acknowledgment hearing revealed several challenges. First, although the preparation of the victims and those appearing at the hearing is noteworthy, managing and responding to the expectations of the victims’ families, for whom acknowledgment of responsibility will always be insufficient compared to the magnitude of their loss and pain, remains a challenge.

Second, there is a fine line between justification and explanation. Those appearing at the hearing provided extensive explanations to allow us to understand the motivations behind and objectives of this criminal practice. However, at times, they crossed that fine line and used expressions that were interpreted as justifications, which the victims rejected.

Finally, the hearing demonstrated how difficult it can be to appropriately stage such a hearing, which cannot follow the typical format of a judicial hearing. A hearing of this type involves a live audience and requires the assembly of a stage, a combination of face-to-face and virtual components, the use of cameras, and so on. This in turn creates technical communication challenges for the audience, which may struggle to connect with the messages and the powerful and diverse emotions that inevitably result.

What happens now? The victims and their representatives have 15 days to submit their observations to the hearing. Subsequently, the JEP will determine whether the acknowledgments offered meet the factual, judicial, and restorative criteria required by law. In the following months, other acknowledgment hearings are expected in relation to cases of hostage taking and serious deprivation of liberty committed by FARC-EP.

PHOTO: At the hearing, retired Deputy Sergeant Sandro Pérez shows a flower that the mother of one of the victims gave to him. "I carry this with me to remind me of your son's life," he told her. "There are no excuses or reparations that can fix your loved ones' murders. I will always be ashamed of having committed such inhuman acts." (Special Jurisdiction for Peace)