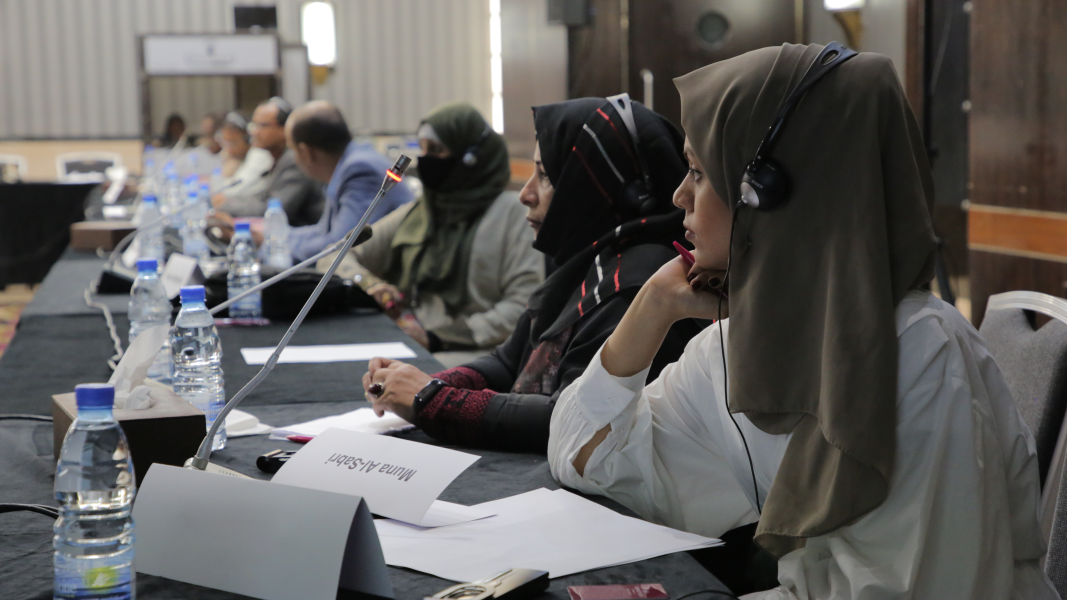 Even as the parties to the war in Yemen fail to extend the UN-brokered ceasefire, field monitors of the National Commission to Investigate Alleged Violations to Human Rights (NCIAVHR) continue to document and investigate human rights violations despite enormous challenges and serious risks to their safety. “The ‘human rights’ label attached to our mission as field monitors is feared by all parties to the armed conflict,” asserted Saleh Abdallah Al Mashreqi, a field monitor and researcher from the Al Bayda governorate. “They see our work as a constant threat since it aims to support victims by documenting the truth about the committed violations.” Saleh was 1 of the 37 NCIAVHR field monitors—representing the country’s 22 governorates—who gathered for a four-day ICTJ-led training on transitional justice from September 5 to September 8 in Beirut, Lebanon.

These field monitors work directly with victims to investigate and document human rights violations perpetrated by all sides in the conflict. “It is extremely important to build a solid ground for any future justice processes in Yemen, and therefore it is essential that ICTJ supports relevant stakeholders, such as human rights groups, civil society actors, in addition to members and field monitors of the NCIAVHR,” stressed Nour El Bejjani, head of ICTJ’s Yemen program.

The training began with an overview of transitional justice and its concepts and mechanisms before diving deeper into topics critical to the field monitors’ work such as best practices for taking statements from victims, digital documentation, dealing with child victims, and outreach and communication. It also addressed the importance of a gender-responsive approaches, mental health and psychosocial support, and reparations.

“The positive thing about this training is the involvement of experts from Arab and African countries that have witnessed conflicts or revolutions,” said Reem El Gantri, head of ICTJ’s Libya program, who led the training’s introductory session on transitional justice. “This was an incentive to share knowledge and challenges experienced in different contexts."

ICTJ’s head of office for The Gambia, Didier Gbery, and ICTJ’s head of office for Tunisia, Salwa El Gantri, led the session on reparations. “We seek to widen the field monitors’ knowledge on reparations to avoid raising expectations and delivering false promises to the conflict’s victims,” asserted Gbery. “ICTJ can play an important role in Yemen, especially in capacity building for field monitors, who despite being very committed, still require organized and accurate communication with victims.”

As stated in its 10th periodic report, the NCIAVHR faces numerous challenges as the human rights situation in Yemen deteriorates. One such challenge is the stigma associated with sexual and gender-based violations and the reluctance of victims to report them. “There are obstacles facing our work, including security risks, as victims fear the repercussions of reporting the violations they have been exposed to due to the perpetrators’ control over the areas where they reside,” said Fayez Saleh Mohammad, a NCIAVHR field monitor and human rights activist from Sanaa governorate, during a session on gender-based violence and gender-sensitive approaches to transitional justice. “The goal was to develop the participants' overall conception of conflict-related sexual and gender-based violence and how to better deal with such cases when they encounter them.” emphasized ICTJ’s El Gantri who chaired the session.

Amal Nassar, an expert in the investigation and accountability of serious international crimes, kickstarted the second day of the training with a session on best practices for statement taking and pursuing redress for victims. The session featured a live simulation of an exemplary interview with a victim, to demonstrate how to deal with victims ethically and interview them effectively in a manner that does not inflict harm. “The focus [of the session] was also on access to justice and reparations, as well as the right of victims and survivors to obtain information on anything related to their rights and interests,” explained Nassar. “The goal was to link the right to full redress with the work of the national commission to lay the ground for future transitional justice processes, and not just criminal justice accountability.”

On the third day, Raja Althaibani, an expert in digital documentation and evidence, led a vibrant hands-on session on using digital technology to document human rights violations. “The session aimed to incorporate digital documentation theories into practice, while understanding the reason behind any documentation, knowing the purpose of every image, and learning how to capture images that are reliable, useful, and easily accessible,” said Althaibani. “It was crucial for the participating field monitors to broaden their knowledge on how to preserve raw material to avoid any alterations to the primary documentation of human rights violations,” she added.

On the fourth and final day of the training, the participants sat down with mental health and psychosocial professional, Sarah Joe Chamate, for an interactive session on the field monitor’s direct relationship with victims and the need for psychosocial support. “It was a great opportunity for the field monitors to sit together and talk about mental health for the first time, and it was enlightening to see how much they need psychosocial support themselves,” Chamate said after the session.

At the end of training, the field monitors received certificates of completion and provided feedback. They were over all pleased with the workshop and expressed eagerness to continue collaborating with ICTJ to advance the commission’s work and support victims and affected communities. “This was the field monitors’ first training on transitional justice, which is a key area of NCIAVHR’s work, and I am confident that the acquired knowledge and skills will be reflected not only in the monitoring, investigation, and documentation processes, but  also in the victims’ demanding of rightful reparations and their general understanding of transitional justice mechanisms” reflected Eshraq Almaqtari, NCIAVHR’s spokesperson.

ICTJ will build on this training and continue to work closely with NCIAVHR’s field monitors to reinforce their knowledge of transitional justice, apply it in their work, and help lay the groundwork for transitional justice processes in Yemen. “Strengthening the skills and capacities of human rights monitors deployed across Yemen is crucial to keep shedding light on war crimes and large-scale human rights violations committed by all parties,” said El Bejjani. “It is also critical to future accountability efforts in Yemen, where victims and their rights to justice have been significantly sidelined.”