ICTJ Organizes U.S. Visit for Syrian Advocates for the Detained and Disappeared

As part of its ongoing efforts to support Syrian civil society organizations seeking to end enforced disappearances in Syria, ICTJ organized a visit to the United States for members of two prominent family associations: Families for Freedom and the Caesar Families Association. The trip, which was planned in coordination with longtime partner Dawlaty, comes at a time when Syrian civil society and victims’ groups have been intensifying their calls for an international mechanism to uncover the fate of those who have gone missing in Syria since the start of the uprising in March 2011. 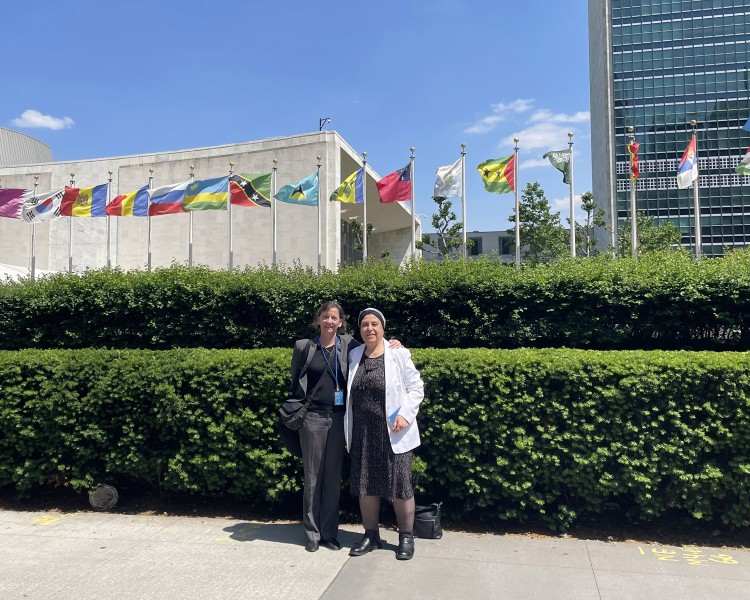 As part of its ongoing efforts to support Syrian civil society organizations seeking to end enforced disappearances in Syria, ICTJ organized a visit to the United States for members of two prominent family associations: Families for Freedom and the Caesar Families Association. The trip, which was planned in coordination with longtime partner Dawlaty, comes at a time when Syrian civil society and victims’ groups have been intensifying their calls for an international mechanism to uncover the fate of those who have gone missing in Syria since the start of the uprising in March 2011.

Amina Khoulani, founding member and the coordinator of Families for Freedom, and Mariam al-Hallak, founding member of the Caesar Families Association, traveled to Washington, DC, and New York City to meet with government officials, diplomats, representatives of international organizations, and policy experts. At the U.S. State Department, they met with Deputy Assistant Secretary for the Bureau of Near Eastern Affairs Ethan Goldrich and Deputy Assistant Secretary for the Bureau of Democracy, Human Rights, and Labor Christopher Le Mon. They also met with experts from the United States Institute of Peace, the Middle East Institute, and the Center for Strategic International Studies; diplomats from the United Kingdom, France, Spain, Turkey, and Qatar; and officials at the United Nations, including Assistant Secretary-General for the Middle East, Asia, and the Pacific Mohamed Khaled Khiari.

In the meetings, Khoulani and al-Hallak had a very clear message: “We want the truth about our loved ones and those of tens of thousands of Syrian families.” Both women are all too familiar with the suffering of the families whose loved ones have been detained or forcibly disappeared in Syria.

A long-time civil society activist, Khoulani was detained for six months by Syrian authorities, while her husband was incarcerated for two and a half years at the notorious Saydnaya Prison. They survived, but her three brothers died in detention. Koulani fled Syria in 2014 and later sought refuge in the United Kingdom with her family. In 2017, she and other women family members of the detained and disappeared launched Families for Freedom. In 2020, she received the International Woman of Courage Award from the U.S. Secretary of State.

Al-Hallak is a former educator. Her son, Ayham, was detained in 2013 and killed under torture only 10 days later. Al-Hallak later learned about her son’s death from the notorious photos of torture victims smuggled out of Syria by a Syrian military photographer known as Caesar in 2014. In 2018, she met with families who similarly lost loved ones, and together they created the Caesar Families Association to campaign for justice for the detained and disappeared in Syria.

Their organizations are advocating for the UN to establish an independent international mechanism with a humanitarian mandate to clarify the fate of Syria’s detained without linking this issue to other political or accountability objectives. In 2021, five family associations came together to launch the Truth and Justice Charter, which lays out a shared vision and framework for addressing enforced disappearances and arbitrary detentions in Syria. According to the charter, such a mechanism would serve as a central repository for all data on Syria’s missing and as a one-stop shop for families to obtain information about their loved ones.

The calls for a mechanism have gained significant support in the international community. Recently, the UN General Assembly tasked the Office of the High commissioner for Human Rights (OHCHR) with producing a report on “how to bolster efforts to clarify the fate and whereabouts of missing people in the Syrian Arab Republic, identify human remains and provide support to their families.” In preparing the report, OHCHR has held a series of consultations with civil society, victims’ groups, families’ associations, and governments.

The trip to the United States also took place against the backdrop of the recent revelations of the Tadamon massacre. In April 2022, leaked video footage surfaced showing scenes from a massacre in the Tadamon neighborhood in Damascus in 2013 in which 41 civilians were murdered. In the video, soldiers affiliated with Syrian army, specifically Branch 227 of the Military Intelligence Division, led blindfolded detainees one by one to the edge of a pit and shot them. Soldiers’ laughter could be heard in the background. Much like when the Caesar photos emerged, families of the detained scoured the gruesome footage to see if their loved ones were among those killed. Such blatant violations of basic human rights by the Assad regime are commonplace in Syria’s official, unofficial, and makeshift detention centers. The Syrian government must disclose the locations of all these centers, give the International Committee of the Red Cross access to them, allow family members to visit their loved ones held there, and establish a timetable for their release. 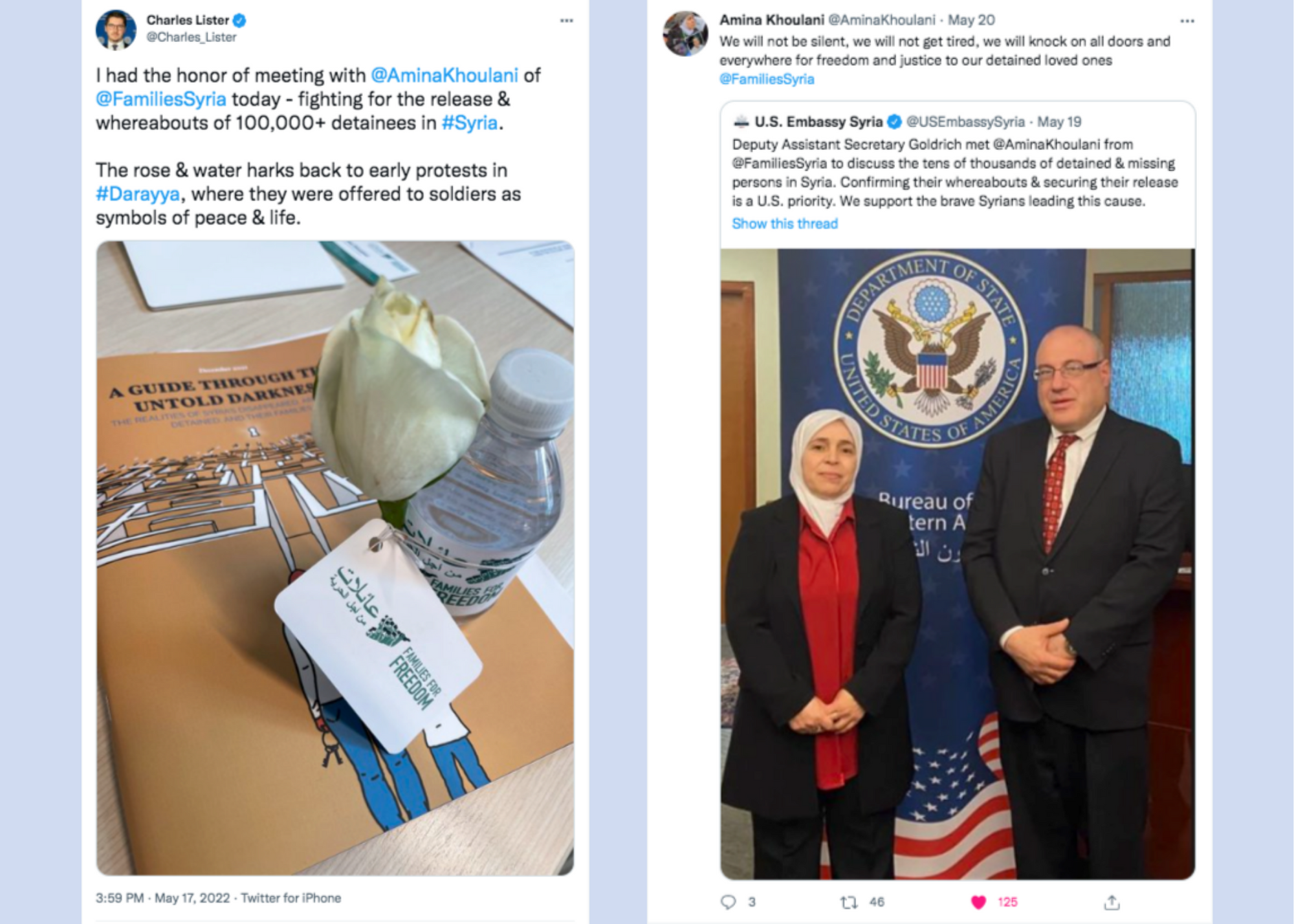 Following the release of the video, President Assad swiftly responded, issuing a presidential decree pardoning detainees convicted of non-fatal “terrorist crimes.” In theory, the pardon applies to some of the peaceful demonstrators, political opponents, and human rights activists who were convicted under the 2012 counter-terrorism law, many of whom have been held incommunicado for over a decade. Although the amnesty does not cover all political detainees, it initially offered some welcome news to the tens of thousands of families of the disappeared and arbitrarily detained. The families, survivors, and victims’ advocates had hoped that the amnesty would be the first step in a larger process that would lead to the immediate release of the many vulnerable detainees being held in notoriously dire conditions, as well as the release of individuals serving sentences for nonviolent offenses related to the exercise of their civil and political rights. Unfortunately, the implementation of the amnesty has been limited, poorly handled, and has caused immense harm to families.

Shortly after the decree was issued, thousands of family members of those detained since the 2011 uprising went to the governorate buildings in Damascus, Homs, Hamah, and other major cities to ask about their relatives. Invariably, they got no answers to their questions. Meanwhile, military trucks would periodically drop off dozens of detainees at major street intersections without notice or coordination. Hundreds of families soon began camping out on the streets, often for days, waiting for one of those trucks to arrive. When one did, military officers would push the families away from the truck for hundreds of meters before leaving detainees on the side of the road.

“Assad wanted to tell Syrians that he is still the one in control of their lives. He kidnapped their loved ones and tortured them, and then made their families sleep in the street for days for the hope of their release,” Khoulani explained to U.S. policymakers. “He then sent his media outlets to show that humiliation on national TV before releasing some detainees as if they are releasing animals in the middle of the street.”

To date, the Syrian authorities have only released about 527 prisoners. The government has also given no timetable for future releases, including for political detainees, nor has it provided any additional information to families about the status and location of the estimated 149,360 individuals detained since 2011, or those who have been held under emergency laws dating back to 1963.  Instead, the entire process has been marked by an utter lack of transparency and disregard for families’ rights to know the truth about the fate and whereabouts of their loved ones. The few people who were released are exhibiting signs of extreme physical frailness, mental illness, and trauma, most likely caused by years of inhumane treatment, torture, and neglect. Their struggle is a stark reminder of the urgent need for action to help them and those still held incommunicado.