Brazil Shatters Its Wall of Silence on the Past

Brazil’s recent decision to examine the abuses of the military dictatorship from several decades ago could change the face of democracy at home, making it more genuine and transparent. At the same time it could have a wider impact, allowing Brazil to take a decisive stand on human rights regionally and internationally. 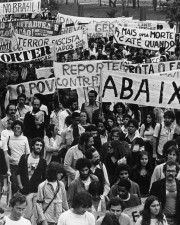 Brazil’s recent decision to examine the abuses of the military dictatorship from several decades ago could change the face of democracy at home, making it more genuine and transparent. At the same time it could have a wider impact, allowing Brazil to take a decisive stand on human rights regionally and internationally.

In a momentous step forward, President Dilma Rousseff has signed two laws: one on access to government information, and another establishing a national truth commission, modeled after similar experiences in Latin America.

Authorizing inquiries on government abuse breaks with a long-standing tradition of government secrecy and elite opacity. Even today, Brazil refuses to declassify archives related to 19th century foreign wars and internal repression. After the end of slavery in the 1890s, Brazil incinerated all governmental archives on the practice; whether to hinder compensation claims by slave owners or to hide a shaming period in history, it is impossible to know with certainty.

The worse episodes of state violence in the 20th century also remain shrouded in official silence, chief among them are the crimes committed by Brazil’s military dictatorship, which ran a system of torture and selective assassinations from 1964 to 1985. During those years Brazil was the regional model for regimes led by the military, rather than by individual caudillos, or leaders, and Brazilian ideologues systematized the “Doctrine of National Security” that would provide the intellectual basis for military regimes all over Latin America.

The dictatorship was responsible for the exile and torture of thousands of Brazilians, as well as hundreds of forced disappearances and arbitrary executions. Some compare these numbers with atrocities in neighboring Argentina or Central America and conclude that Brazil’s strongmen were somehow mild. That is an immoral and misleading arithmetic that minimizes the suffering of the regime’s victims and ignores the long term impact on the society.

Unlike its neighbors in South America, who have confronted the legacy of military rule, Brazil has never conducted prosecutions or provided an official account of the crimes. A blanket amnesty granted by the military government is still in force, shielding torturers. The reason for this anomaly is that the Brazilian military also led the pack with its skill in managing what its leaders called a “slow, gradual, and safe” transition to civilian rule while simultaneously protecting their privileges.

The result, however, is that Brazil now lags in comparison with all its neighbors in the examination of the past and the upholding of victims’ rights to truth and justice. This weakens the Brazilian voice in the international arena with respect to the critical field of human rights protection.

Now, with a truth commission and a legal framework to open governmental records, it is possible that the country will start to break the wall of silence that forbids Brazilians from knowing their own history, and that Brazil will gain redoubled authority to advocate for human rights.

There will be serious difficulties though, chief among them are the amnesty law and the persistent denial or justification by the military and extreme right-wing politicians of their actions during the years of dictatorship. It will be up to President Rousseff, herself a victim of torture during the dictatorship, to stand up for the effective implementation of the access-to-information law and for the creation of a truly independent truth commission. In doing so she will send a strong moral message, like Michelle Bachelet of Chile, Nelson Mandela of South Africa, and other leaders who managed to open the gates of a troubled past in search of reconciliation.

*Eduardo Gonzalez is the director of Truth and Memory Program at the International Center for Transitional Justice.

A version of this op-ed appeared in print on December 3, 2011, in The International Herald Tribune with the headline: Brazil Shatters Its Wall of Silence.