Charles Taylor Verdict and West Africa: Not Even Half the Story

The conviction of former Liberian president Charles Taylor for crimes against humanity and war crimes committed in neighboring Sierra Leone finds both West African countries and the region grappling with his terrible legacy. And while the people, and especially Taylor’s victims, in Sierra Leone welcome it as an important step in the country’s effort to overcome the consequences of the brutal civil war, Liberians are still a long way from seeing accountability for the suffering they endured. 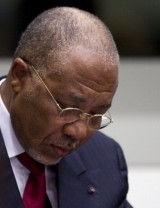 The conviction of former Liberian president Charles Taylor for crimes against humanity and war crimes committed in neighboring Sierra Leone finds both West African countries and the region grappling with his terrible legacy. And while the people, and especially Taylor’s victims, in Sierra Leone welcome it as an important step in the country’s effort to overcome the consequences of the brutal civil war, Liberians are still a long way from seeing accountability for the suffering they endured. The judgment on Taylor is a chance to shine the light on this reality; we should not let the celebrations of the verdict obscure it.

We must note the great importance of the judgment for the region and the global struggle against impunity. Slowly but surely a coherent and credible message is building that world leaders can no longer hide behind secret deals and handshakes. Taylor joins the growing list of heads of state that have been brought to justice for their atrocities, the first to be convicted by an international court.

Taylor is largely responsible for starting the conflict that engulfed Sierra Leone from 1991 to 2002, where he actively supported Foday Sankoh’s Revolutionary United Front (RUF) rebels engaged in a brutal effort to overthrow the government of Sierra Leone. The crimes the RUF inflicted on their fellow countrymen were gruesome by any standards—thousands were killed, raped, and mutilated, children forcibly recruited to fight and commit atrocities on behalf of Sankoh and Taylor. Sankoh died while in the custody of the Special Court for Sierra Leone (SCSL) but Taylor did not manage to escape justice for his role in Sierra Leone’s civil war.

In March 2003 he was indicted by the SCSL on 11 counts of crimes against humanity and war crimes. The story of his arrest and trial, following his exile to Nigeria, resembles a spy thriller. He was arrested in 2006 at a border checkpoint while trying to flee incognito and transferred first to Freetown and then to The Hague, where proceedings were moved for security reasons. His four-year trial has featured a cast of characters rarely seen in international justice, including Naomi Campbell and Mia Farrow.

The guilty verdict for planning and aiding RUF’s crimes is welcomed by many in Sierra Leone, who believe that without Taylor in power in Liberia there would not have been a civil war. "Now that Charles Taylor is out of the way, we can easily and safely say that with his absence we are beginning to enjoy peace without having to look over our shoulders," stated Information Minister Ibrahim Ben Kargbo in a recent interview.


Across the border the Liberian government has demonstrated a complex and not always convincing approach to the pursuit of justice on behalf of Taylor’s victims—or the victims of a series of bloody wars that date back to at least 1979. In a 2009 report, the Liberian Truth and Reconciliation Commission (TRC) estimated that over 250,000 people were killed in the country between 1979 and 2003. The TRC recommended more than 100 people for prosecution and an additional 49 to be barred from holding political office for their role in the conflicts, including the current president. The report is not without its flaws and few experts would recommend implementing all its recommendations, but not enough has been done to respond to many of the genuine issues raised by the commission. Liberian authorities have not yet prosecuted anyone for these crimes and many of Taylor’s supporters, including some closely involved (both financially and militarily) in the conflicts, now occupy senior positions in government.

Charles Taylor’s verdict forces us to ask deeper questions about what we expect from judicial processes. It does not—and nor was it intended to—address his countless victims in Liberia. Most important, the decision can do little to directly help restore the vital element of trust needed between the citizens of Liberia and their state institutions.

Even in the context of the economic downturn, Liberia’s recent growth figures are impressive (projected to be almost nine percent in 2012); it has a relatively diverse basket of exports aided by the current rise in commodity prices. Debt relief of some $4.6 billion and financial management reform help paint a positive picture. But the fragile security situation remains a threat to Liberia’s development. The country is bordered by Sierra Leone, Côte d'Ivoire, and Guinea. The last two of these, if not bad neighbors, are far from stable. Nationally, Liberia’s institutional infrastructure remains perilously weak. The threats to law and order and constitutional government have not disappeared. As the World Bank noted in its World Development Report of last year, development after democratic crisis needs justice and accountability to help rebuild trust in democracy and the rule of law.

Ellen Johnson Sirleaf understandably wants to see her country respond to the horrors of the past in a way that makes sense for Liberians. She seems to appreciate that pretending the past did not happen is not an option and is a strong supporter of the Liberian Reconciliation Initiative led by Nobel Peace Prize laureate Leymah Gbowee. This is positive, but it is not enough to address the accountability vacuum that clearly exists and prevents Liberia from achieving stability.

There remains a need to address the legitimate calls of Taylor’s Liberian victims for justice at home, and as importantly, to recognize that faith in the national justice system is impossible without a genuine effort to show the institutions that failed in the past can now be trusted to bring justice when it matters.

Liberia’s steps to establish accountability will not be swift, but hopefully they will be sure. A more immediate impact of the verdict will be felt in the region. Several West African countries remain fertile ground for conflict and repression. Justice and accountability efforts for countless victims in Guinea, Côte d'Ivoire, Chad, and Togo have all fallen short. Taylor is an example of a past that most want to put behind them, but this will only happen if accountability plays its proper part in building a stronger social contract between citizens and state. The question is not whether or not to deal with the past in Liberia and the region, but how to do so in a way that will make citizens truly believe that the past is really behind them.

Photo: Former Liberian President Charles Taylor at the judgement hearing of his trial April 26, 2012 at the Special Court for Sierra Leone. PETER DEJONG/AFP/GettyImages.

Article originally appeared in The Independent.