In Colombia, Women Affected by Conflict are Agents of Social Change

Recent developments in the country are challenging the taboos of publicly acknowledging sexual violence and paving the way to addressing the impact of conflict on women. Steadily, a broader conversation on a gender-sensitive approach to truth and accountability is burgeoning in Colombia, as well as on promoting women’s active participation in decision-making processes to redress victims of human rights violations. 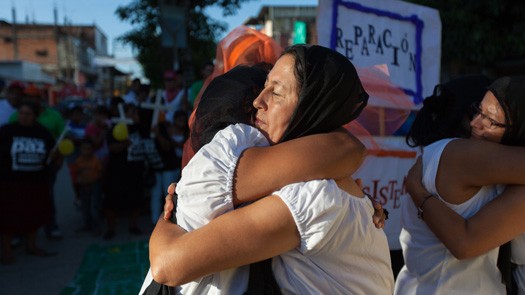 During 50 years of armed conflict in Colombia, sexual violence has been a widespread yet silenced practice that has enjoyed the highest levels of impunity.

Even the country’s Constitutional Court has ruled that sexual violence committed against women –including sexual abuse and exploitation– is a “habitual, extended, systematic and invisible practice in the Colombian armed conflict.” However, these crimes are still extremely underreported, by victims: According to a study conducted by Oxfam, between 2001 and 2009 less than 18% of women reported incidents of sexual violence in Colombia. Of those reported cases, only two in 100 are likely to result in a sentence, which leaves an impunity rate of more than 98%. Also telling is the Justice and Peace process, in which demobilized paramilitary members were offered reduced sentences if they confessed to their crimes: of the 39,546 acts confessed, only 96 were related to sexual violence, which shows the lack of acknowledgment of sexual violence as a serious crime by perpetrators.

Nevertheless, recent developments in the country are challenging the taboos of publicly acknowledging sexual violence and paving the way to addressing the impact of conflict on women. Steadily, a broader conversation on a gender-sensitive approach to truth and accountability is burgeoning in Colombia, as well as on promoting women’s active participation in decision-making processes to redress victims of human rights violations.

The new law also calls for the inclusion of detailed information on sexual violence in the Unified Registry System of violence against women, and it recognizes other acts of sexual violence besides rape, such as forced enslavement, forced sterilization, forced pregnancy, forced nudity, and human trafficking.

“It’s a promising law because it recognizes additional sexual violence crimes including forced prostitution and forced abortion, and addresses existing gaps regarding gender-sensitive approaches to accountability such as protection measures, medical and psychosocial assistance, monitoring mechanisms, and institutional coordination,” said Amrita Kapur, Senior Associate with ICTJ’s Gender Justice program. “But only by ensuring its effective implementation will the country be able to end ongoing impunity for these crimes.”

The Challenge of Implementation

It is uncertain how effective the law will be in ensuring accountability and justice for victims.


The task of seeking justice for crimes of sexual violence is even more daunting when the broader reality of women’s security in Colombia is taken into account: because of the conflict and the culture of impunity it has helped to perpetuate, women are also killed, tortured, threatened, forcibly disappeared, arbitrarily detained, kidnapped and displaced.

Afro-Colombian and indigenous women are among the most affected populations. In addition to the humiliation and violence they suffer due to their gender, they are also subject to the ongoing racial and cultural discrimination towards their communities that dates back centuries. In these populations, where women play a central role in the spiritual life of the community, violence against these women is not just a matter of individual harm—it threatens the culture itself.

“One of the major tasks ahead to achieve peace in Colombia is to adequately and comprehensively address women’s issues, and to adopt approaches that can address the needs of different groups of women that have suffered intensely because of the conflict,” said Maria Camila Moreno, director of ICTJ’s program in Colombia.

Women as Agents of Change

Despite the horrific violence waged against them and intense suffering so many women in Colombia have endured, these women have shown that they are not only victims: they are also agents of social change, and are leading activists for justice and reform.

In a country where female leaders are constantly targeted for speaking out on these issues, they have nevertheless worked fiercely to shed light on how the conflict has distinctly impacted women and stressed the need to address underlying gender inequalities.

For the past two years, ICTJ and the Colombia-based organization La Casa de la Mujer have worked together to promote the inclusion of women in decision-making processes to address conflict-related harms, as well as to make sure women’s experiences of war are represented at the peace negotiations between the government and the FARC rebels.

“Regarding the fact that women represent half of the victims of the armed conflict, and that they experience differentiated violence patterns, the participation of women is essential for their experiences and proposals to be known, and for them to influence the implementation of public policies that affect them,” said Ana Cristina Portilla, gender justice expert of ICTJ’s Bogotá office.

La Casa de la Mujer and ICTJ have worked on improving the participation of victims within the current legal framework, identifying the economic, social, political, cultural, and institutional barriers that impede women to fulfill their right to participate, as well as their right to truth, justice, and reparation. The conclusions of the report are drawn from interviews conducted with victims, social workers, and managers of public institutions dealing with reparations in the Cesar and Meta regions, as well as in Bogotá city.

Some of ICTJ’s recommendations to the relevant state institutions include to provide more effective and comprehensive security measures for victims and their leaders; to properly train staff in charge of implementing the Victims’ Law on the ground; to teach women about their rights and ways they can better participate in decision-making processes to redress victims of human rights violations; and to design mechanisms to address the socio-economic factors that challenge women’s participation, like for example providing food or temporary child-care services during meetings, among others.

Despite the great impunity that still reigns over gender abuses related to the conflict in Colombia, the country –pressured by civil society groups– is starting to listen to the voices of women that have gone ignored for far too long, and to acknowledge them not only as victims, but also as agents of social change.

Learn more about ICTJ's work on gender justice and the developments we'll be following closely this year.

Photo: Members of women's association Asmum, part of La Ruta Pacífica de las Mujeres, hug each other after a demonstration to claim for women's right to truth and justice in the Putumayo region, Colombia. (Camilo Aldana/ICTJ)