In a conversation dedicated to the International Day of the Disappeared, Eduardo Gonzalez, director of ICTJ’s Truth and Memory Program talks to Jose Pablo Baraybar, director of the Peruvian Forensic Anthropology Team. Gonzalez and Baraybar explore why it is crucial for societies in transition to address the issue of the disappeared, the tension between demands of conventional justice and the right to truth, and the need for a strategy in searching for the disappeared. 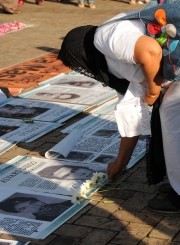 The International Day of the Disappeared, marked August 30, drew attention to the plight of hundreds of thousands of families of missing persons from different countries spanning the globe. From Colombia to Sri Lanka, from Bosnia and Herzegovina to Nepal, from Syria to Peru, families of people who disappeared in circumstances of conflict or repression suffer greatly as they fight to find out what happened to their loved ones.

The impact of disappearances on the families is devastating and long lasting, leaving them in a terrible limbo, unable to find closure. At the same time, it reaches beyond the immediate communities of the disappeared, affecting entire societies grappling with the legacy of unresolved crimes and the obligation to provide families with the truth about the fate of their loved ones.

In a conversation dedicated to the International Day of the Disappeared, Eduardo Gonzalez, director of ICTJ’s Truth and Memory Program talks to Jose Pablo Baraybar, director of the Peruvian Forensic Anthropology Team and a renowned international expert whose work in forensic anthropology has been instrumental in determining the truth about crimes around the world, including Peru, Haiti, former Yugoslavia and Rwanda. Gonzalez and Baraybar explore why it is crucial for societies in transition to address the issue of the disappeared, the tension between demands of conventional justice and the right to truth, and the need for a strategy in searching for the disappeared.

GONZALEZ: Any look at transitional justice scenarios around the world now shows how urgent it is to locate and identify the remains of missing and disappeared persons. In some cases, the search for these people takes decades, well beyond the period of repression or war. Why is the question of the missing and the disappeared so important to address for post-conflict societies or societies trying to extricate themselves from authoritarian regimes?

BARAYBAR: The issue of the disappeared is very complicated, and because of this it has often been put second to other transitional justice considerations.

It’s crucial to address this question though because it’s very difficult for individuals and a society to turn the page and have some sort of closure without knowing what happened to their loved ones. People have the right to the truth and they need to know what actually happened to allow for some closure to take place.

In the past we have tried to believe people would be able to go on without knowing. Families in France are still looking for the dead from the First World War in 1914–1918. Many of the missing are known to be buried in the fields of Verdun, and the government said: “We know what happened and we know where the dead are; let’s not look at the past.” It is very easy for the state to forget on behalf of others. But people want to have the remains of their loved ones buried as human beings, not just sharing a field with some thousands of others.

This issue of not knowing then becomes inherited generation after generation. People want to know where they come from or what actually happened to them to build their own history; the grandson would like to know what happened to his grandfather. And when closure does not take place at the family level or community level, it will not take place at the country level. Then reconciliation is pretty much an enigma or outright impossible.

GONZALEZ: It sounds like if political elites seem content to ask the families to draw solace from a political discourse: “Your children fell for the fatherland” or “Let’s move toward the future; let’s not look at the past.” In some cases it looks like a reiteration of “Antigone” where King Creon is angry with Antigone because she defies him, because she continues to ask for the most elementary right—to know what happened and to make sure that her brother is given the rituals that are granted to all the dead.

BARAYBAR: At the end of the day memory is a challenge; through memory you are challenging a number of established things and the established order. I think it is very easy to forget on behalf of others. But is very difficult for you to forget, because even if this is very much cliché, knowing actually where you come from, or what happened to you and your forebears for that matter, you will be able to have much more clarity about where you are going to.

Memory can also be a challenge to the state authority. It is very difficult when a state imposes some form of official story and says: “This is the memory. This is the way you will remember what happened from now on,” because those who experienced conflict or abuses often have a very different memory. And by having this different memory they will always be defiant of whatever is presented as the “truth.”

GONZALEZ: You mentioned earlier the concept of the right to the truth, a concept you don’t find in the Universal Declaration of Human Rights. What is this right to truth? How would you define the fact that this is a right, on the basis of your own experience? And if this is a right, then what obligations does it impose on the state?

BARAYBAR: To put it in simple terms, every individual has a basic right of knowing what happened to their relative or relatives. No one should be left in the dark by someone saying “well, your relative simply vanished.” The right to know is an appropriate response. Nobody simply disappears.

This is quite overlooked because we tend to believe that justice in itself is a truth provider. But the judicial process is a series of arguments that articulate a version of the truth that is enough to reach an acceptable threshold of justice. We as relatives, as individuals, as human beings need other answers; what actually happened when this person met death.

This kind of right is very intangible. It is very difficult for this set of truths to be written down somewhere or listed or prescribed in any kind of judicial ruling. Sentences by international institutions like the Inter-American Court of Human Rights have been recommending more and more to exhaust all means to find out exactly what happened, but I think the right to know is something that embodies all these kind of recommendations into a much more specific set of rights beyond the workings of the courts.

BARAYBAR: The burden of proof for a crime is totally different than the burden of truth; you need to know what actually happened and bring closure to a family. Those are two different things.

Any restorative approach cannot be based on the retributive justice in the classical sense. Justice in the classical sense is also a social construct and a social good. It is something that has repercussions in society as a whole. You punish somebody to set an example and also to prevent things from happening to society, not to individuals alone. There isn’t much restoration. I would say the right to know is very restorative in that respect.

A good example of this is cases of disappearances that have been sentenced and the accused have gone to jail, but the body has not appeared. The Inter-American Court of Human Rights case of “Castillo Páez v. Peru” is closed and police officers went to jail, but the body of Ernesto Castillo Páez has not been found. And although the court recommended the state do everything in its power to find the remains, the ones who know where they may be—the officers in jail—have no incentive to provide information because they are already paying for the crime they committed.

So there are two distinct rights here—the right to justice and the right to know—only one of which was fulfilled by the trial.

GONZALEZ: The Ernesto Castillo case is a very important one to me; Ernesto was a good friend of mine. When I think of him more than 20 years after his disappearance, I think on the one side that the struggle of his family and the human rights community to achieve justice on his case has given us positive jurisprudence in the Inter-American Court of Human Rights and in Peruvian courts.

But on the other hand, that is little consolation for friends and family because we do not know where Ernesto is. Why is it not possible once the perpetrators have been convicted, for prosecutors or the judicial system to grant some kind of incentive to these people to cooperate in the search of these bodies?

BARAYBAR: Well if they do such a thing in every other aspect of criminal justice, I don’t see why it should not be done in this case. But it is easier to engage in retributive practice of criminal justice rather than combining it with restorative justice that may include more imaginative or more liberal policies, such as incentives. These policies are not established; we have not yet taken this leap forward in thinking how we find harmony between the needs of families and the needs of the system in order to bring both justice and truth to the families. That is the challenge.

GONZALEZ: It’s been 8 years since the Peruvian Truth and Reconciliation Commission (TRC) issued its final report in which the commission identified about 4,000 possible places for gravesites with the bodies of the disappeared, and authoritative investigations—including the work of your institution, the Peruvian Forensic Anthropology Team—indicates that about 15,000 Peruvians continue to be missing or disappeared. Yet the Peruvian authorities have failed completely to look into these cases. What is needed in Peru to comply with the victims’ right to know? What do you expect from the new Peruvian administration?

BARAYBAR: The lesson being learned in Peru is not different than many other countries in the region: we took the easiest of the recommendations of the truth commission on board—such as reparations—and avoided the most complex issue: establishing a strategy for accounting for the disappeared.

What is needed in Peru as in many other places is a search strategy. We are lacking a search strategy—one of the recommendations of the truth commission was to create an office of the missing persons—understanding that the task of devising such a strategy is a complex thing. It is not a matter of exhuming bodies; that can be done by anybody. Exhuming is easy; restituting identity is very complex.

Photo: A mother places a carnation on the image of her missing son during a commemoration of the International Day of the Disappeared in Colombia, 2011. Photo by Ronald Dueñas