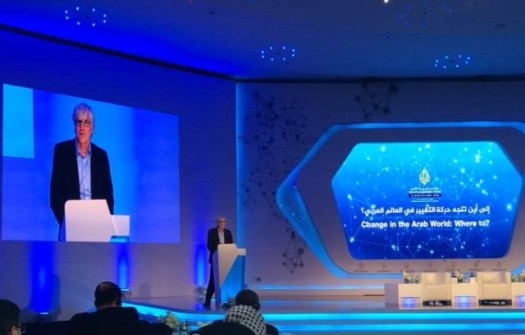 Three years after the so-called the “Arab Spring,” the post-revolution era has so far been marked by a mix of hope and hardships. While some countries in the region have managed to set foot on the right path towards transition, others have relapsed into a pre-uprising state of affairs, or even worse, into ruthless slaughter and rampant impunity.

This uncertainty about the fate of transitions in the region was the impetus for Al Jazeera’s 8th Annual Forum, held from March 26-28, 2014, in Doha, Qatar. Bringing together hundreds politicians, academicians, scholars, journalists, youth activists, and civil society organizations from over 40 countries, the Forum critically examined the progress of Arab countries in their efforts to transition towards democracy, justice, and the rule of law.

Tolbert’s address on transitional justice followed that of the Syrian Interim Prime Minister Ahmed Tomeh, who presented the developments in Syria since the peaceful uprising took place in 2011.

To the audience at the Al Jazeera Forum, Tolbert began by remarking that the conversation taking place was a most urgent one: “This subject is of utmost import, as the lives and well-being of many millions are at stake,” he said.

Tolbert pointed out that when states fail to protect the rights of their citizens or are themselves involved in violating those rights, democratic transitions cannot be simplified to holding elections: a broader approach to reckoning with the past is essential, and should often include formal or informal truth-seeking initiatives, criminal accountability, reparations for victims, and the reform of key institutions, including the judiciary and security sectors.

From ICTJ’s experience in many countries around the world, countries that have employed truth and justice processes as key elements in their transition—including those that emerged from authoritarian regimes, such as Latin American countries, and others that surfaced following armed conflicts, as the case of states in Eastern Europe and Africa—show that these are long-term process.

“These efforts are often multi-generational, and take a commitment to ensure that ultimately the truth about the past becomes a part of the national curriculum,” said Tolbert. “Proponents of transitional justice must ensure that they plant the right seeds—and I have argued today that transitional justice is one viable way of doing that—so that years from now their children may live in a more just and egalitarian society.”

As a part of the Forum, Mr. Tolbert also participated in two workshop panels, titled “Paving the paths for Social Change: The Role of Media and Human Rights in Crisis.”

What Went Wrong in the Middle East and North Africa?

In his address to the Al Jazeera Forum, Mr. Tolbert argued that the central obstacle to transitions in the Middle East and North African region is the ongoing lack of accountability measures that addresses abuses of the past, the same impunity which comprised a root cause for the uprisings in the first place. Said Tolbert, “Accountability is actively resisted—to varying degrees—by powerful political players in Egypt, Libya, Yemen, and, most obviously, Syria.”

Most resistance to investigations and prosecutions for crimes of the past are those in power— either financial, political or both—and their influence often overpowers efforts of justice.

To face this challenge, mechanisms dealing with systematic violations should only be established through extensive consultation with the public and civil society organizations. However, this type of consultation, says Tolbert, was notably absent as countries of Yemen, Libya and Egypt attempted to enact mechanisms to address the past.

“When resources are not secured and the goals and priorities are not clearly established during the conceptual phase of the process, the ad hoc measures that are established inevitably result in stakeholder fatigue,” said Tolbert.

Aside from general resources and political willingness, Tolbert asserted that the countries in the region face four specific obstacles to transitions: political isolation, legislation, prosecutions, and reparations.

“Egypt, Tunisia, and Libya have sought to pass isolation laws to side-line individuals based on affiliation rather than individual conduct, thus violating fundamental concepts of due process,” he said. In contrast, Yemen instead proposed a constitutional clause on political isolation; if ratified, it would affect those protected by the immunity law as it will force them to choose between participation in politics or preserving their immunity.

As for transitional justice legislation, Mr. Tolbert considered this process to be “improvisational” in each of Tunisia, Yemen, Libya and Egypt. He cited the failures in Egypt, especially, to move forward with concrete proposals due to severe political and social turbulence that accompanied sudden shifts in executive power over the past three years.

Efforts to investigate and prosecute individuals for massive human rights violations however, have gained even less traction. He pointed to the immunity law that was passed in Yemen, which prevented accountability for human rights abuses committed by President Saleh and his associates. Despite the prosecutions of high-ranking officials took place in Tunisia and Egypt, transitional authorities in both countries initiated rushed legal proceedings against the two former heads of state.

“Neither demonstrated a willingness to enlist criminal justice mechanisms in affirming the rule of law or a break from past practices. Such practices have rendered trust in the impartiality of the national judiciary non-existent.”

Reparations and redress for victims has also fallen short and so far been unable to provide the uprising countries under examination have granted monetary compensation, but according to Mr. Tolbert, reparative justice in its wider scope was far from perfect with the lack of “acknowledgment or social, medical and other kinds of support” that the victims “so deeply desire and deserve.”

Tolbert, closed his speech remarking the crucial role that media plays in transitional justice. According to him, journalists share the responsibility in identifying and documenting human rights abuses and those involved.

“Media can be essential in explaining transitional justice concepts and measures that may appear intricate to the public, but are fundamentally about the basic desire for truth about the past, and justice for the architects of human suffering and corruption that so many countries in the MENA region experienced,” said Tolbert. “Media helps both victims and civil society to communicate their voices across to both, the society and the government.”

A Light for the Region: The Case of Tunisia

In contrast, the Tunisian stands out in the Arab world when it comes to holding perpetrators accountable for serious human rights violations: Tunisia distinguished itself from the others in the region by initiating extensive consultations on transitional justice, followed by the creation of a technical committee tasked with drafting a transitional justice law that was passed in December 2013.

“While lacking in certain specific respects, the passage of Tunisia’s Transitional Justice Law constitutes a breakthrough,” said Tolbert. “It ensures that transitional justice remains a guiding component of the country’s transition.”

Among the highlights of the law is the establishment of a truth commission, specialized judicial Chambers on human rights, and a reparations program. This, said Tolbert, “gives advocates a foothold that can provide them additional opportunities to seek redress for the violations of the past.”