Lebanon: Education in a Context of State-Imposed Amnesia

While Lebanon is post-peace agreement, it is not necessarily "post-conflict." The country struggles to address the legacy of decades of violence, and the lack of a comprehensive approach to dealing with the past means the country's youth are growing up with scant knowledge of their history. But they want to know more: one project is helping them ask those around them about the past, and giving those who lived it a chance to tell their stories. 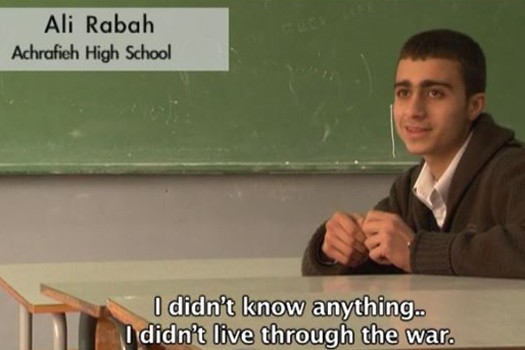 By Christalla Yakinthou and Lynn Maalouf

State dysfunction and latent fear of political violence have been constant markers of public life in Lebanon since the end of the war in 1990. But with a debilitating economic crisis, no sitting president since March 2013, a parliament that has twice auto-prorogated its mandate, years of war in neighboring Syria, and an unprecedented humanitarian crisis with an estimated 1.3 million Syrian refugees spilling across the border into Lebanon, the tension has mounted. Related to all of this, we are seeing an increasing sense of fatigue over politics that has driven the younger generations into the streets to call for social change.

The fear of a resurgence of war, shared by multiple generations of Lebanese, is affirmed every few years by the outbreak of armed conflict. In 2013, for example, a period of supposed “peace” (or at least “cold conflict”), 229 people were killed and more than 4,000 wounded in various armed clashes and explosions across the country.

But a more far-reaching problem derives from persistent structural, political, economic, and societal factors. Even 25 years after the signing of the Ta’if National Reconciliation Accord, which ended the 15-year succession of conflicts in Lebanon that began in the mid-1970s, few domestic safeguards have been put in place to eliminate, or at least minimize, the country’s risk of renewed conflict. No attempts to address the causes of persistent violence have been made. In many ways, the recent “You Stink” protests across Beirut have been a reaction to the climate of endemic collusion and corruption among political elites that followed the conflict.

This enduring state of “brokenness” has a significant impact on both efforts to address the legacy of conflict in Lebanon and attitudes about confronting the past. Between 1990 and 2005, there was little space to set up any sustainable or effective mechanisms under the spectrum of transitional justice tools to address the war—indeed, the period was marked by an amnesty law, two parallel foreign occupations, an accompanying repression of opposition voices, and a continuity of perpetrators’ rule in peacetime (not to mention a judiciary largely perceived as corrupt or politicized). While there were some initiatives, they were far from being part of a comprehensive approach to dealing with the past.

What all this means is that while the country is post-peace agreement, it is not by any stretch of the imagination “post-conflict.” This impacts the ways in which different communities in the country—and the government itself—understand and speak about Lebanon’s recent past, its present, and its future.

Without a Common History Curriculum

Young people in Lebanon are growing up with scant knowledge of the country’s history. Students have repeatedly voiced their dismay at this, and teachers have had to forge their own paths to respond to students’ curiosity and questions. One history teacher we spoke with talked about organizing seminars as a way to respond to questions: “It’s essential if we want to educate [students] so as to become entirely Lebanese citizens. They need to understand what happened to prevent it from recurring.”

The Ta’if Agreement set as a priority the development of a common national history curriculum, which was particularly important given that the last official history textbooks were published in the 1970s. Those textbooks are still being used today. However, as with many efforts at reform in Lebanon, the process of developing the history curriculum stalled. Though there have been a number of initiatives, no curriculum has made its way through to classrooms. Official history textbooks stop at 1943, the date of Lebanon’s independence at the end of the French mandate.

Paradoxically, the lack of an overarching curriculum has opened space in classrooms to explore new methods of teaching the country’s history and especially to promote “multi-perspectivity” in education. In the absence of any discussion about the war in classrooms, several non-official initiatives have attempted to fill the void.

Collecting Stories of the War

It was in this context that the oral history project “Badna Naaref” (We Want to Know) was conceived, to give students the tools to explore and unpack the country’s layered silences. The project, organized by the International Center for Transitional Justice (ICTJ) in partnership with the Lebanese nongovernmental group UMAM Documentation and Research and Saint Joseph University’s Center for Modern Arab World Studies (USJ/CEMAM), was activist in its framework and pedagogical in its methodology.

With “Badna Naaref,” students were responsible for collecting testimonials from parents, grandparents, and others and creating an archive of lived histories of the war in Lebanon. The project’s title purposefully hints at a certain rebelliousness—expressing the idea that the youth were raising their voice to demand their right to know what happened in their country, and if this was not happening in their classrooms, then for it to happen in their homes.

Run from 2010 to 2012, “Badna Naaref” sought to raise awareness of young people about the implications of living through a war and to foster greater empathy with their elders’ experience. It was designed as both an oral history and a truth-seeking project for the students and a truth-telling process for those being interviewed. For many participants it was the first time they talked about their experiences during the war.

The project focused on aspects of daily life during the war, experiences which any person who had lived in Lebanon at the time would be able to identify with, or at least recognize. This was important, because people in Lebanon tend to perceive few commonalities among Lebanon’s different communities today. A dangerous culture of deep “otherization” prevails alongside a strong feeling that only one’s own community has suffered.

Common issues that interviewees reported to students included moving between the two divided parts of the city, crossing checkpoints, dealing with the rationing of water and food, living in shelters, and communicating with family and loved ones. These themes were chosen because they would not only increase participants’ insight into what it meant to live in a state of war, but also to increase their knowledge of their parents’ and grandparents’ experiences. In total, 44 students between the ages of 15 and 16, representing 12 schools in the greater Beirut area, participated in the project under the supervision of their teachers. The schools included diverse ethnic (Armenian, Palestinian, and Lebanese), religious, and private/public school representation.

The goal was to collect “human” stories of the war—stories about situations people had lived through but did not necessarily talk about at home. While a number of interviewees talked extensively about the injustice and violence they witnessed or experienced during the conflict, it was not a topic students directly asked about. The students were encouraged also to think about ways to use the material they collected beyond archiving it. Teachers were encouraged to do the same and to think of ways in which the project could be shared within their schools with a larger number of students.

Ultimately, 150 audio testimonies were recorded in a combination of French and Arabic, which were developed into an oral history archive, an unprecedented pool of material drawing on “stories from below.” The interviews were transcribed and then translated from the original language so that they would all be available in Arabic, French, and English. The transcripts and summaries were made fully anonymous, in order to protect individuals who had shared their stories. When the material was ready, a website was built to showcase the project and increase public awareness. The archive is based both at UMAM and USG/CEMAM.

For many students this was the first time their families had spoken to them about their experiences of the war. For one student, Nour Hajjar, the project gave her insight into her own history. She shared: “[It allowed me to] communicate with my family circle about the war. I also discovered the ‘hidden’ part of my personal history and that of my country. Finally, this project has taught me to treat my elders with more respect.”

For many students (and some project staff), an end-of-project field trip to south Beirut became a forum for exchange and learning. It was, for a brief period, a “safe” zone, where students from different groups who would not normally interact with each other were able to meet and swap stories. The space itself was designed to build on the core purpose of the activity, to demystify the “other,” share experiences with other people in Lebanon, and build relationships across borders so that the youth in the country are less inclined to be drawn into sectarian violence.

PHOTO: Ali Rabah, one of the students who participated in the Badna Naaref project, discusses his takeaways.