As part of a special podcast series on complementarity, ICTJ speaks with Tarik El Tumi, program director for the Libyan NGO Lawyers for Justice, about the capacity of the Libyan judiciary to address the legacies of the Gaddafi dictatorship and the role the ICC can play in facilitating this process. 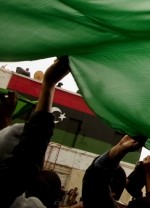 In an effort to advance the dialogue on ensuring accountability for crimes against humanity and genocide, ICTJ has launched a special podcast series on complementarity—a principle placing responsibility for prosecution of serious crimes at the national level. At the recent high-level meeting held at the Greentree estate in New York, ICTJ spoke with some of the leading global voices on justice.

The first podcast included questions addressing the way forward in complementarity, and what the role of the International Criminal Court (ICC) and development agencies should be in pursuing accountability for mass atrocity at the national level.

For the second podcast we spoke with Tarik El Tumi, program director for the Libyan NGO Lawyers for Justice, about the capacity of the Libyan judiciary to address the legacies of the Gaddafi dictatorship and the role the ICC can play in facilitating this process.

Because of the manner in which it was used during the dictatorship, Libyans have lost trust and confidence in the judiciary, El Tumi said. Additionally, lack of vocational training under the regime has left much of the legal sector without basic skills, such as interviewing a victim or torture or someone who has allegedly committed an atrocity.

However, he asserted, "With the right technical assistance and the right initiatives for capacity building from the international community—from the ICC, the UN, and the international development community—as well as from Libyan lawyers from the diaspora, we can help them develop their capacity in such a way as to meet the challenges of post-revolutionary Libya."

Addressing the role of the ICC in post-dictatorship Libya, El Tumi spoke directly to the importance of employing the complementarity principle:

Listen to the podcast:

In the next podcast we speak with Binta Mansaray, registrar of the Special Court for Sierra Leone, on the challenges and opportunities for employing the complementarity principle in Sierra Leone.

Photo: Cheering in the center of Benghazi April 03, 2011. Photo by Eivind H. Natvig/MOMENT.