As Yemen prepares to embark on a national dialogue about its future, addressing the legacy of the past human rights violations remains one of its key challenges. A Law on Transitional Justice and National Reconciliation has been under discussion since February 2012 and may now be adopted in the coming weeks.

As Yemen prepares to embark on a national dialogue about its future, addressing the legacy of the past human rights violations remains one of its key challenges. A Law on Transitional Justice and National Reconciliation has been under discussion since February 2012 and may now be adopted in the coming weeks.

Yemen has a long history of political violence and human rights abuses, both before it became a unified state in 1990, and since—including during a civil war in 1994. Grave abuses, including the killing of unarmed demonstrators, also took place during the uprising which started in January 2011 and led to the removal from power of former president ‘Ali ‘Abdullah Saleh.

The Gulf Cooperation Council (GCC) initiative, agreed by the key political factions in Yemen and endorsed by the Security Council last October, provides for a political transition and requires steps on transitional justice and “measures to ensure that violations of human rights and humanitarian law do not occur in the future.” As part of this initiative, Saleh resigned in exchange for total immunity from prosecution.

In June 2012 the Security Council urged the Yemeni government “to pass legislation on transitional justice to support national reconciliation without further delay.” The text of the proposed Law on Transitional Justice and National Reconciliation had been amended after some public consultation, but the cabinet failed to reach consensus on its adoption. The law is now with President 'Abd Rabbuh Mansur Hadi, who has the authority under the GCC initiative either to adopt the law immediately or sent it to Parliament for debate.

The latest text of the draft law provides for a truth commission to look into abuses going back to 1990. However, one of its clauses allows for investigation of prior events if individuals are still suffering the consequences of violations which took place before 1990.

The commission will also develop a reparations program for victims, ranging from material compensation to apologies and memorials, and make recommendations for institutional reforms. It is to be composed of 11 members, 30 percent of whom should be women, and work for a term of four years which could be extended by further two years. It would have the authority to compel testimony or the release of documents, and would publish draft reports inviting comments from civil society organizations and the public at large.

The draft transitional justice law incorporates Law No. 1 of 2012 which precludes the prosecution of former president ‘Ali Abdullah Saleh and his associates, shielding them from criminal accountability for breaches of international law. This immunity was a condition of the GCC agreement endorsed by the Security Council, although it breaches international law and Yemen’s international human rights obligations. There has been considerable opposition within civil society to this immunity.

“While regretting the Immunity Law which shields possible perpetrators of serious abuses from criminal accountability, we welcome the fact that the draft law on transitional justice addresses the importance of truth-seeking and reparations, as well as the recognition of the need for institutional reform,” said Claudio Cordone, program director at ICTJ.

The Yemeni government is also considering a decree to set up a commission of inquiry into the events since street protests began in January 2011, an action that was also demanded by the Security Council. The body would be expected to complete its work within two years and contribute its findings to the report of the work of the broader commission provided for by the draft law under discussion.

As part of the debate on transitional justice in the country, the Yemen Center for Transitional Justice (YCTJ) organized a conference on June 14. In the conclusions of the conference, the YCTJ urged President Hadi to delay the issuing of the law on transitional justice until further public debate takes place on its provisions. Some of the participants also proposed transferring the draft law to the upcoming National Dialogue Conference, which is to take place in the coming months. 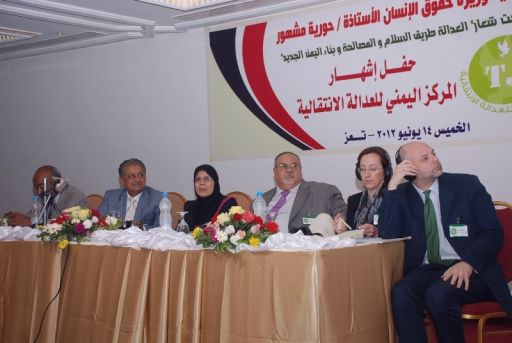 *Participants at the Inauguration conference of the Yemeni Center for Transitional Justice, Ta’iz 14 June 2012.* As part of ICTJ’s effort to support transitional justice processes in Yemen, Program Director Claudio Cordone and MENA Deputy Director Anne Massagee attended the YCTJ conference. Outside the conference, the ICTJ team met with Prime Minister Muhammad Basindawa, as well as with Hooria Mashhour and Mohammed al-Mikhlafi, Ministers of Human Rights and Legal Affairs respectively, to discuss the proposed legislation and plans on transitional justice in Yemen, as well as ways in which ICTJ could provide technical assistance in the coming months.

ICTJ also met with representatives of civil society organizations, including the YCTJ; the Yemeni Observatory for Human Rights; the Transitional Justice Initiative, which is affiliated with the Civic Democratic Initiatives Support Foundation; and the Sisters Arab Forum for Human Rights. In addition, the delegates discussed transitional justice issues with Yemeni activist and Nobel Laureate Tawakkol Karman.

“We look forward to working further with civil society partners and the Yemeni authorities as they debate the best way ahead to address the complex but fundamental issues of seeking truth and justice for the abuses of the past,” said Anne Massagee.