ICTJ: Conviction of Ríos Montt on Genocide a Victory for Justice in Guatemala, and Everywhere

The International Center for Transitional Justice (ICTJ) welcomes today’s verdict in Guatemala by the High Risk Court in the trial of former military dictator José Efrain Ríos Montt. The 86-year-old ex-general was convicted of genocide and crimes against humanity against the indigenous Mayan Ixil population during Guatemala’s Civil War. He was sentenced to a total of 80 years in prison. José Mauricio Rodríguez Sánchez, the co-accused, who headed military intelligence under Ríos Montt, was found innocent. 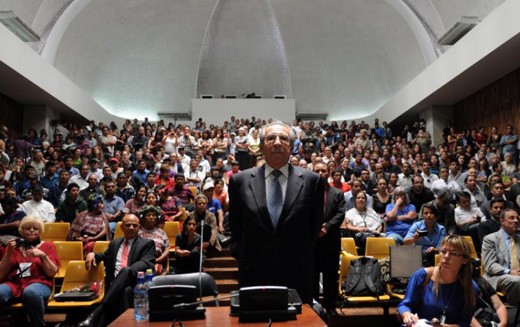 New York, NY, April 18, 2013 – The International Center for Transitional Justice (ICTJ) welcomes today’s verdict in Guatemala by the High Risk Court in the trial of former military dictator José Efrain Ríos Montt. The 86-year-old ex-general was convicted of genocide and crimes against humanity against the indigenous Mayan Ixil population during Guatemala’s Civil War. He was sentenced to a total of 80 years in prison. José Mauricio Rodríguez Sánchez, the co-accused, who headed military intelligence under Ríos Montt, was found innocent.

A three-judge panel found retired army general Ríos Montt guilty on all charges, which stemmed from the massacre of 1,771 Mayan Ixils, massive displacement, and subjecting the Ixil group to conditions designed to destroy it. The actions were part of military plans in 1982 – 1983 to eliminate not only the guerrilla forces in the internal armed conflict, but anyone suspected of supporting their objectives. It is estimated that in the course of the three-decades of armed conflict some 200,000 people were killed or forcibly disappeared, the vast majority of them indigenous Maya.

“This was the first time that a former head of state has been tried for genocide in clearly genuine national proceedings. Despite the many obstacles, its success shows the importance of justice being done nationally, even when the odds are long. It is a great leap forward in the struggle for justice in Guatemala and globally,” said David Tolbert, president of ICTJ. “Today will be carved into the history of the fight against impunity for mass atrocities as a victory for victims in this country, and for all who care about the state guaranteeing, rather than abusing, the fundamental rights of citizens.”

Presiding Justice Yassmín Barrios, together with the two other judges on the tribunal, based the guilty verdict on the evidence presented that Ríos Montt ordered the plans that led to genocide, and that he had full knowledge of the massacres and other atrocities being committed, yet did nothing to stop them despite having the power to do so.

The Association for Justice and Reconciliation, a group of victims and survivors of the genocide, and the Center for Legal Action on Human Rights (CALDH) were instrumental in the process. They investigated the atrocities, brought cases to prosecutors as far back as 1997, and continued to develop them over the ensuing years. Great credit also goes to Guatemala´s current Attorney General, Claudia Paz y Paz, and her team, who had the commitment and will to prosecute the crimes.

“This has been a long process, where victims who came together to seek justice have honored their innocent loved ones. It has taken enormous courage and diligence. The prosecutors and judges deserve great credit for doing their job under very difficult circumstances. The trial is part of Guatemala’s difficult struggle to face the truth, but with this historic judgment, the space for racism and denial is smaller, and the dignity and rights of those persecuted by a racist state are recognized,” said ICTJ Vice President Paul Seils.

A coup brought Ríos Montt to power in March 1982, making him the de facto head of state until August 1983. During his 17-month rule, one of the bloodiest periods in Guatemalan recent history, he led a counterinsurgency against leftist guerrillas, which saw a dramatic increase in violence against civilians.

Although the crimes had been committed over 30 years ago, the court heard testimony from dozens of massacre survivors, some of whom were young children when Guatemalan forces attacked and razed their villages. Their stories helped show that the military considered all Ixil civilians, including children, to be legitimate military targets. The trial also heard particularly horrendous evidence of the widespread practice of rape that occurred during massacres and as part of the military occupation.

“Judge Barrios said today that all of Guatemala was harmed by these crimes. Today, all of Guatemala should now be proud of the capacity of its institutions and the courage of the authorities who prosecuted and tried this case,” explained Marcie Mersky, ICTJ Program Director. “Despite the many difficulties and remaining legal challenges, Guatemala has set an example for the region and the rest of the world in the struggle for accountability.

The trial comes fourteen years after the UN-sponsored Historical Clarification Commission concluded that agents of the Guatemalan state had committed acts of genocide against the Mayan Ixil people and other ethnic groups, and that the state had an obligation to investigate and sanction those crimes.

The International Center for Transitional Justice works to redress and prevent the most severe violations of human rights by confronting legacies of mass abuse. ICTJ seeks holistic solutions to promote accountability and create just and peaceful societies. For more information, visit www.ictj.org

Paul Seils, ICTJ Vice President. Seils spent nearly five years in Guatemala (1997-2002) as legal director of one the country’s main NGOs, designing and directing investigations on behalf of victims into massacres committed by the military during the civil war.

Marcie Mersky, ICTJ Program Director. Mersky worked in Guatemala for more than 20 years, including for Guatemala’s Commission for Historical Clarification.